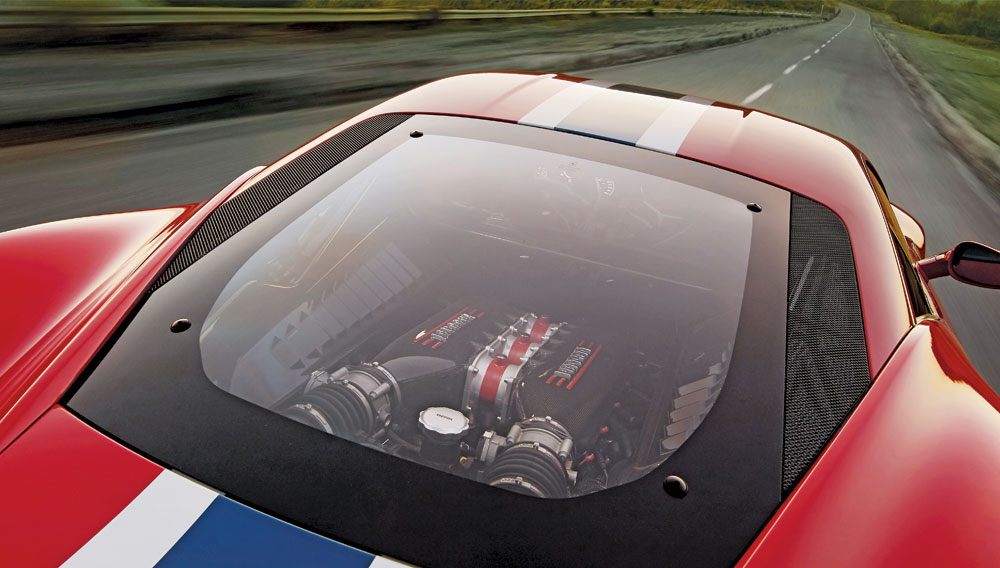 Ferrari’s mid-engine V-8 cars have always been its sportiest machines, beginning in earnest with the 308 GTB/GTS series that was in production from 1975 through 1985 and is just now receiving its due as one of Pininfarina’s finest designs. The F355, which debuted in 1995, proved that a Ferrari really could be a daily driver. The 360 Modena ushered in Ferrari’s slippery design vocabulary of the 21st century in 1999 and became the brand’s best-selling model ever—until it was superseded in sales by the Frank Stephenson–designed F430, which replaced it in 2004.

Amid great anticipation, the technologically advanced 458 Italia arrived in 2009 and was later chosen as Robb Report’s Car of the Year. The Italia remains an archetypal sports car, a jewel in any collection of contemporary high-performance machines. Now comes the 458 Speciale, a more extreme and purpose-built iteration of the 458 Italia. It is a beautiful berlinetta that exceeds the limits of any previous Ferrari V-8.

The 458 Speciale’s engine is Ferrari’s most powerful naturally aspirated V-8. The mid-rear-mounted 4.5-liter unit produces 596 hp (the Italia’s engine develops 562 hp) and 398 ft lbs of torque at 6,000 rpm. It winds to a dizzying 9,000 rpm redline and has an incredible compression ratio of 14:1, which is the highest ever achieved by a naturally aspirated V-8 and a value typically associated with only race engines.

Applying lessons learned from the company’s Formula 1 racing program, Ferrari’s engineers redesigned various components to extract the most from the engine. They introduced new metallurgy for the pistons and connecting-rod bushings to reduce friction and mass. A revised crankshaft improves lubrication of the main bearings. The manifolds and heads feature modified intake geometry, and the four cams have a new profile. The intake plenums and air-filter box are made of carbon fiber, which, when combined with the aluminum exhaust system, reduced the engine’s weight by 18 pounds.

The 458 Speciale’s 7-speed F/1 dual-clutch transmission is the best in the business and part of the reason the car is such a thrill to drive. It has been remapped, and compared to the Italia’s transmission it delivers downshifts that are 44 percent faster—and louder, thanks to a redesigned inlet tract and repositioned exhaust plumbing.

These power-train upgrades have resulted in remarkable performance that includes a zero-to-60-mph time of less than 3 seconds and a top speed of 202 mph. The Italia reaches the same top speed but achieves 60 mph in just under 3.4 seconds.

For such a powerful machine, the 458 Speciale has a relatively light dry weight of only 2,844 pounds (versus 3,042 pounds for the Italia), resulting in a power-to-weight ratio of 0.021 hp per pound and contributing to a lap time of just 1 minute, 23.5 seconds at Ferrari’s 12-turn, 1.9-mile Fiorano test track. That is the third-best time ever for a Ferrari road car, behind only those of LaFerrari and the F12 Berlinetta.

Although the 458 Speciale is a cousin of the Italia, almost every panel of its fluid bodywork is new. Most notably, the 458 Speciale’s front and rear composite bumpers are different from the Italia’s, and the hood features two deep outlets that are designed to extract air flowing through the radiator. Next to each headlight is a trio of louvers that function as air outlets. They recall the signature slats of the 250 GTO and F40 and prove that some aerodynamic solutions are always in style. The rear of the 458 Speciale is distinguished by a full-width grille, a prominent Kamm tail, and a pair of wide twin exhausts that exit above the large-finned rear extractor.

Ferrari’s patented mobile aerodynamic systems increase downforce when the car is cornering and reduce drag to a minimum when it is traveling on straights and at speed. These systems include one horizontal and two vertical flaps at the front of the car, which automatically open or close as radiator-cooling and downforce requirements dictate. The large-surface rear spoiler increases downforce, and the repositioned tailpipes allow for a much larger rear diffuser, which improves extraction flow from the underbody.

The 458 Speciale is easy to drive because of its aerodynamics and because it is the first Ferrari production model to employ the company’s Side Slip Angle Control feature. The system’s software analyzes dynamic data—including lateral acceleration, yaw angle and steering-wheel angle, and speed—and then distributes traction and torque to the rear wheels in a way that optimizes the car’s performance and control. The benefits of the system are especially apparent when driving the 458 Speciale at or near its limits on challenging, twisty roads with camber changes and other surprises.

As with all modern Ferraris, the steering wheel of the 458 Speciale features the manettino, a small rotary toggle with which drivers choose the car’s driving mode: Wet, Sport, Race, CT (traction control) Off, or ESC (electronic stability control) Off. While the Race setting affords maximum grip, Sport is the preferred setting for street driving.

The base price for the 458 Speciale is $288,000. The test car was painted a brilliant Rosso Corsa with a blue-and-white racing stripe down its centerline. It also featured additional carbon-fiber bodywork and other options that raised the price to more than $336,000.

The cockpit was strictly race derived and featured carbon-fiber-shelled racing seats with serious side bolsters and shoulder extensions. While the cabin included such signature Ferrari details as contrasting hand stitching on the seats and dash, there was no carpeting, not even floor mats. Instead, the floor was covered with gray, triangular-patterned aluminum plates that provided extreme grip and looked perfectly appropriate for a vehicle that is as much racer as it is road car.

Celebrating 60 years in the United States

A number of automobile marques and models have celebrated significant anniversaries recently. Aston Martin, Maserati, and Morgan each turned 100, while the relative upstart Lamborghini toasted its first 50 years, as did the Porsche 911 and the Ford Mustang. Chevrolet’s Corvette recently blew out 60 candles on its cake, and in October, Ferrari marked 60 years in the United States by introducing a $3.2 million special-edition model that is exclusive to the U.S. market. Prior to the unveiling, it was reported that each example of the car (which Ferrari has not given a name) would be painted blue with white stripes down the center. The color scheme replicates the livery of Ferrari’s North American Racing Team, which competed in the United States and Europe from the late 1950s to the early 1980s and helped to popularize the brand in this country.

Enzo Ferrari built the first car bearing his name in 1947, at the urging of his close friend Luigi Chinetti, a racecar driver and former colleague at Alfa Romeo. Recognizing that affluent U.S. auto enthusiasts and racers would embrace Ferrari’s high-performance Italian sports cars, Chinetti later became the first to distribute the brand’s automobiles in the United States, opening a showroom in Midtown Manhattan in 1954. With support from the factory—and to further promote the brand and his business—Chinetti later formed the North American Racing Team, better known as NART. It was a successful venture that claimed victories in numerous competitions, including the 1965 24 Hours of Le Mans.

During the formative 1950s, Ferrari introduced its largest, most powerful cars of the time with names that reflected the importance of the U.S. market: the America, the Superamerica, and the original California. The United States has since become Ferrari’s largest market.

The special anniversary Ferrari was unveiled in California—the largest U.S. market for Ferrari—at a gala in Beverly Hills. Its production will be limited to 10 examples, all of which have already been sold.