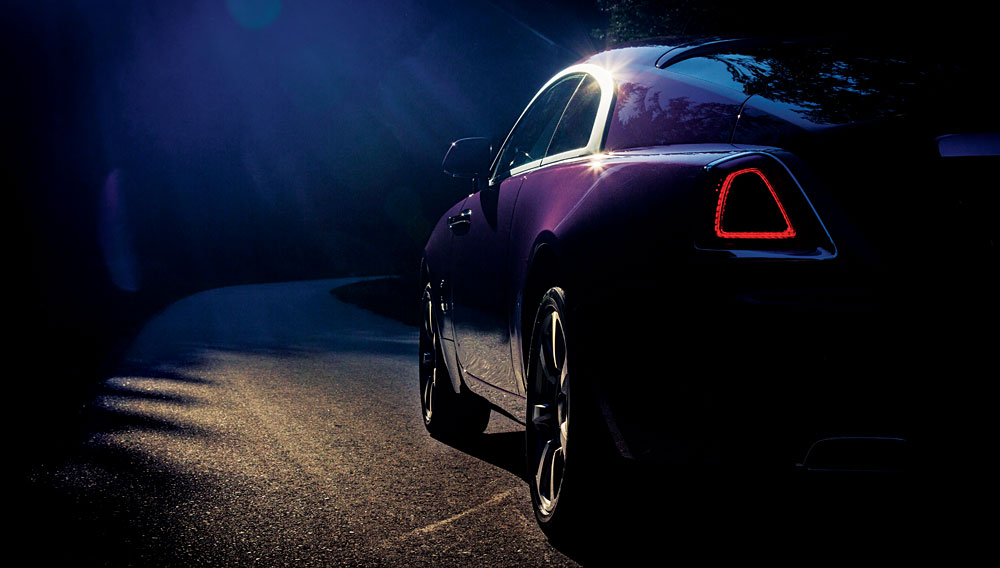 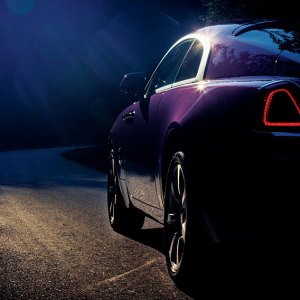 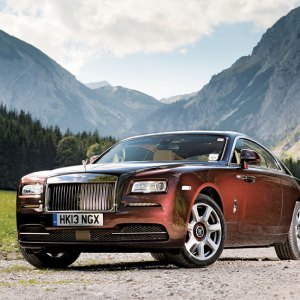 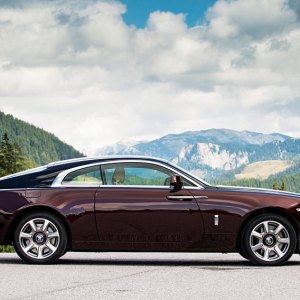 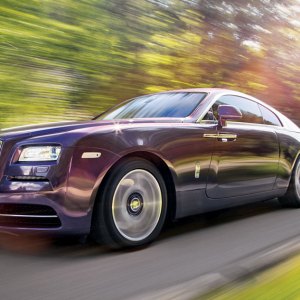 My lords, ladies, and gentlemen: Rolls-Royce Motor Cars, auto manufacturer by appointment to Her Majesty Queen Elizabeth II, has the honor of announcing the addition of the 2014 Wraith to its spectral family of Phantoms and Ghosts.

Formality stops here. Strike the Union Jack and case the colors. Loosen that old school tie. Start the renovation of Downton Abbey. For with the delightful, radical Wraith, Rolls-Royce has gone modern.

Consider this a calculated break with tradition after more than a century of making haughty products displaying uptight Edwardian styling—the loosening of stiff upper lips. Clearly, it is another example of a global corporation recognizing a generational shift and then daring to brush off the fustiness and moss that have grown on its ancient pedigree.

The Wraith is the fastest and most powerful Rolls-Royce ever. The wheel is smaller and thicker than those that steer the Ghosts and Phantoms; it is designed for today’s driving techniques. Suspension tweaks and adaptive systems allow it to go faster than any other Rolls-Royce model. They even permit the Wraith to get a little frisky on rural roads.

Wraith is an old name for Rolls-Royce. The company first used it for some 500 rolling chassis that it built in the late 1930s. They were bought by owners who added bodies from the top coachbuilders of that era: H. J. Mulliner, James Young, Carrosserie de Villars, Hooper & Co., and Park Ward. The coachwork for those cars was customized, but seldom if ever did it depart from traditional Rolls-Royce design to the degree that the new Wraith does. The roofline cascades into a pure fastback. Never has there been a production Rolls-Royce with a butt so profound. Seeking to indulge their desire for the gran turismo look but unable to mine their own brand’s heritage for such a style, Rolls-Royce’s designers looked to Italy for inspiration and found it in Vittorio Jano’s 1950 Lancia Aurelia and Giorgetto Giugiaro’s 1967 Maserati Ghibli.

Compared to the standard-length Ghost, the Wraith has a wheelbase that is 7 inches shorter and a track that is slightly wider. A shorter wheelbase plus a wider track equals improved handling. And heavens to Charles and Henry (Rolls and Royce, respectively), with the correct combination of revs and road speed, a driver can coax a gentlemanly snore from exhaust pipes that look as though they were sized for a B17. The Wraith’s turbocharged 12-cylinder, 6.6-liter engine churns out 624 hp, enabling the car to storm from zero to 60 mph in an estimated 4.4 seconds.

But not by any stretch of interpretation can the Wraith be considered a sports car, not with a beam beyond 6 feet and a load just over 2.5 tons. Also, the car’s top speed is electronically limited to 155 mph, which is a piddling pace in this era of 200 mph personal transport. And Rolls-Royce did not build the Wraith to go grille-to-grille with the Bentley Continental GT and its various variants. A price comparison alone refutes that suggestion. The Bentley starts at $177,500; the Wraith’s base price is just under $285,000.

What the Wraith may do is establish the design language and engineering blueprints for future models that, Rolls-Royce anticipates, will attract younger owners. “It is for this generation,” says Giles Taylor, the director of design for Rolls-Royce and a recent arrival from the design department at Jaguar. “It is a car that allows them to retain their street credentials yet also is seen as a cool understatement.”

Adds Richard Carter, the company’s director of global communications: “It is a car of power, drama, and a little bit of the noir.”

If there is a key characteristic to the car, it is that hint of scoundrel. Rolls-Royce hammers home this theme in a promotional video for the Wraith. The setting is somewhere in Eastern Europe, in the middle of a dark and misty night. The headlights of a Wraith skewer the gloom as the car races along a treelined country road. Behind the wheel is a rake wearing a suit. A woman dressed elegantly for a red carpet, romance, or a secret tryst hears her ride and runs out of a château and through towering iron gates.

He stops the Wraith. She runs to the car. They pause, looking, breathing, almost steaming. Then the cad drives off without her, but she does not seem terribly upset. We are left to conclude that a little bit of noir is better than no noir at all.

The subliminal message, of course, is that this is an athletic two-door with enough pace and presence for a younger, sophisticated buyer. It is not for the chauffeur driven, and it is designed for social passages instead of business travel.

This colossus of a coupe comes with a host of electronic devices designed to keep drivers safe from themselves, the car’s mighty engine, and the 590 ft lbs of torque programmed to kick in at 1,400 rpm. These devices include electronic parking assist with cameras that provide a 360-degree view of the car’s surroundings, a suspension with double wishbones up front and multi links at the rear, and the new Rolls-Royce Satellite Aided Transmission. The system, which is linked to the car’s GPS, monitors the road for upcoming corners and curves and adjusts the car’s gears accordingly.

Rolls-Royce chose Vienna for the international launch of the Wraith, and once it had wriggled free from downtown’s clutter of trams and Gothic cathedrals, the car was able to roam the Alpine foothills. Awkward handling and floaty suspensions have plagued every Rolls-Royce model—old and modern—even the new Phantom Series II. The driver always has an acute awareness of the vehicle’s size and a fear that the car will not fit into whatever small traffic openings are ahead.

The Wraith resolves these issues. It is not a Ferrari, nor even a Ford Taurus, but it rides much flatter and handles more securely than other Rolls-Royce models. The steering has been tightened so that the driver is not guessing where the front wheels are pointing.

At one point during the 230-mile drive outside Vienna, the Wraith entered a two-mile tunnel that was reduced by roadwork to a single lane. The driving was dark and cramped, but the car navigated this potential pinball machine with encouraging aplomb.

During the rest of the drive, tight hairpins produced zero stumbles. Negotiating the turns was just a matter of settling the Wraith’s weight by slowing the car for two seconds longer than a smaller car requires, taking the turn a little wider to compensate for size, seeing the exit and setting the steering, and then powering out of the turn with purpose—in perfect balance and with total control.

Despite the Wraith’s abundance of muscle and torque, it applies that power gently. Boot it, and the Wraith feels as though it is traveling comfortably below legal limits even as it approaches 130 mph.

The Wraith’s performance is only one of the elements that Rolls-Royce believes will make it appeal to younger buyers. It has chairs sculpted with a hint of a Recaro shape to suggest a performance-driving seat. They are set in a cabin that is lined with Bolivian rosewoods and handpicked hides and makes other automobile interiors appear frumpy.

The optional series of two-tone paint schemes should not work on a car this large, this hefty. But thanks to a styling line that runs hip-high from front to back, the color separation is subtle enough to go nearly unnoticed. The effect is remarkable.

The Wraith’s front end is not as imposing as those of other Rolls-Royce models. The Parthenon radiator, a Rolls-Royce calling card for more than 100 years, has had its size reduced, its temple corners rounded, and its overall shape softened to add better proportions to the front end. Also, the vanes have been recessed deeper into the radiator shell for a less conspicuous look. “We may take the edge off and remove the arrogance of the grille,” says Taylor. “But we will never apologize for it.”

Though the Wraith is a rear-wheel-drive vehicle with no paddle shifters to play with and no suspension or power-train settings for weekend racing, Taylor insists that it is a game changer for Rolls-Royce. “The classical perception of our brand has been of a car that delivers a silent ride, with the elegance of its architecture delivering status,” he says. “Overstated in size, understated in design.”

But the Wraith, he says, shows “a sliver of modernity, a sense of architectural purity that is relevant to younger, more modern tastes.” He believes the car will help transition Rolls-Royce into a contemporary brand that appeals to younger buyers seeking performance and exceptional power. “There does come a time,” Taylor says, “when you must stop the hook to the past, including the design heritage, and start reinventing it.”