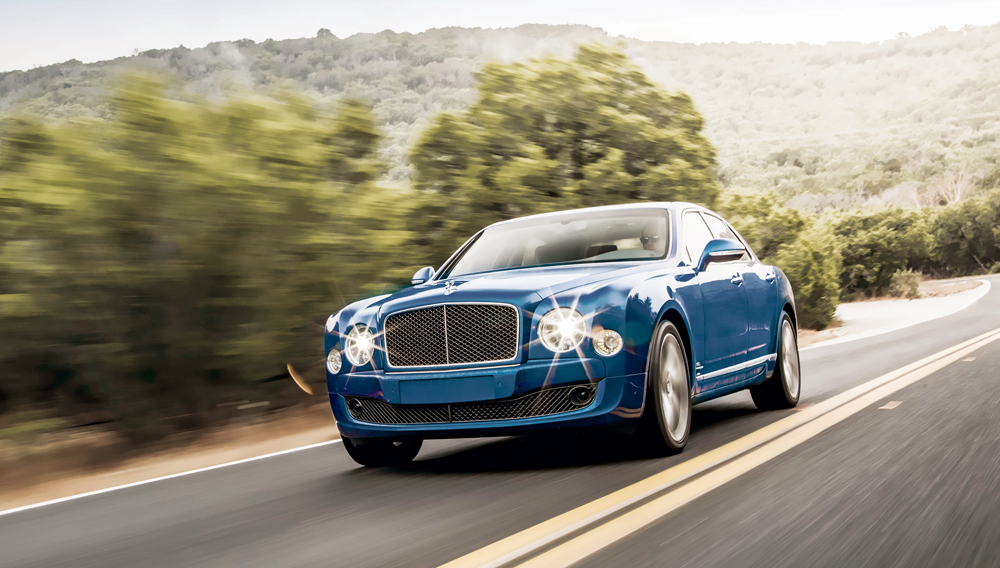 Bentley gives the Mulsanne a boost in power and performance.

The 3-ton, 18-foot-long Bentley Mulsanne Speed is a natural fit for Texas, where, as the saying goes, everything is bigger. But as this new, more powerful variant of the brand’s flagship sedan idles quietly in the pit lane at the 3.41-mile Circuit of the Americas racetrack on the outskirts of Austin, it seems out of place. Flamboyant as its styling may be compared to other luxury sedans, the Mulsanne Speed appears genteel and stately here on this March morning next to a lineup of racecars (including the Bentley Team Dyson Continental GT3) that will be competing later in the week in a Pirelli World Challenge event. The car’s size and its shape do not seem appropriate for navigating the track, an undulating circuit that features 20 turns.

With a quiet click of the shifter and a press of the accelerator pedal, Butch Leitzinger, the Bentley Team Dyson driver who is serving as chauffeur for three media members, eases the Mulsanne Speed through the pit lane. A gentle tug of torque pulls the car silently forward. When it reaches turn 1—a decreasing-radius, off-camber left-hander that flows into a high-speed right-hand sweeper—and Leitzinger presses the accelerator, the car shows a different side of its personality. It lurches forward, propelled by the staggering 811 ft lbs of torque that the twin-turbocharged, 6.75-liter V-8 sends to the rear wheels.

The Mulsanne Speed’s size-related limitations become apparent in the track’s S turns. Though the car glides smoothly over the bumpy curbing, it exhibits considerable body roll while negotiating the tricky series of tightening curves. An incline and a left-hand kink load up the suspension. Then a downhill stretch and a deep-braking turn lead to a sharp left-hander that opens to a 3,273-foot-long straight where a proper racecar can come close to 200 mph. The Mulsanne Speed does not approach that velocity, but as the tachometer climbs, the engine noise remains nearly imperceptible and the transmission’s shifts are fluid. Tapping the left paddle shifter engages the gearbox’s block shifting, which automatically selects preloaded downshifts for the various engine-rev ranges. More acceleration (and listing and tail squatting) squirts the Bentley through the last few corners before Leitzinger pulls it back into the pits, where the drivetrain’s metal components faintly tick as they cool.

Hurtling the hopped-up ultra-luxury sedan around the Circuit of the Americas reminds the assembled writers that Bentley has a racing team and a racing heritage; the sedan is named after the long straight on the 24 Hours of Le Mans circuit, where Bentley cars placed first five times from 1924 through 1930. The ride around the track also demonstrates the Mulsanne Speed’s capabilities, but in the real-world road test that follows, the Mulsanne Speed—not surprisingly—proves better suited to Texas’s high-speed interstates than the circuit’s serpentine layout.

The Mulsanne Speed has a starting price of about $335,600, which is roughly $32,000 more than that of the standard Mulsanne. The extra cost covers an increase in the V-8’s horsepower from 505 to 530 and the addition of 59 ft lbs of torque. The engine is paired with the reworked 8-speed automatic transmission. The Mulsanne Speed can accelerate from zero to 60 mph in 4.8 seconds and reach a 190 mph top speed. Complementing the drivetrain enhancements is the new sport driving mode, which stiffens and lowers the suspension, adjusts the steering feedback, and loosens the reins on the traction-control system.

The Mulsanne Speed is visually distinguished from the standard model by dark-tinted brightwork, rifled exhaust pipes, and Bentley’s first-ever directional wheels, which are milled from a solid block of aluminum. The cabin features the Mulliner Driving Specification trim’s quilted hides, carbon-fiber surfaces, knurled gearshift, organ-stop ventilation controls, and drilled-alloy foot pedals. As it does for the standard Mulsanne, Bentley offers a choice of more than 100 exterior colors, 24 colors for the interior’s leather, and 10 types of wood for the interior’s veneers; or owners can order bespoke colors for the exterior and interior. The cabin can also be finished with Bentley’s Entertainment Specification package, which includes twin electrically deployed picnic tables, a premium Naim audio system, and a pair of display screens mounted to the back of the front seats.

Such niceties notwithstanding, the Mulsanne Speed’s primary allure is its ability to run brisk sprints and quickly shrink long stretches of asphalt. On the highways outside Austin, it devours gaps in traffic and surges ahead with expedient nonchalance, like an athlete performing at a record-setting pace without shedding a drop of sweat.

The Mulsanne Speed’s capabilities make the 85 mph speed limit on Texas’s State Highway 130 seem low, and the car operates smoothly enough to embolden the meekest of motorists to reach that velocity and beyond and be whisked along in absolute comfort. While the need for a 190 mph ultra-luxury sedan is debatable, the desire for one is understandable, and it is satisfied by this uniquely capable machine.