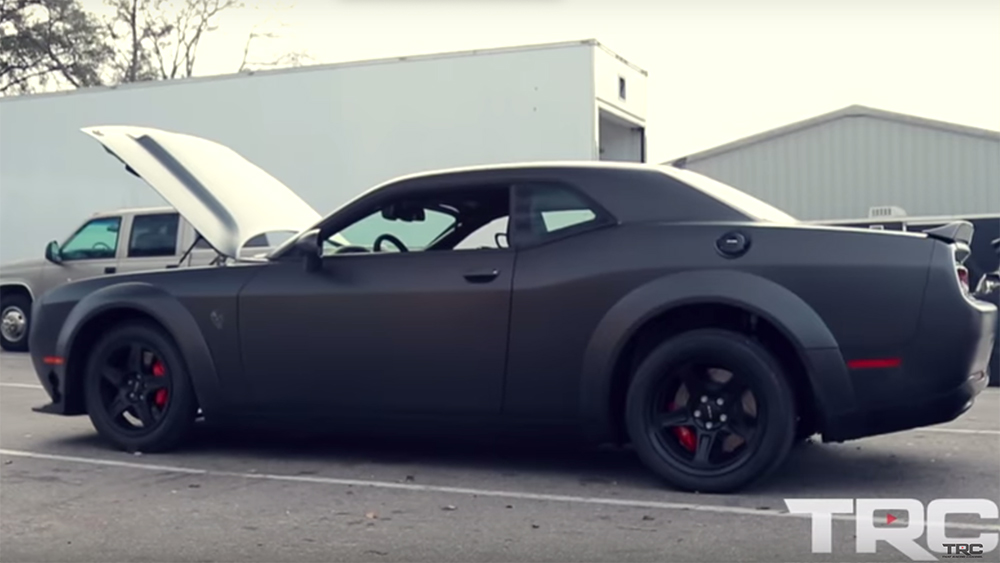 Speedkore, a Wisconsin-based performance group, wants to make everything lighter, more powerful, and subsequently faster, which is an approach we can back all day long. While the stock Dodge Challenger SRT Demon rolls off the assembly line with 840 horses available, more than capable of turning in sub-10 quarter times each and every pass, that wasn’t enough for the madmen over at Speedkore. Meet the ferocious twin-turbo, 1,200-horsepower Dodge Demon.

The build’s not completely new, as it debuted at SEMA already, but here’s a quick refresher on the specs before we get to the main event of seeing this terror get up and go down the drag strip: The Demon motor is stock except for a few tweaks, including ditching the supercharger in favor of twin Precision Billet ball-bearing T4 turbochargers, and a new intake to work more fluidly with the enormous puffers.

It’s running about 26 pounds of boost and that setup is good for 1,400 ponies at the flywheel and 1,203 at the tires, with 1,000 pound-feet of torque. Replacing all the body panels with carbon fiber helped to shave heaps of weight, while still maintaining the car’s stock look. Check out the build process in this video from Speedkore.

When it all comes together, the Speedkore Demon can throw down an 8.77 quarter at 162 mph, which is about a second quicker than the stock Demon’s 9.65 sprint. Those are impressive enough numbers, but The Racing Channel on YouTube gets behind and inside the carbon-drenched fever dream, and what’ll leave your mouth agape is the monster sound. If it sounds this good on video, we can only imagine what the aural experience is like in person. (Bring earplugs!) The below video features multiple runs down the strip, so you’ll have plenty of chances to hear the Demon roar (and watch the somewhat violent take-off from inside the cabin).