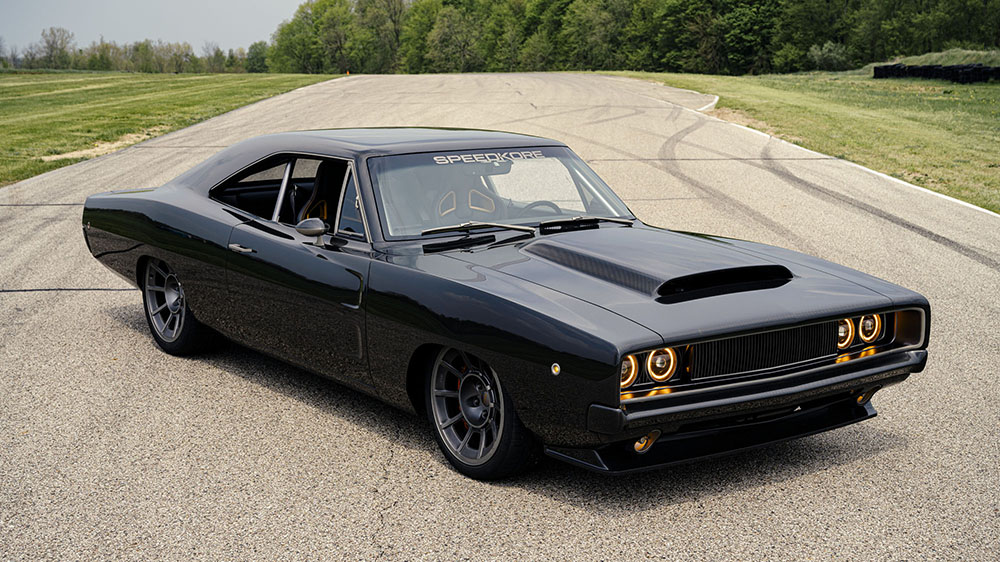 Speedkore knows exactly how to get the best out of a classic American performance vehicle.

The custom shop was enlisted by Stellantis design chief Ralph Gilles to help reimagine his 1968 Dodge Charger. The resulting restomod has been dubbed “Hellucination” and it’s as fast as it is mean thanks its 1,000 hp powerplant.

It makes sense that Gilles would turn to Speedkore to give the legendary muscle car some new life. Last year, the Wisconsin-based tuner built a similar car for Kevin Hart, though that one was based on the 1970 model year version of Dodge’s storied bruiser. The funnyman’s restomod is nicknamed “Hellraiser” because of its massive 426 Hemi engine and sinister blacked-out look.

Inside the 7.0-liter Hellephant V-8  Speedkore

Speedkore’s latest Charger restomod is powered by a 7.0-liter Hellephant V-8 mated to an eight-speed ZF automatic gearbox. The engine in Gilles’s car may be different than the one in Hart’s, but both pump out a hair-raising 1,000 horses. The vehicle is built on top of a Speedkore frame with perimeter reinforcements and has carbon-fiber body panels, as well as a hood, floor pan and wheel-well tubs made from the same material. Gilles also had the coupé outfitted with a double A-arm front suspension from Detroit Speed and a custom-made four-bar diagonal link setup in the back.

While muscle car aficionados will be able to spot all the subtle differences between the two Chargers, there’s no denying that Hart’s and Gilles’s rides look strikingly similar. But, with these two models, the devil is definitely in the details. The designer’s muscle car may look black from a distance but its carbon-fiber body has actually been finished in a glossy clear coat that allows you to see the material beneath. The headlamps and rear lights have also been replaced by Dapper Lighting LEDs that cast a ghostly glow. Finally, it rides on a set of custom-made HRE wheels wrapped in Michelin Pilot Sports 4S tires.

Inside the Hellucination you’ll find a carbon-fiber dashboard, door panels and seat backs. The vehicle’s two seats were made by Gabe’s Custom Interior and are done up in black and gray with orange contrast stitching, as is it’s the three spoke steering wheel which has the Speedkore logo at its center. The cabin has also been equipped with a 2,000-watt, six-speaker Kicker audio system.

Unsurprisingly, Speedkore hasn’t announced how much Gilles’s Charger cost to build, but did say it spent two years working on the vehicle, according to Road & Track. No price was announced for Hart’s Hellraiser, either, though a TMZ report at the time put the cost at “several hundred thousand dollars.” We’d imagine the Hellucination’s price tag is in the same neighborhood.

Check out more photos of the Hellucination below: