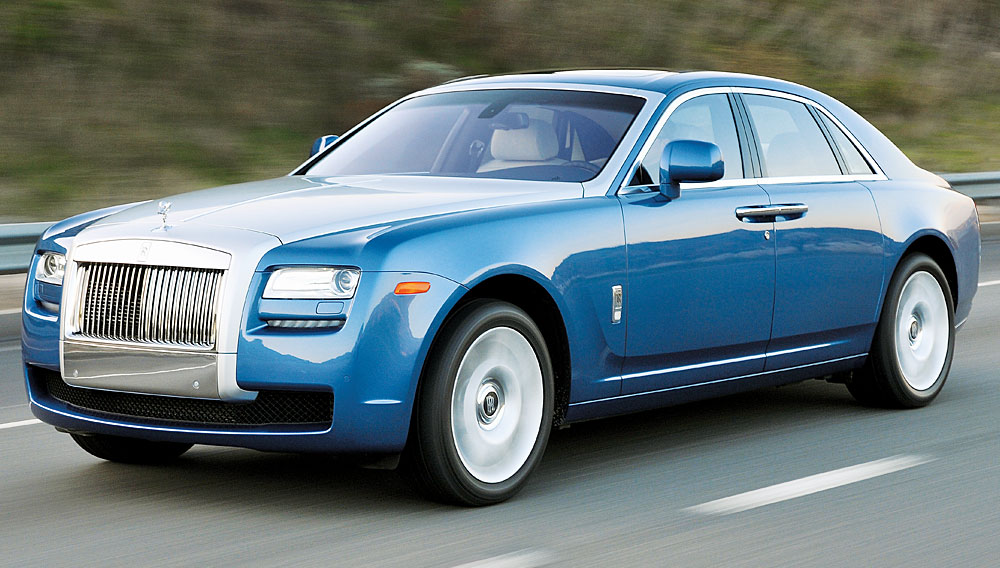 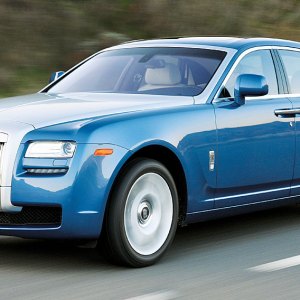 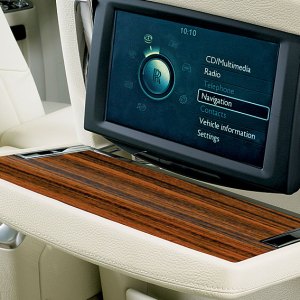 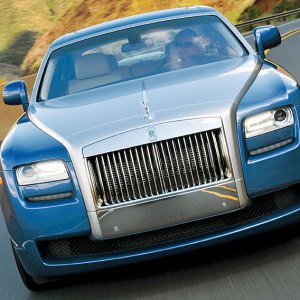 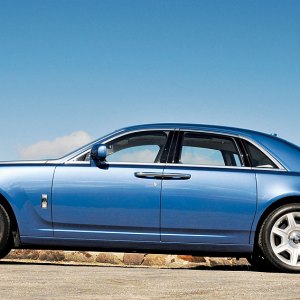 For Rolls-Royce, finding the golden mean between modernity and tradition in the development of a new automobile is critical. After all, consumers have, on the one hand, more than a century’s worth of products to inform their impressions of the marque and, on the other, the knowledge that the current incarnation of Rolls-Royce is not the company Henry (later Sir Henry) Royce and Charles Rolls founded in 1904, but rather, since 1998, an asset in the BMW automotive portfolio.

These and other factors loomed in our minds as we approached the new Rolls-Royce Ghost for a test-drive in Newport Beach, Calif., in March. That this model draws on the BMW 7 Series parts bins is no secret, but then the sharing of components among the different divisions of a large parent company is nothing new in the automobile industry.

Still, a Rolls-Royce is not like any other automobile, and we wondered if those charged with bringing the Ghost into production—some of whom worked directly for BMW before transferring to England—fully grasped that the special traits and qualities that make up the marque’s mystique are purely subjective and cannot be measured by sensors wired to a computer.

From the outside, the Ghost is all Rolls-Royce. Chief designer Ian Cameron and his staff have refreshed with sensitivity and skill a set of proportions and forms dating to the 1920s and ’30s. Much of the design language of the existing Phantom is replicated here, along with pronounced references to classic models, yet the whole amounts to far more than the sum of its parts. Here, the massiveness of the Phantom has been refined and even made lithe, almost athletic, in keeping with the company’s intended mission to make the Ghost more approachable.

As with the Phantom Drophead Coupé, designers reshaped the Ghost’s “Parthenon” radiator shell—a Rolls-Royce fixture from time immemorial—de-emphasizing its lines to some extent and recessing it slightly within the sculpted prow of the sedan. This change was not strictly a stylistic statement, but also partly a response to current European Union pedestrian-safety regulations. Purists who bear in mind the mandate for rounded surfaces and minimal projections will find the reinterpreted grille less grating. Thanks to Cameron’s sensitive touch, the Ghost’s frontal aspect still heralds the arrival of a genuine Rolls-Royce.

The car’s superb interior combines timeless elegance with 21st-century innovations. Traditional elements—supple leather, lambs-wool carpet, beautifully finished match-grain veneer, and classic instrumentation—coexist harmoniously with modern ones, including a system based on BMW technology that provides access to a wide array of operating systems via a large knob with selector buttons set around its circumference. Though the five-person seating capacity may seem paltry given the Ghost’s nearly 213-inch overall length and 77-inch width, this quintet of occupants will be a happy one: Each seat affords abundant personal space that can be climatically regulated by adjusting the individual heating and air-conditioning controls. The wide doors make ingress and egress convenient, and passengers in back need not worry about making potentially awkward moves to close the rear-hinged coach doors, as a small button mounted on the roof’s C-pillar directs an electric motor to perform that chore for them.

Prospective owners expect such creature comforts from the Ghost, but one aspect of the sedan may surprise them: Unlike the Phantom and many past Rolls-Royces, the Ghost aims to attract the owner-driver, rather than those who prefer to be driven. While this fact alters nothing for passengers, it changes everything for the individual who takes the wheel. Gratification begins the instant the driver presses the starter button and the automobile’s twin-turbocharged 6.6-liter V-12 powerplant comes to life.

Although Rolls-Royce historically has been coy about divulging power outputs, the company cheerfully proclaims that the 563 hp Ghost takes a mere 4.7 seconds to go from a full stop to 60 mph (a feat to which the big V-12’s 575 ft lbs of torque also contributes) and has a 155 mph electronically limited maximum velocity. Near silence remains the rule under most circumstances, but during those rare moments of distinct audibility, the engine sounds its own inimitable exhaust note—quite unlike that of a 12-cylinder Ferrari or, for that matter, BMW.

Some of the driveline and chassis components derive from the BMW parts bins, but, having been tuned for Ghost duty, they feel as though they are unique to this vehicle. An 8-speed ZF automatic transmission connects the engine to the rear wheels. The gearbox offers a superb array of ratios with almost undetectable changes between them—a fact that, no doubt, played a part in the designer’s decision to leave off the almost ubiquitous shift paddles.

The suspension is an even greater revelation than what lives under the Ghost’s hood. The sedan’s ride is remarkable, providing splendid isolation from all pavement irregularities and a near-total suppression of road noise—hardly a surprise given the reputation Rolls-Royces have for “wafting along” (a favorite phrase within the company). But the Ghost thrills the driver who wants to do more than waft, offering handling abilities that, if not sports-car-like, are at least classifiable as sporting. The secret lies with the four-wheel air suspension and the electronic system that automatically controls body roll. When hurried into a corner, the Ghost’s roll resistance stiffens, and both the rate and amount of roll are reduced, improving handling and driver confidence while leaving the softness of the ride virtually unaffected.

During our test-drive, we discovered that piloting the Ghost on a sinuous mountain road is more delight than duty. The steering, which delivered almost too much power assistance at a walking pace, became firm and precise as speed increased. Applying power through a corner did not upset the car, nor did midcourse braking and steering corrections. During these maneuvers, the car felt agile and relatively light—not at all as ponderous as its nearly 5,500-pound curb weight might suggest. In fact, the occupant of the front passenger seat remained fully relaxed and continually underestimated our cornering speeds.

These dynamic adjustments to the sedan’s performance take place without any intervention on the part of the driver, who need not choose, for instance, between normal and sport modes (perhaps more fittingly called waft and motor briskly modes). This Rolls-Royce leaves its driver feeling secure from any threat this side of a direct meteor strike and may well induce him or her to explore the far reaches of the car’s capabilities. Anyone so inclined, however, should be cautioned that the combination of smooth ride and sound insulation makes constant vigilance in speed-limited areas imperative. To stay within the limits of the law during our long runs, we made extensive use of the Ghost’s cruise control—a sophisticated active system that, among other features, offers radar assistance and, when necessary, brake intervention to maintain safe distances between the sedan and the cars ahead of it.

These considerations may distract some drivers from the Ghost’s plentiful other appointments. Tradition decrees that a Rolls-Royce sedan incorporate folding wood picnic tables and a superb audio system, and so the Ghost does. External cameras combine to generate an overhead view of the car that makes parking and other close-in maneuvers easier, while a night-vision camera displays its images on the navigation system’s screen. Additional safety and convenience features include lane-departure warning and automatic adjustment of headlamp settings to lighting conditions.

The only task the Ghost does not simplify is choosing one of 12 exterior colors to go with the hood and windshield pillars’ Silver Satin finish, which is not unlike the brushed-aluminum treatment used on the Phantom Drophead; however, in the Ghost’s case, paint—not polished metal—is used on the hood. Eight colors and five varieties of wood veneer are available for the interior. Bespoke editions of the Ghost will be made available eventually, but the company cautions, with its customary politeness, that requests for special features will not be allowed to compromise safety considerations or structural and exterior design.

The Ghost is expected to double Rolls-Royce’s sales volume in the years to come, though that volume will remain well below 3,000 cars per annum. With a list price of $245,000, the Ghost is hardly the “Rolls-Royce for the masses” that some in the press rumored it to be. Rather, it remains a handbuilt (or, more properly, hand-assembled and hand-finished) car in keeping with the marque’s long-standing traditions. In an age of machine-made modules pieced together by robots, the human element at the factory at Goodwood is reassuring.

We entered the Ghost with a healthy skepticism and, after a day of driving, emerged converted. The romance of being led along the highway by the Spirit of Ecstasy is genuine, and this latest model furnishes that emotion in abundance. This is an automobile meant for long-term use and enjoyment—an investment one can acquire secure in the knowledge that the bond between owner and car will grow more solid with time. The Ghost is a Rolls-Royce in every respect—one whose exhilarating, driver-oriented performance harks back to the delightful days of the Rolls-Bentley “silent sports car.”