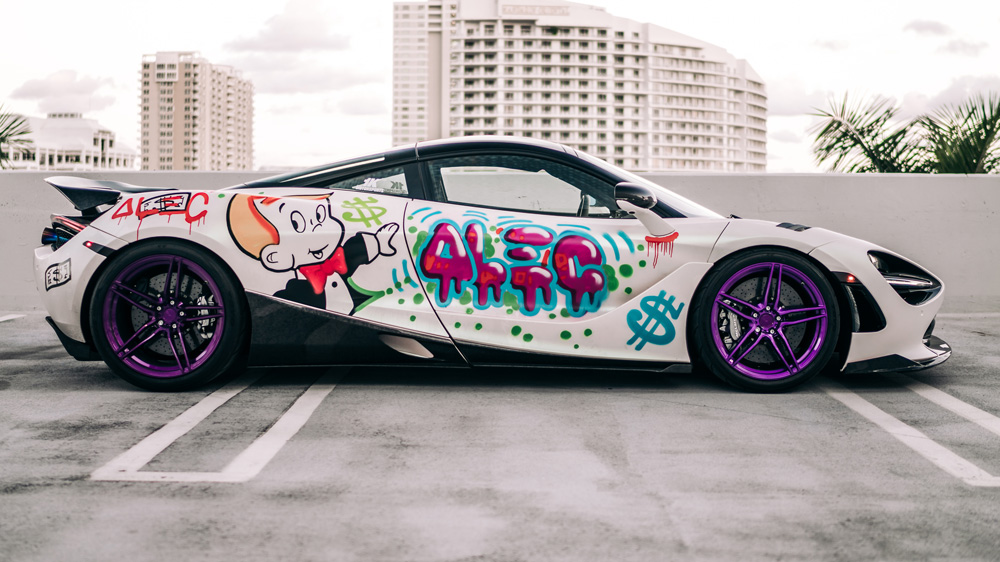 The team at Miami’s supercar body component specialist 1016 Industries, commissioned the artist to take his spray cans to the McLaren‘s pristine white bodywork and add some pizzazz to the world-famous art show.

Working out in the open in the city’s uber-cool Wynwood Art District, Monopoly, age 33, decorated the $300,000 720S with his signature top-hatted and money-clutching Rich Uncle Pennybags and Richie Rich characters.

Then, to showcase this wildly-colored 1,000 hp piece of art—yes, the McLaren‘s twin-turbo V-8 had been ‘chipped’ from the stock 710 hp—Monopoly and 1016 Industries CEO Peter Northrop took turns showboating it around Miami’s South Beach.

“I’ve never seen so many camera phones. People were literally jumping out in front of the car to take a photo,” explains Northrop. “Alec has a cult following in Miami and the car only drew more attention to him.”

Northrop told Robb Report that the McLaren had actually been commissioned by a New Jersey supercar collector who had already sent his Lamborghini Huracán and Ferrari 488 for the 1016 treatment.

Before the artist went to work, the 720S was equipped with1016 Industries’ full compression-process carbon body enhancements. Everything from new front and rear aero lips, to side skirts, a fender set, mirror caps, rear wing and rear diffuser. Total price: more than $65,000.

Graffiti artist Alec Monopoly poses in front of the McLaren 720S he painted for Art Basel.  Photo: Courtesy of 1016 Industries.

As for Alec Monopoly—real name Alec Andon—his ascent to fame began in 2008 at the height of the bank crisis, when he started using the Monopoly character as a metaphor for corporate greed.

These days, he has more than a million Instagram followers and celebrities like Miley Cyrus, Seth Rogen, Adrian Brody and Snoop Dogg collect his art—art that includes everything from cars, to painted Hèrmes Birkin handbags and TAG Heuer watch faces.

As for the decorated McLaren, Northrop explains that the car’s owner plans to eventually auction it to fund a new wide-body conversion by 1016 Industries on his second McLaren 720S. Because of the soaring popularity of the artist, Northrop estimates the car could sell for as high as $750,000.

“This really is a one-off; a very special car that has a huge presence on the street. It really is a piece of rolling art,” he notes.

But not every auction bidder might want a McLaren 720S decorated with graffiti-style art, so Northrop and his team did take one small precaution; before Monopoly did his work, they applied a removable white vinyl wrap to the car. At the least a rattle-can-painted Monopoly McLaren is more appealing than a $120,000 banana stuck to a wall with duct tape.