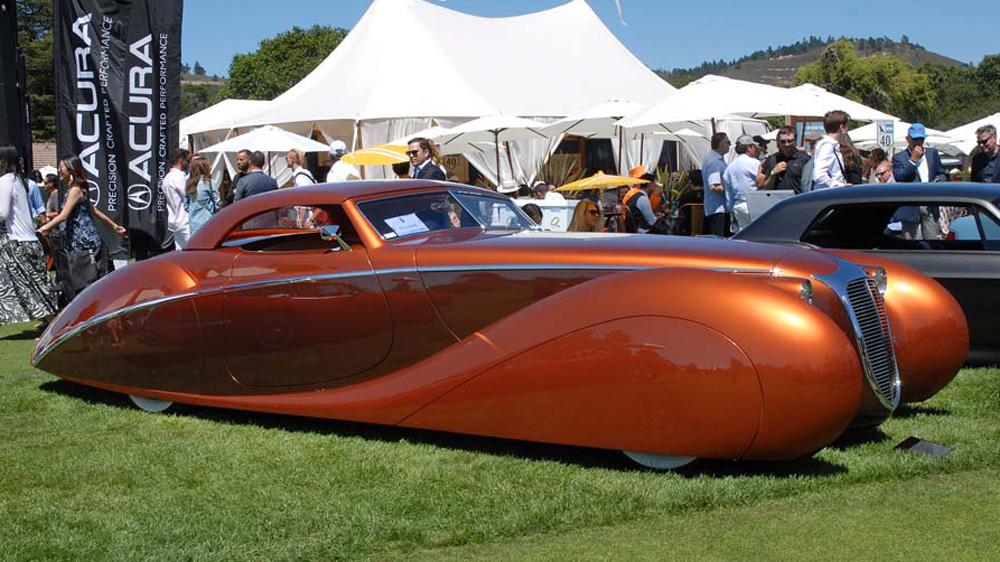 One of Monterey’s most exclusive annual car events, the Quail, a Motorsports Gathering once again brought together a couple of hundred exceptional automobiles and motorcycles to wow this year’s audience. Connoisseurs and neophytes alike were guaranteed to see vehicles never before encountered, proof that surprises remain in store for even the most seasoned concours-goer. And while Bentleys, Ferraris, Porsches, and what-not took center stage as they always do, a few unusual one-offs (or those nearly-so) with cameo roles were some of the most interesting actors in the 2019 show. Photographer Scott Williamson has captured some of our favorites.

The original Gandini-designed Lancia Stratos was not just the rally champion of the 1970s, it was the sexiest-looking rally car in history. The New Stratos is the first client-owned production vehicle built by Manifattura Automobili Torini (MAT).

This modern reinterpretation of the original Stratos retains that car’s signature styling cues, including a wedge-shaped body, fighter-cockpit windshield and round tail lights that punctuate the rear. A Ferrari 430 Scuderia V-8 engine powers the little rocket, in the spirit of the original Stratos’ Dino V-6. Owned by Robert Denson, Virginia.

California-based Diez Concepts, in collaboration with Fast cars, Inc., presents their take on the iconic Jaguar low-drag E-Type coupe. Of the 12 originals, 49FXN was the most famous, and designer Marco Diez’s Project OWL 226 is a modern interpretation of Jag’s original aerodynamic E-Type racer.

With a 380 hp, inline-6 engine and fully appointed interior, the Owl combines extreme performance with Spartan luxury in a shape as low-drag as the Strigiformes after which it is named.

So-called restomods aren’t usually a part of our conversation, despite the current vogue such modern adaptations are enjoying in the market. But it’s hard to ignore the allure of this XK120, the vision of builder Justin Hills, who believed that minor “improvements” would render the nearly 70-year-old design a contemporary classic.

The shape of the original fixed-head coupe is hard to fault, and lowered, shaved and brutally black, it cuts an imposing profile that turns the original sophisticated cat into a bit of a feral one. Owned by Barry Fitzgerald of Australia, who, evidently, drives it Down Under from the wrong side of the cabin.

The most exotic, high-performance chassis of its era was Maserati’s exclusive 5000GT, of which 34 examples were made, featuring bodies designed by nine different Italian coachbuilders! Only three wore bodies by Pietro Frua, one of which was ordered by Prince Karim Aga Kahn and shown at the Paris Motor Show in 1962.

The car has been restored in its original color, Savidin Penombra-Dusk, and is powered by the 5-liter V-8 engine developed by Maserati for its 450S racers. The 45-rpm Philips record player was a part of this luxurious GT’s original equipment. Owned by Stu Carpenter of Massachusetts.

Founded in 1926 but dormant from 1967 until the 21st century, Carrozzeria Touring of Milan is still building one-off and small-series creations for clients with an eye for beautiful and understated designs.

One of 15 Touring-bodied examples based of the latest Maserati GranTurismo Cabriolet.  Photo by Scott Williamson/Photodesign Studios.

The Sciasipersia Cabriolet, named for the Touring-bodied Maserati 5000GT built for the Shah of Persia in 1958, is based on the current Maserati GranTurismo Cabriolet, and features carbon-fiber panels with aluminum doors. Only A-pillars and door handles are carried over from the production car. A short run of 15 examples makes this exclusive Touring-bodied Maserati a rare jewel indeed.

Richard Bosley designed and built his dream car, now called the Bosley I, in 1953. His exotic fiberglass body was built around a tube frame and used a drivetrain based on the Pontiac 389 ci V-8 engine, a formidable power plant for the time. The remarkable secret is that Bosley was a horticulturist, with no training as an automotive engineer or designer. He put more than 100,000 miles on his singular creation, trading it in on an SR2 Corvette racer (the basis of his next car) in 1957.

This writer had the pleasure of meeting the designer at the Quail shortly before his passing. He was admiring a car I was showing at the time, and we went about our conversation until I realized, after exchanging business cards, that I was talking to Richard Bosley! He was an incredibly gracious man, and to my amazement, I received a handmade, 1:43-scale wooden model of the Mark I in the mail a few weeks later. It remains a cherished keepsake. The full-scale—and unique—Bosley I now resides, fully restored, in the Petersen Automotive Museum in Los Angeles.

Richard Bosley’s second and final foray into automotive design rendered the “Interstate,” an outlandish and forward-thinking creation intended for a then-evolving US highway system promising grand-touring at speed across the North American continent. The car was built on the Corvette chassis—the No. 6 Sebring competition Corvette—acquired when the designer sold his Bosley Mark I.

Work began in 1957 but was only completed in 1966. A Pontiac Tri-Power V-8 and other performance enhancements made it a thoroughly modern GT for its age. This singular example of Bosley’s vision was lovingly restored by Stephen and Kim Bruno, who acquired the car in 2015, recognizing the significance of this lone-wolf designer’s dream.

In the years preceding its extinction, Pontiac was a force with which to be reckoned, in the showroom and on the dragstrip. While working in the Advanced Design Group at Pontiac, Special Projects Lead Engineer Herb Adams developed the alloy-bodied “Project 77,” beginning with a scale model and building a rolling chassis in his garage.

Powered by his spare Pontiac 3870 ci V-8 engine and a Pontiac Tempest transaxle, it used Corvette suspension and Kelsey-Hayes 8-lug Grand Prix wheels. Drag racers Tommy Ivo, Don Garlits and Connie Kalitta advised on the body design. The Vivant debuted at the 1966 Detroit Autorama, but soon disappeared into a barn until later being restored by Jake Yenny. Owned by Phillip Sarofim, California.

In addition to great cars, the Quail is home to some important motorcycles, and few could be more famous than Rollie Free’s record-setting Vincent Black Lighting. His Bonneville Salt Flats 150-plus mph run is etched for eternity in a photo of the rider at speed, lying prone on the flat seat of the Vincent. That 1948 speed record was achieved after two 148 mph runs failed to break the 150 mph barrier, and Free stripped down to his bathing suit and tennis shoes, shedding weight and gaining speed.

The singular bike was formerly owned by Vincent historian and collector Herb Harris, under whose ownership this writer was privileged to fire up this Lightning and (fully clothed), twist the throttle and enjoy the raucous sound of a world-record breaker. Now owned by William E. “Chip” Connor II, Hong Kong.

With a hand-formed body by Luc De Lay of Marcel’s Custom Metal, “Illusion” by Rick Dore Kustoms debuted at the Grand National Roadster Show in Pomona, Calif., this year. The V-shaped styling cues of the original Lincoln Zephyr are catapulted into the 21st century with a low-slung Kustom, presented in brilliant orange metal flake.

Rolling into the Quail, the pristine show car nearly stopped traffic and was an outlier sandwiched between vintage Ferraris and any number of cars that—all of a sudden—seemed almost commonplace in the context of this one-off marvel. Owned by Rick Dore, Nevada.

The late racer, business mogul and carmaker Alejandro de Tomaso could well be spinning in his pine box if visions of the De Tomaso P72 have flashed into whichever domain of the afterworld he resides in at present. The last car to wear his surname was the 2004 Guara, a rare and tasteful effort that waned a year following its namesake’s demise.

The P72, designed by Jowyn Wong and referentially reverent to an aborted ‘60s-era effort between de Tomaso and Carroll Shelby, displays interesting retro-styling cues but punctuates an otherwise interesting design with abhorrent rose-gold details, chief among them wheel rims that scream “lease-to-own!”

Essentially absent from the North American market for nearly a decade, British carmaker Lotus made a stunning comeback with the company’s take on a Lotus “hypercar,” boasting almost 2,000 hp, 1,200-plus ft lbs of torque, and the requisite $2 million price tag that seems to go with any such flight of fancy.

As a halo exercise, it’s impressive, and appears serious in the context of other contenders for the ultimate-performance crown. But why, oh why, can’t this revered marque’s current custodians respect the fundamental mission of their frugal founder Colin Chapman, whose engineering and design philosophy gave the car world some of the most brilliant, beautiful and affordable sports cars ever made.