By Gregory Anderson on September 1, 2008 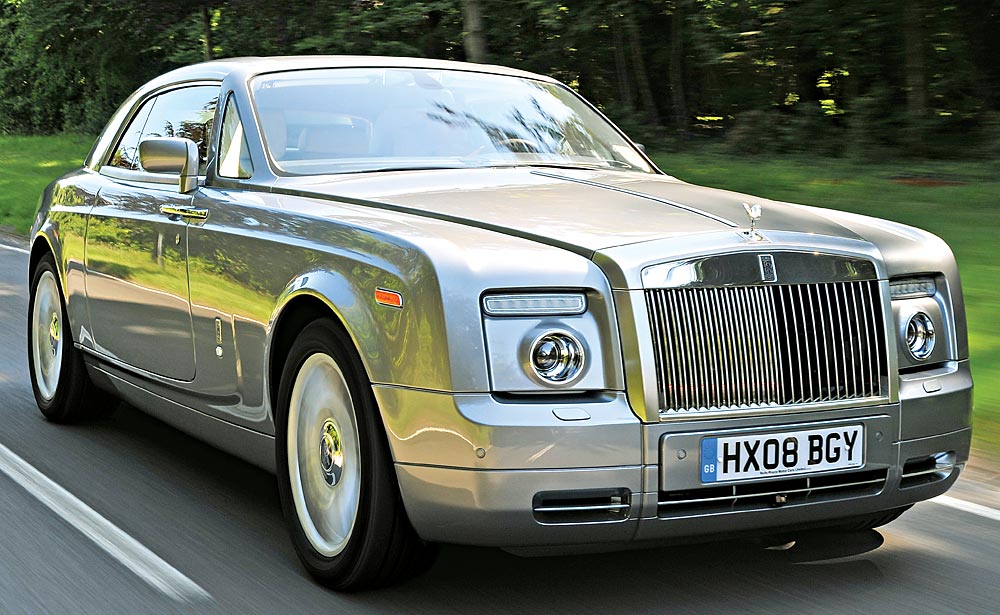 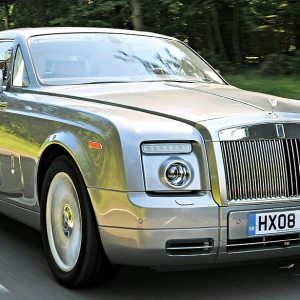 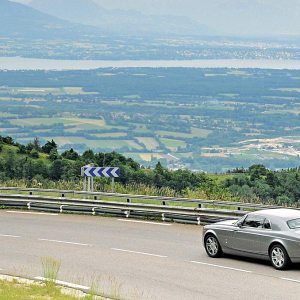 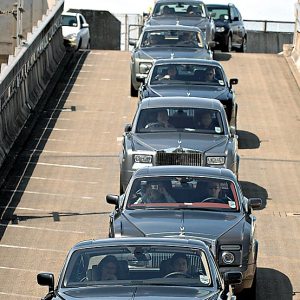 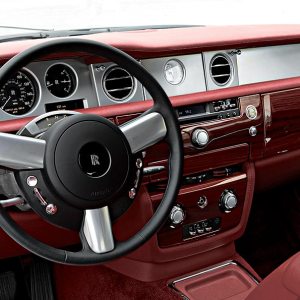 Early 100 years ago, Charles Rolls, the cofounder and bankroller of Rolls-Royce Motor Cars, became the first person to complete a nonstop, round-trip flight across the English Channel. Rolls took more than an hour and a half to accomplish the feat, but it is now possible to make a one-way, underwater voyage in about 20 minutes—assuming you do not become the focus of a random security check, as I did.

The heavily armed guards at the Chunnel’s checkpoint smiled as they approached the mammoth Rolls-Royce Phantom Coupé I was steering toward France. “It’s rare enough to see one Rolls-Royce prototype come through here,” one of the guards remarked, “so why am I seeing two?” He pointed out another shiny,

stainless-steel-hooded Coupé as it drove past, unmolested. I explained that he would be seeing about half a dozen more, all helmed by reporters taking the latest member of the Rolls-Royce Phantom family out for a first test-drive on the Continent. “Oh, that’s a tough job,” the guard remarked dryly, treating me to some stock British sarcasm as he waved us on. “I’m terribly sorry.”

Charles Rolls’ mechanically minded counterpart, Henry Royce, used to ferry the partners’ prototype cars to France and then drive them to his winter retreat in the Riviera. Our prescribed route led to the more staid but no less significant destination of Geneva, where the 101EX concept car—the foundation for the Phantom Coupé—made its debut at the 2006 Geneva International Motor Show.

Scheduled for release in the United States later this year, the $400,000 Coupé—the third model in the Phantom line—is the first car to debut on the watch of new Rolls-Royce CEO Tom Purves. Most recently CEO of BMW North America, Purves spent the first 19 years of his career with Rolls-Royce, and the Scotsman speaks about the brand as only an insider can. “When I joined Rolls-Royce in the ’60s, attention to detail was everything,” he recalled on the evening before our drive. “I must have spent three weeks at the beginning of my pprenticeship filing two pieces of metal together.” His mentors measured success, he explained, by running thin oil over the top of finished components, “and we weren’t allowed to go on to the next piece of our apprenticeship until such time as the oil did not fall out of the bottom.”

our apprenticeship behind the wheel of a Phantom Coupé began with a morning cruise down the left side of winding English country roads in the ultrawide, left-hand-drive cars. The first real opportunity to stretch the Coupé’s long legs came after we passed through the Channel Tunnel and onto France’s Autoroute. But despite my best efforts to double the posted speed limit, the TGV (train à grande vitesse, or “high-speed train”) I was trailing soon disappeared over the vine-blanketed hills of Champagne, and I gave up chase, allowing physics to slow the nearly three-ton car to a more rational cruising velocity. Of course, at 200 mph the TGV remained perfectly within its rights, while I apparently would face a 900-euro fine if the local gendarme stopped me anywhere along our two-day route, which covered nearly 600 miles from Calais to Geneva.

The reputation of a Rolls-Royce as a quiet vehicle comes into question somewhere above 110 mph. At that speed, the wind howls around the Phantom Coupé’s upright windshield, requiring passengers to raise their voices from whispers to higher-than-normal speaking decibels. “Where’s the ‘Oh shit’ handle?” my driving partner, writer Marty Bernstein, blurted out while vainly groping at the leather-wrapped A-pillar in search of a handgrip to steady himself.

While the Coupé’s cramped rear quarters are equipped with straps, providing one for the front passenger might have forced another bull to donate its hide. During a tour of the company’s production facility in Goodwood earlier that morning, we learned that 17 of the animals had already given their skins to line the Coupé’s interior. Matching scatter cushions are available as options, and Rolls-Royce will use whatever type of leather you desire, provided it meets quality requirements—and does not come from an animal that appears on an endangered-species list.

If it is possible to mass-produce a bespoke product, Rolls-Royce, under the tutelage of BMW, does so. In 2007 the company surpassed 1,000 sales, and “80 percent of those cars contain some element of the bespoke program,” noted Purves. The Phantom Coupé’s standard palette includes nine colors, but Rolls-Royce offers 44,000 different hues. “I don’t think we’ll ever use all the colors,” Purves said, “but they’re there.”

The interior of the Coupé can be appointed in almost as many shades, and accented by one of six different wood veneers or piano-black trim. But the Coupé’s most original option is what Rolls-Royce calls its starlight headliner: a ceiling decorated with 1,600 fiber-optic lights that can be dimmed or brightened to suit the mood of the car’s occupants. “This is all done by hand; one woman does all the detail work,” Purves said. “We’ve had a request to [arrange them to resemble] the actual northern sky.” No word on whether that particular customer plans to navigate using his ceiling and a sextant.

The Coupé is replete with such Rolls-Royce standards as rear-hinged suicide doors that close with the push of a button; dual carbon-fiber-stalk umbrellas that store in the doorjambs; nonspinning wheel-hub logos; and a winged-lady hood ornament that obediently rises and lowers at the push of a button. The best new push-button feature, however, went unmentioned at the press briefing, and I did not discover it until I had driven the car for a day and a half. Located inconspicuously along with several other chrome pieces on the steering wheel, the Coupé’s “S” button transforms the car into a sleek performance machine. Push it, and the steering response tightens, the shifts of the transmission become sportier, and the car’s gargantuan body shrinks down to the manageable size of a BMW 7 Series—or at least that is how it feels.

Physically, however, the basic form of the Phantom Coupé is essentially a Drophead Coupé with a hard top. Everything—from the chassis to the body panels—is made of aluminum. The grille is raked and slightly more aerodynamic than the Phantom sedan’s (the Coupé is roughly 9 inches shorter than the sedan), and a secondary line on the side panels gives the Coupé a slightly more aggressive presence on the road. “One detail that’s not insignificant to an engineer is the panel that goes over the front wing, then down, and all the way to the back,” Purves pointed out with a hint of pride in his voice. “That is all one piece—and it’s longer than a Mini.”

The Coupé has a bigger fuel tank than its Drophead sibling, as well as a trunk that is 25 percent larger; it can accommodate as many as four golf bags. The Coupé is also more driver-oriented. Coupes have always been cars for touring in the grand manner—for going long distances in comfort, silence, and silky smoothness. To provide a more dynamic feel than the Drophead does, the Phantom Coupé has thicker antiroll bars and a more tightly tuned suspension. The car’s steering consistency feels more like that of a Bimmer than a barge. “It’s got the stiffest body of any of the Phantom derivatives,” Purves said. “We used some of the tricks we developed for the Drophead Coupé to give the car additional torsional rigidity.”

Considering the prodigious power of the Coupé, one might assume that the 9-liter, V-16 motor from the 101EX had made its way into production. But the Coupé uses the same 6.75-liter, 12-cylinder, direct-injected engine found in the Phantom sedan and the Drophead Coupé. Producing 453 hp and 531 ft lbs of torque at a very civilized 3,500 rpm, the motor is tuned for low-rpm torque; in normal operating mode, it will not rev beyond a growl. The auto weighs roughly 5,800 pounds, or about twice as much as a Porsche Boxster. But with more than double the Boxster’s torque output, the Coupé is faster than the Porsche to 60 mph, which the Rolls reaches in an estimated 5.6 seconds.

Speed, however, is a relative concept. From my perspective as an American, it was slightly surreal to watch a passenger train pull swiftly away from me as I drove the Coupé at full throttle across the French countryside. I glanced down to see the dashboard’s two primary gauge needles sweep in opposite directions; the speedometer approached its outer reaches of 260 kph (7 mph faster than the Coupé’s supposedly governed top speed of 155 mph) as the power reserve indicator dropped steadily counterclockwise, eventually pausing to hover just above the zero percent mark.

As I was decelerating from this last top-speed trial before arriving in Geneva, a bird glanced off the front fender—an unfortunate incident, but one that illustrates the unnatural swiftness of this massive automobile. Though bothered by the accident, I took some solace knowing that the bird—assuming it peeked inside the Phantom Coupé before contact—spent its final moment peering into the heavens.

Jeanne Moreau’s Photographs and Wardrobe Up For Sale

Up Close: In Conversation with PipeCandy’s Vijay Sripada