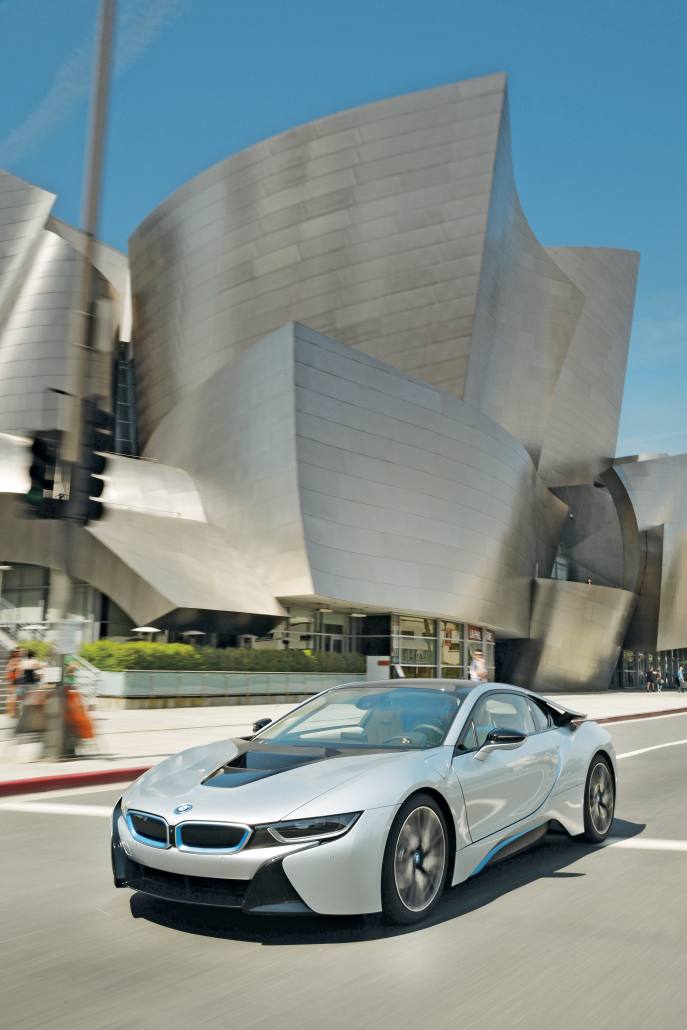 A Star Rises in Tinseltown the BMW i8 takes an industry—and an audience—in an exciting new direction.

A seven-figure supercar scarcely elicits a yawn from the jaded residents of Los Angeles, but many Angelenos twisted a neck bone when a phalanx of low-slung BMW i8s swarmed into their city this spring for BMW’s global launch of its flagship plug-in electric hybrid. A car that turns every preconceived, pragmatic-Prius-driving notion about the species on its head, the i8 breaks new ground in style and technology, and it gives a glimpse of the future of the luxury sports car.

The Porsche 918 Spyder, Ferrari LaFerrari, and McLaren P1 plug-in hybrids provide extreme performance, but these bleeding-edge supercars really amount to million-dollar footnotes, produced in numbers so small that all examples could be parked together in lots along Rodeo Drive. BMW intends the i8, which is scheduled to arrive in U.S. showrooms this summer with a starting price of about $136,000, to be an actual contender in the 2+2 sport GT segment. It is designed to demonstrate the performance potential of BMW’s i-brand technology. Equally important, the i8’s production showcases a manufacturing process that is sustainable and efficient and has a low environmental impact. BMW notes, for example, that it uses 100 percent renewable electricity to assemble the vehicles.

With its aerodynamic body, the i8 brilliantly references BMW’s M1, a design that remains fresh and exciting more than 35 years after its introduction in 1978. Both models share the classic mid-engine sports-car proportions: not so cab forward as to appear stunted, and with short front and rear overhangs that cut a sleek, aggressive look from every angle.

The i8’s 50/50 front-to-rear weight distribution is complemented by a low center of gravity—not quite 18 inches—which enhances handling, making the car feel well balanced, nimble, and small relative to its true size. At less than 51 inches tall, the i8 has a wind-cheating drag coefficient of just 0.26, which, along with its surprisingly light curb weight of 3,455 pounds, contributes to exceptional fuel efficiency.

Designed by BMW’s Benoit Jacob and his team, the i8 has doors that open upward like wings, a feature found only on the most exotic supercars. These doors, made of carbon fiber–reinforced plastic (CFRP) and aluminum, fly up and out and leave a cavernous opening to the CFRP Life-module passenger cell, half of the nucleus of the i8’s structural design. The module’s extreme torsional rigidity and strength translate to superior occupant safety and rock-solid road feel.

The i8’s overall shape is defined by a distinctive V, which BMW calls the Black Belt. It flows from the front end, over the roof, to the rear section, and complements the four available exterior metallic colors: gray, white, blue, and silver. Most fascinating to the eye are the floating roof pillars, which recall the fabulous Alfa Romeo B.A.T. cars of the 1950s. The pillars extend over the distinctive rear LED tail lamps, channeling airflow from front to rear.

Attached to the Life module is an aluminum subframe called the Drive module. The electric motor is mounted to the front section of the Drive module, and the gasoline engine to the rear section. A 7.1 kWh lithium-ion battery is situated low and longitudinally along the central tunnel of the passenger cell. The battery, which can be recharged from a standard 110-volt AC receptacle, will take the i8 about 22 miles on a single charge and will enable a top speed of 75 mph when the car is operating in the all-electric mode. The combined range from the motor and engine is about 310 miles, according to BMW. With ever-tightening emissions and fuel-efficiency standards, this symbiotic pairing of electricity and internal combustion will become the new normal for sports and luxury automobiles, not just for workaday commuter cars.

To maximize the performance/efficiency formula, the i8 uses a 1.5-liter, inline 3-cylinder gasoline engine that is turbocharged and tuned to develop 228 hp and 236 ft lbs of torque. This fast-spooling little engine, tucked in low behind the passengers, delivers power to the rear wheels by way of a 6-speed automatic transmission. Up front, the electric motor produces 131 hp and 184 ft lbs of torque, and drives the front wheels via a two-stage automatic transmission. The combined output feels much more substantial than 357 hp, in large part because of the instant torque inherent in the physics of the electric motor.

BMW engineers aimed for genuine sports-car performance and hit the mark: The i8 has a zero-to-60-mph time of about 4.2 seconds and a limited top speed of 155 mph. Some extreme sports cars may shave a second or more off that acceleration time, and many automobiles offer unlimited top speeds (useful for bragging rights only), but they cannot achieve fuel economy and emissions numbers in the econo-car league. The EPA fuel-economy figures have not been released yet, but in European testing, the i8 achieved 94 mpg.

The interior of the BMW i8 is comfortable and spacious, with contemporary forms and surfaces and lots of hand-stitched leather. It features electrically adjustable sport seats, a leather steering wheel with multifunction buttons, and an electronic dash display that changes graphics based on which of the three driving modes is selected. The navigation system conveys the best routes and resources for all-electric driving, and a freestanding 8.8-inch screen contains all the infotainment controls.

The i8’s three driving modes include the all-electric eDrive, which is optimal for short city jaunts, and Sport, which, with both the gas engine and electric motor operating simultaneously at times, maximizes turbo boost and emphasizes dynamic driving, acceleration, and even sound.

A drive from Santa Monica’s Viceroy hotel, through Beverly Hills, into Hollywood, onto the freeway, through the canyons, and back to the hotel along the Pacific Coast Highway allowed for experimentation with each driving mode.

Eerily silent when starting in eDrive, the i8 snaked down Santa Monica Boulevard and onto Wilshire, raising considerable interest along the way from pedestrians and motorists. On the freeway, the Comfort driving setting provided ample acceleration and response, but in this mode, the i8 telegraphed the expansion joints and road noise as one might expect from a GT equipped with low-profile tires. The i8 is engineered with a double-wishbone front suspension and a five-link rear axle, and the dynamic damper control adjusts suspension compliance depending on which mode is selected: Sport is stiffer and less compliant.

While navigating the sweeping curves of Malibu Canyon Road with Sport mode engaged, the i8 produced sonorous exhaust notes that boomed with every downshift. The 6-speed gearbox matched revs with the feisty turbo engine, which sounded more like a BMW V-8 than an inline 3. In tighter curves, the i8’s low center of gravity and the tenacious grip of the all-wheel drive allowed the car to be driven safely at high speed.

The i8 may not handle and perform as well as the Porsche 911, Ferrari 458, or Audi R8, but it does something those cars don’t: It represents the future.