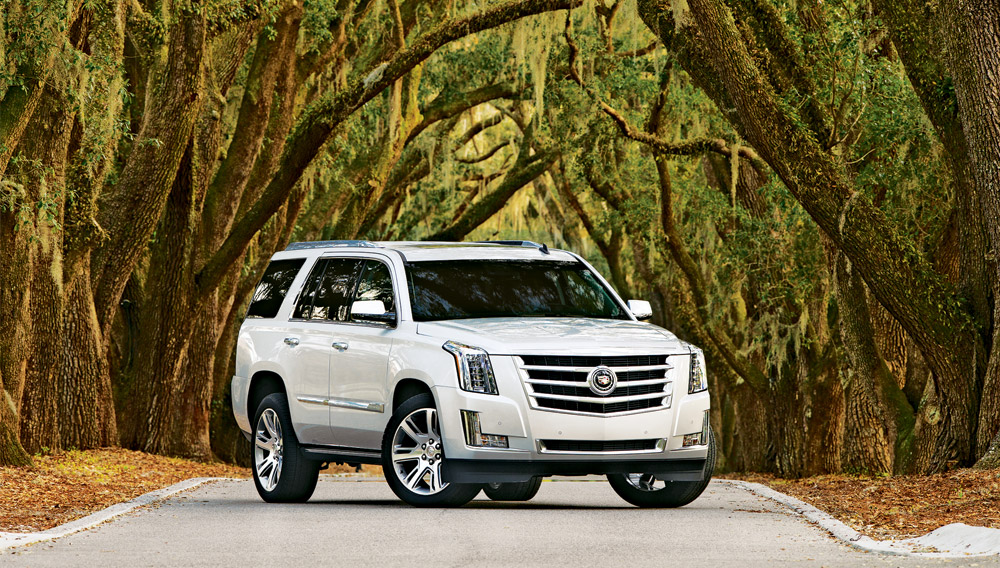 The Cadillac Escalade impresses with its new look, plush interior, and upgraded engine…

Cadillac redesigned and reengineered the Escalade for the 2015 model year, making it more powerful, more fuel efficient, and more refined than any previous version of the full-size luxury SUV. This fourth-generation model, which was introduced last fall and went on sale in April, arrived at the right time: just as consumers and car thieves seemed to concur that the Escalade was in need of a makeover.

Sales of the Escalade, which has been in production since 1999 and received its last major overhaul for the 2007 model year, fell to their lowest level ever in 2013, down to about a third of their 60,000-plus peak. And last year, for the first time since 2003, the Escalade was not the favorite target of car thieves, according to the Highway Loss Data Institute (HLDI), which compiles an annual list based on insurance claims for vehicles from the three previous model years. (The 2013 list, published last summer, was based on theft claims for model years 2010 through 2012.) In fact, the Escalade plummeted to number six on the list, below four pickups and the Chevrolet Avalanche, and thefts occurred at about half the rate that was reported three years earlier.

“General Motors has put a lot of effort into new antitheft technology, so that may help explain the decline in the Escalade’s theft rate,” HLDI vice president Matt Moore said in a statement included in the report. “On the other hand, sales of the Escalade have fallen in recent years, so there may be less of a market for stolen Escalades or Escalade parts.”

The HLDI report was great news for Escalade owners, but for Cadillac, it reinforced what the sales figures indicated: The vehicle that once defined its market category had lost its luster. In its latest form, however, the Escalade could reclaim its status as the premier full-size luxury SUV.

The new Escalade line ranges from the two-wheel-drive base model, which has a starting price of about $72,000, to the ESV Premium long-wheelbase model, which is priced from about $86,000. The latter is about 20 inches longer overall, with a 14-inch-longer wheelbase, and adds about 10 inches of legroom to the third row of seating.

The Escalade’s interior features real wood, real metal, microfiber suede, and hand-stitched leather. Heated and cooled seats, a heated steering wheel, and a Bose noise-canceling system are among the standard equipment. Double-stacked acoustic glass, thick firewall insulation, and triple-sealed doors work with the Bose system to eliminate nearly all noise from the road and engine.

The Escalade’s new engine is a 6.2-liter V-8 that generates 420 hp and 460 ft lbs of torque, which is 17 hp and 43 ft lbs more than its predecessor produced. It propels the 5,840-pound vehicle from zero to 60 mph in just under 6 seconds. Assisted by an active fuel-management system that allows the Escalade to run on four cylinders instead of eight when cruising on an open road, the new engine delivers an EPA-estimated 21 mpg on the highway. That is about 17 percent greater efficiency than previous models achieved.

The redesigned exterior’s distinguishing elements include a massive chrome grille and two thin stacks of LED taillights that look like red razors extending from the bumpers to the roof. The changes to the Escalade’s look are subtle, but they should appeal to buyers, while maybe escaping the notice of thieves.