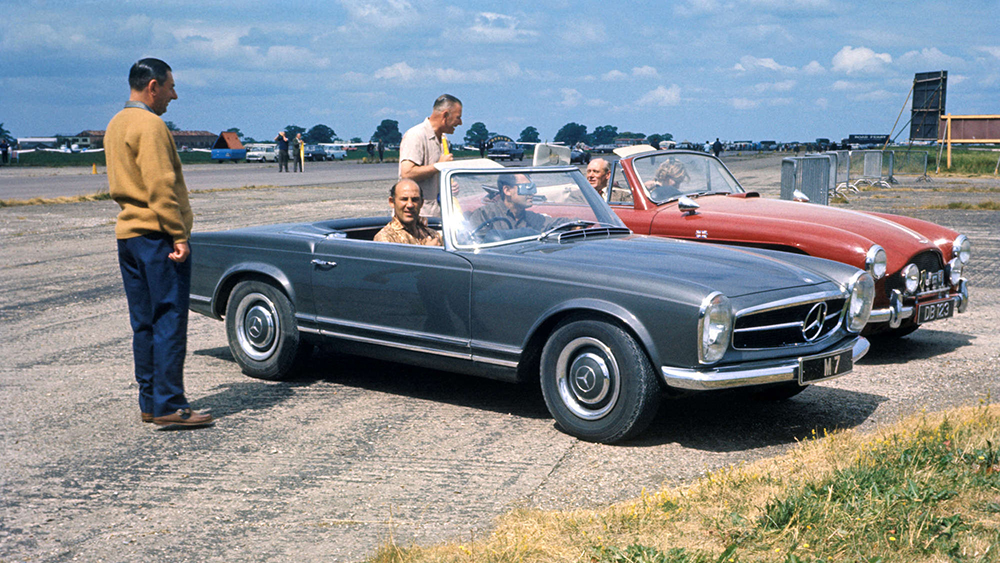 When legendary driver Stirling Moss died at age 90 in 2020, he left behind an indelible legacy, and, it turns out, one very cool Mercedes-Benz.

The 230 SL in question, which will go under the gavel later this summer at Silverstone Auctions, was built for Sir Stirling personally by the German marque in 1966 after he had established himself as one of the greatest ever racers to pilot a Mercedes.

The Brit started as a driver for the three-pointed star in 1955, joining what was then the world’s most successful racing team. Moss immediately won the Mille Miglia in a thunderous 300 SLR—his record time for the 1,000 miles still stands today—then achieved victory at the ‘55 British Grand Prix in a W196R. It was quite the debut.

By 1966, the golden boy of motorsport was looking for an equally formidable road car, and the Pagoda was at the top of his list. Although Moss originally wanted the more powerful 250 SL, it was not yet in full-swing production and so Mercedes opted to build a UK-spec 230 to his exacting standards, according to Silverstone.

Sir Stirling’s Pagoda, which was the display model at the 1966 Earls Court Motor Show, was fitted with the bigger 2.5-liter M129 engine from the 250. The car’s hard top was also equipped with a distinctive opening roof vent at the racer’s request. The marque even specially engineered the flap and hinges to mirror those found on the 300 SL Gullwing. The auction house says this was the only W113 ever fitted with such a vent.

The “Moss Pagoda,” as it’s affectionately known, was picked up from the factory by Sir Stirling himself and he then assigned his famous “M7” number plate to the car (seven was his lucky number). After clocking up more than 11,000 miles, Moss eventually sold his custom Pagoda in 1968.

In 1970, the two-door was repainted in Jaguar Pearl Gray (the color it still wears today), though that is apparently the only change that has been made. The auction house claims it is “as it was” when Sir Stirling owned it.