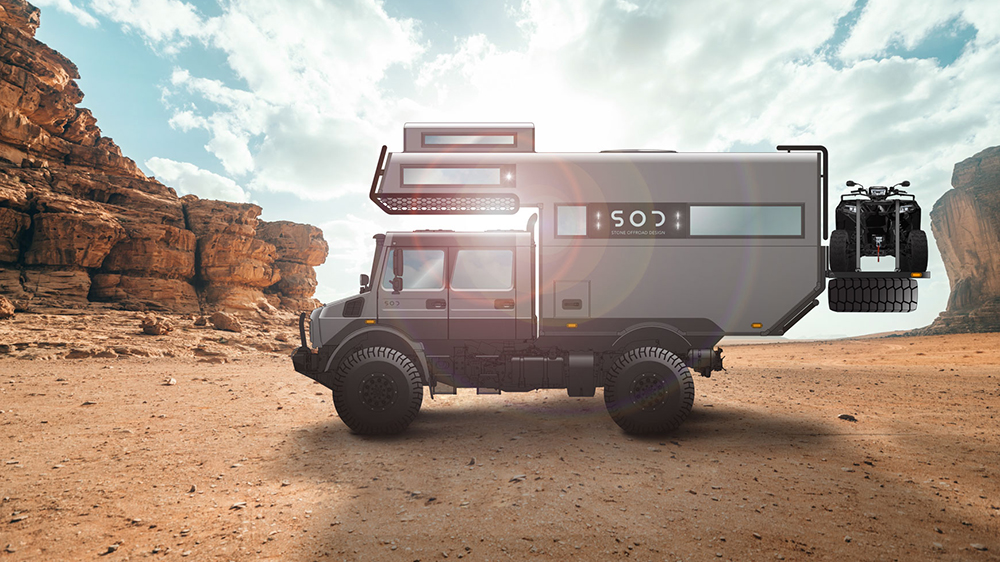 When it comes to picking out a camper, you usually have to decide whether to prioritize capability or comfort—that is, unless you’re eyeing Stone Offroad Design’s latest model.

The German shop—which goes by SOD for short—has just unveiled a heavily modified camper called the Rise 4×4. The company’s new creation is rugged enough to tackle nearly any terrain you can find, but also so well-appointed that you’ll forget you’re roughing it, no matter how far you’ve traveled from civilization.

The Rise 4×4 is built on the bones of a Mercedes-Benz Unimog U5032, an all-terrain vehicle that’s about as hearty as they come. It features a 4×4 system with locking front and rear differentials, a raised air intake system so you can drive through nearly four feet of water or mud and an integrated front winch. You have a choice between one of two powertrains—either a four-cylinder engine that can produce 231 horses or a six-cylinder diesel mill that pumps out 400 horses. It also comes equipped with a powerful LED lighting package, aluminum cargo box and a spare wheel holder that can also carry an ATV.

Since the Unimog building block didn’t need any major upgrades, SOD appears to have focused most of its time and energy on the interior of the van. Based on renderings accompanying the vehicle listing, the company has really outdone itself. We’ve seen some stylish luxury campers in the past, but never one that looked like the inside of a luxe Manhattan condo.

SOD has done an impressive job of maximizing space inside. The main bedroom, which has room for a full-size bed, is located in an alcove with a pop-up compartment that peeks out over the top of the Unimog’s four-door cab and is accessible via stairs. Below it is a kitchen with loads of counter space, a four-burner stove, sink and a tall combination refrigerator-freezer. In the back of the cabin is a lounge area with a wraparound sofa and dining table that can be converted into a second bedroom. There’s also a bathroom with a toilet, sink and shower. A sleek palette of neutral tones—think blacks, grays and whites— tie the space together. The space is well lit with ample windows throughout, a skylight and even a chandelier.

You’ll be able to work and play in the Rise 4×4 thanks to a wireless communication package and an app-controlled multimedia system that’s connected to a surround-sound audio system. The entire rig is powered by a 400-Ah lithium-ion battery pack connected to 840 watts of solar panels. There’s also a hot water heater, heated floors and an air conditioning system.

All of these features come at a steep price, of course. SOD is asking €899,900 (just over $1 million at current exchange) for the camper van. But if you want to off-road in comfort and style, there will be few options more plush that the Rise 4×4.

See more renderings of the camper below: