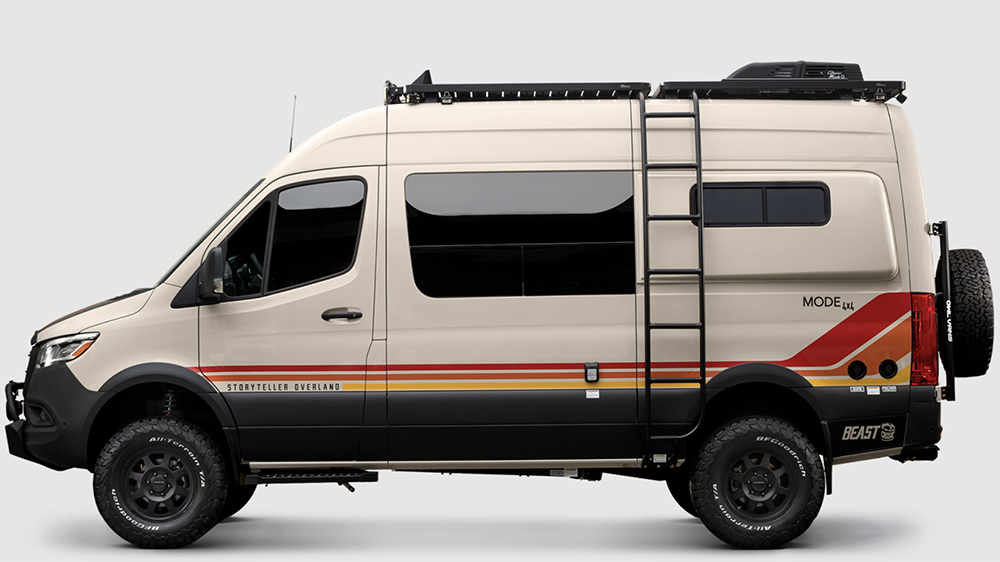 Storyteller Overland has already proven that it knows how to build a capable adventure van, but with its latest 4×4 the shop is taking things up a notch.

The Birmingham, Alabama-based outfit has just unveiled the most feature-packed member of its 2022 lineup—the Beast Mode 4×4. The stylish new four-wheeler is the company’s attempt to build the ultimate camper van, chock full everything you need to have fun and be comfortable the next time you take the adventure off-road.

Like the rest of Storyteller Overland’s vans, the Beast Mode is based on the passenger  configuration of the Mercedes-Benz Sprinter. It’s powered by a 3.0-liter turbodiesel V-6 mated to a seven-speed automatic transmission that sends power to all four wheels. Performance numbers aren’t listed, but the standard Sprinter’s mill can generate a solid 188 hp and 325 ft lbs of torque. That means it’ll be more than brawny enough for some serious 4×4 action, and can tow up to 5,000 pounds if you want to add a trailer. The vehicle’s suspension has been upgraded with Fox shocks, which increases its ground clearance by four inches. It also comes with an electronic traction system, which will allow for a smoother ride, even over the most treacherous of surfaces.

The Beast Mode also looks the part, with a design and exterior features that makes clear it’s here to conquer any terrain. The van comes in either Arctic White or Pebble Grey and both are accented with the brand’s trademark red, orange and yellow livery. It’s also equipped with a roof rack, tubular side-mount ladder and rides on a set of custom wheels wrapped in BF Goodrich K02 tires. There’s also a high-performance light package, including LED headlamps, so you can see where you’re going, even deep into the night.

The Beast Mode won’t always be in motion, though, and the brand has made sure to equip the van for your down time. Behind the swiveling front seats, you’ll find kitchen with an induction stovetop, fridge and microwave. Nearby, a GrooveLounge seating area can be used as workspace or converted into a bed with room for two people. There’s also a portable toilet and HALO shower. The interior has also been outfitted with loads of storage space and plenty of outlets and ports to keep you powered up. These, along with the AC and heating system, are powered by a 12-kW battery, which gets its juice from a series of roof-mounted solar panels. There are also screens and privacy curtains to keep bugs and prying eyes out at night.

If you’ve been searching for an adventure van that will let you cut loose during the day and relax in comfort at night, Storyteller Overland’s top-of-the-line van might fit the bill. The van is available to order though the brand’s website now and is priced at $198,746.