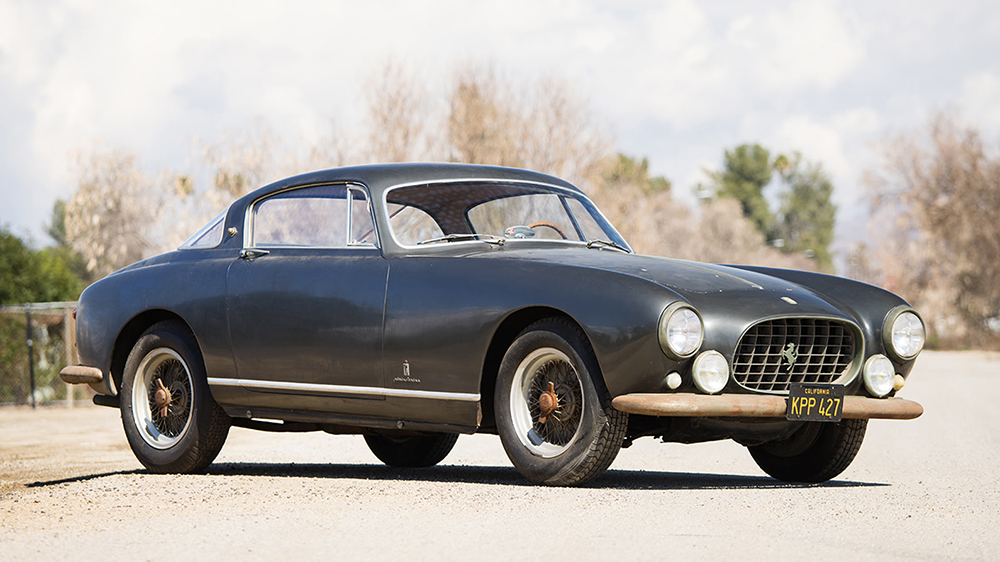 Every so often a time capsule of a car heads to auction and gives you an opportunity to own a piece of automotive history. Now, one such relic—a 1955 Ferrari 250 Europa GT—is here to make discerning collectors swoon.

The prized Prancing Horse, which will go under the gavel at Gooding & Co’s Geared Online sale this May, has quite the backstory: It was recently discovered in California after decades in storage. According to Ferrari historian Marcel Massini, the retro ride was reportedly built in October of 1955 for one of the marque’s most high-profile clients, Dr. Enrico Wax of Genoa, who was the Italian distributor for Johnnie Walker whiskey and Moët & Chandon Champagne at the time.

Wax opted for an array of custom touches that distinguish this particular Europa GT from the 43 others in existence. Chassis 0413 GT features a distinctive colorway of black over orange leather that highlights the remarkable Pinin Farina coachwork. It also features a special instrument arrangement and an unconventional taillight treatment.

Under the hood, meanwhile, the two-door coupe packs a 3.0-liter Colombo-derived V-12 engine that’s good for around 217 horses. This gives the car an estimated zero to 60 mph time of 6.8 seconds and a top speed of 143 mph.

After its stint in Italy, the Ferrari was shipped Stateside in the late ’50s or early ’60s. Under the ownership of a Southern Californian collector, the car was retired from the road in the mid-’60s and has spent the rest of its life virtually untouched. In fact, it has just over 20,000 miles on the ticker.

It’s been lovingly preserved, too, and still sports an array of charming vintage features, including a 1959 Automobile Club d’Italia sticker and original Pirelli hoses in the engine bay.

“Not only is this Europa GT one of the finest surviving 1950’s Ferraris, it has been secreted away for decades in a private Southern California collection and has never before been exhibited or offered for public sale,” David Brynan, Gooding & Co’s senior specialist, said in a statement. “This is a truly extraordinary Ferrari—the kind of discovery that will excite any collector with a passion for original, unrestored automobiles.”

The 250 Europa is regarded as the first of Ferrari’s iconic GT models. The landmark four-wheeler essentially paved the way for further front-engine V-12 grand tourers to follow. As such, you’ll need to get in fast to nab this window to the past.