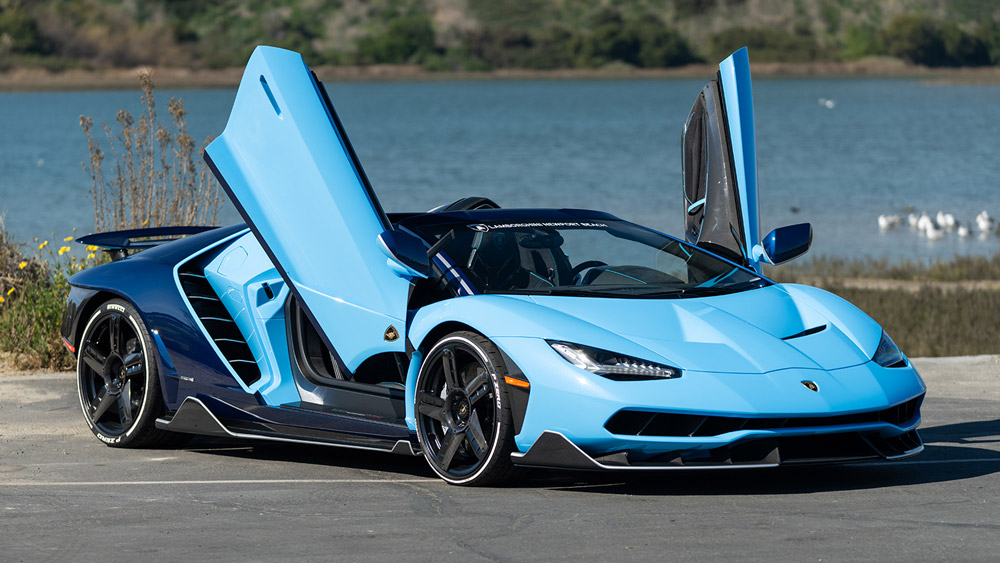 One could argue there are three categories of collectible cars. The first would be examples from bygone eras, when electronics meant a Delco radio. The second would be vehicles from the dawn of the technological age, when turbos and adjustable suspensions first hit the road. And the last would be automobiles from today, prime examples of technological wizardry that are sure to be the coveted giants of tomorrow.

Gooding & Company is about to make a handful of cars from this last category available to bidders on March 6 at its Amelia Island auction. And what a collection it is. It isn’t just that the marques represent a familiar and formidable list—Lamborghini, McLaren, Ferrari, Porsche, Ford and RUF—but that the models themselves are truly unique creations from each of those manufacturers.

No kidding. Let’s take the 2017 Lamborghini Centenario Roadster, whose name was chosen to celebrate the centenary of the birth of company founder Ferruccio Lamborghini. One of only 20 made and now estimated at $2 million to $2.5 million, the Centenario features a tuned version of the Aventador’s ferocious 6.5-liter V-12 and is capable of hitting 220 mph.

This 2017 Lamborghini Centenario Roadster is estimated to fetch as much as $2.5 million.  Photo by Mike Maez, courtesy of Gooding & Company.

The model also had a company-first rear-wheel steering system to sharpen turn in, and a twin-plane front splitter to help keep the nose glued to the pavement. With only 665 miles, the car also features a paint job—a two-tone Blue Cepheus and Blue Hera livery—sure to be as pristine as the rest of the Lambo.

Another eye-catching offering is a McLaren Senna (estimate: $1 million to $1.2 million). This rare 500-run, track-focused beast, which sold out before production even started, not only produces 1,763 pounds of aerodynamic downforce, but it also was laden with 23 extra-cost options, including McLaren’s Visual Carbon Fiber gloss body treatment that simply screams high-tech masterpiece. Not surprisingly, the previous owner decided to marvel at this car rather than race it, given its 88 original miles.

Of the three RUF’s in Gooding’s mix, the most exotic, arguably, is the 2009 RUF CTR3 ($800,000 to $1 million). RUF was founded by Alois Ruf, who for decades now has been taking already menacing Porsches and, with full German TUV approval, manufacturing new vehicles that meet his own exacting specifications. In this case, Ruf developed a chassis based on Porsche’s 997 Turbo and 987 Cayman and went to town from there.

Chassis No. 006 (of 30 made) is offered in iconic Porsche Guards Red with striking gun-metal grey wheels, and is packed with a modified 3.7-liter, twin-turbo six-cylinder engine that makes 754 hp. If anyone confuses you for a mere Cayman owner, that notion will be dispelled the instant the throttle is engaged.

Also of note is the 2017 Ford GT in the lineup, an especially apt auction choice in the wake of the recent popular and critical success of the film Ford v Ferrari, which retells the dramatic story of Ford’s eventual dominance over its Italian rival at the 1966 24 Hours of Le Mans.

The 2017 Ford GT being offered has only 15 miles on it.  Photo by Ben Bertucci, courtesy of Gooding & Company.

This modern-day salute to the legendary Ford GT40 has a 3.5-liter twin-turbo V-6 engine that delivers 647 hp and 550 ft lbs of torque. Factor in slippery aerodynamics and carbon-fiber seats and the Ford GT will vault its new owner to 60 mph in less than 3 seconds. Not that this particular example—wearing Ingot Silver paint over a Dark Energy interior—has likely taken anyone on such a thrill ride yet: it only has 15 miles on the clock. Time to summon your inner Ken Miles.