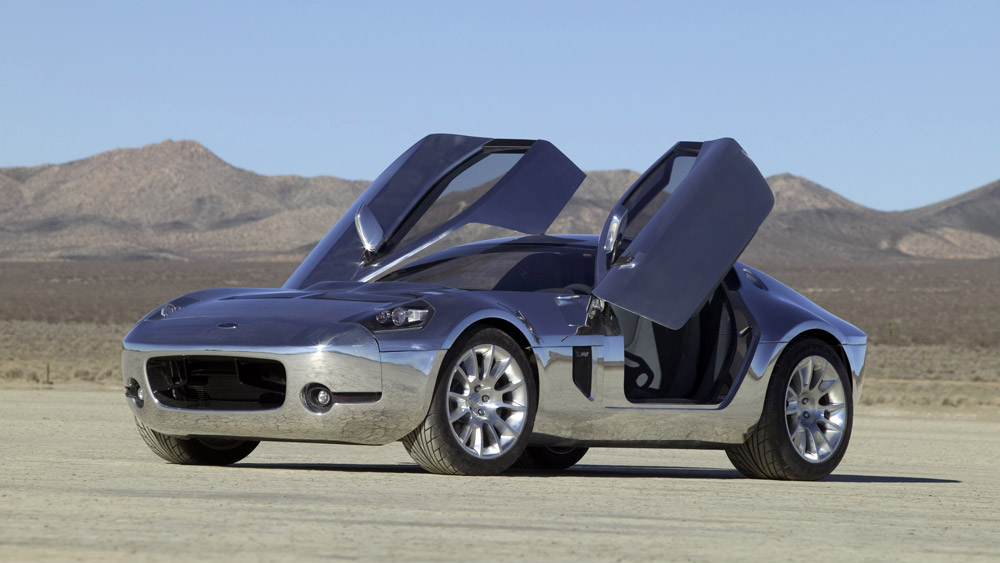 When the master fabricators at Superformance announced that they’d inked a deal with Ford and Shelby America to actually produce the stunning Shelby GR-1, enthusiasts the world over rejoiced. The GR-1, a shimmering homage to the iconic Shelby Daytona, was unveiled to the world in the form of a working prototype by Ford at the North American International Auto Show in 2005.

Beneath the elongated bonnet of Ford’s creation is a 6.4-liter, all-aluminum V-10, constraining some 605 horses. Thus, when Lance Stander, CEO of Superformance, announced the forthcoming build, rampant speculation began as to which V-10 would be powering his team’s beast. Today, we can confirm the answer: none.

“The plan is a supercharged V-8,” Stander told Robb Report. “It sadly won’t be a V-10. Ford doesn’t have a V-10 apart from one they utilize in trucks, and we want the GR-1 to be a production car with a production engine—all coming from Ford.” A supercharged Ford V-8? Sounds suspiciously like the engine from the new Mustang Shelby GT500. “You’re thinking on the right track,” Stander laughed. While Ford’s been tight-lipped about the actual power specs from that mill, everyone can agree that the horsepower will be well north of 700, so that’s a bright spot.

The car will carry a supercharged V-8.  Photo: Courtesy of Superformance.

But that whopper of a powerplant’s been mated to the Tremac dual-clutch transmission found in the GT500. “[The Tremac] is a very exciting transmission, and we are in talks with them,” says Stander. “But at this point we are also planning a six-speed manual.”

There’s also been talk of an electric drivetrain, and Stander admits they’re “looking into an all-electric version, that’s definitely on the table with Shelby American.” However, Stander notes he’s a fan of combustion engines and believes his rabid client base is as well. In addition to a fully battery-powered system, a hybrid option is being considered. Explains Stander: “We simply can’t ignore the market’s move towards electric, and where it will be when this car comes out in two years’ time.”

The reason for the delay? At the moment, it’s the government shutdown. Superformance wants to make and sell its Ford Shelby GR-1 under the Low Car Volume Manufacturers Act, which allows the production of up to 325 models. All the paperwork from the various government agencies has cleared, save a stamp of approval from NHTSA (National Highway Traffic Safety Administration). The paperwork is waiting on an NHTSA desk, and while “we expected a delay, we didn’t think it would be this long,” notes Stander. “We thought it would come through in early January of 2019, but with the government shutdown, who knows how much longer it will take.” The minute the agency approves, the build can begin.

The GR-1’s power-train configuration will most likely generate north of 700 hp.  Photo: Courtesy of Superformance.

While they can produce up to 325 units, don’t expect that volume to roll out straightaway. “We’re going to launch with 100 to 200 special editions, all aluminum bodied, and you can have that polished or painted,” mentions Stander. But demand may see the overall volume made skyrocket. “The reaction to the GR-1 has been the largest we have ever had for a vehicle. For our GT40, we took 150 orders back in 2005 and 2006. We still haven’t opened the order book for the GR-1 and interest has far surpassed the GT40. It’s incredible and very overwhelming. Not a bad problem to have, though; too many people wanting your car,” Stander muses.

Ford has shipped Stander and Superformance the original 2005 Shelby GR-1, so engineers and designers may pore over the beauty for inspiration. According to Stander, his time behind the wheel of the prototype has been limited. “I’ve sat in it, but haven’t driven it yet. I’ll definitely take it out for a quick drive before we have to send it back.”