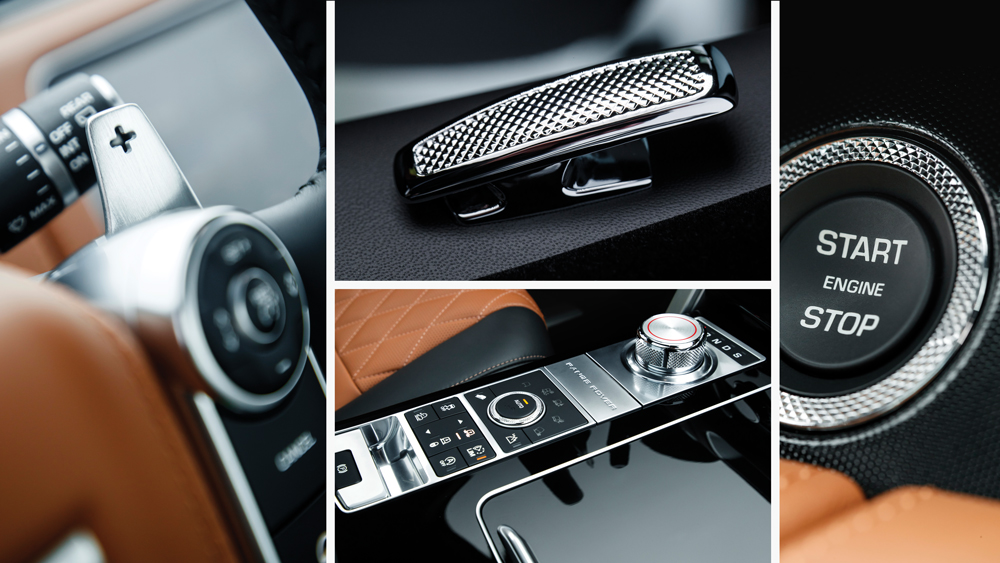 Fog poured in from every side, filling the Range Rover–shaped hole I had punched in the dense English air. The adaptive xenon headlights pierced through the veil, blueprinting a narrow road ahead. Drivers heading in the opposite direction no doubt heard the bellow of a 5-liter supercharged V-8 long before they saw its crimson sheath, and those in lesser automobiles instinctively cowered to the farthest edges of their lane. The Range Rover SVAutobiography Dynamic is the pinnacle of Land Rover engineering. Special Vehicle Operations (SVO), Jaguar Land Rover’s in-house tuning division, has introduced new levels of performance—and comfort—to one of the most iconic SUVs ever built, yet its $170,995 starting figure is still tens of thousands less than its segment competitors.

The Dynamic is the fastest full-size Range Rover ever made. Under its bonnet resides a power train that channels 550 hp and 502 ft lbs of torque to all four wheels via a ZF 8-speed automatic transmission. With an admonishing snarl, the SUV surges from zero to 60 mph in a scant 5.1 seconds and on to a top speed of up to 140 mph. To
complement the Dynamic’s tenacious engine, SVO has lowered the vehicle’s center of gravity, upgraded several suspension components, quickened the steering response, and added a set of Brembo brakes.

Before driving the Dynamic, I was given a tour of the £20 million, 215,000-square-foot SVO facility in Coventry, England. Among the specialty shop’s most extraordinary features are an advanced paint center capable of 10,000 color combinations and a personalization studio where customers spend an average of $25,000 designing every element of their dream Land Rover.

“Special Vehicle Operations was created to enhance the existing DNA of Land Rover vehicles,” said SVO director Mark Stanton. “We take the volume 10 of JLR [Jaguar Land Rover] products and dial it up to 11 or 12.” Though it was established only 3 years ago, SVO has already produced a high-velocity Jaguar F-Type and Range Rover Sport, a long-wheelbase Range Rover, and numerous bespoke Land Rover models.

Performance-oriented models inherit the SVR badge after undergoing a series of suspension, engine, braking, and stylistic modifications. Luxury commissions don the SVAutobiography moniker following improvements to cabin materials, ride quality, and rear-passenger accommodations. A third insignia, SVX, is presently in development for off-road-honed models. These articulations are not all-encompassing, however. The SVAutobiography Dynamic, which is available in only standard-wheelbase length, occupies territory somewhere between performance and luxury extremes. Stanton refers to the vehicle as a “gentleman’s express,” graced with an SVAutobiography’s premium touch and an SVR’s charisma.

With the usually stunning Cotswold countryside cloaked in doleful gray, I found little to distract me from exploring the Dynamic’s performance threshold. The sophisticated adaptive damping system restrained body roll through tight and sweeping corners alike. The fine-tuned suspension seemed to transform mangled pavement into fresh tarmac, and the electronically assisted steering rack traded overcommunication for immediate response. Power erupted with every brush of the throttle, while the tremendous brakes shaved momentum before I reached each speed camera and quaint village.

Pausing to indulge in a bit of local fare—the pub at the Swan Inn in Swinbrook serves the best pheasant in England—I took stock of the Dynamic’s aesthetic elements. The side vents, hood finisher, grille, front bumper accents, “Range Rover” script, and tailgate trim were each shaded in a rich graphite tone. The finish on the optional 22-inch alloy wheels brilliantly contrasted the red brake calipers.

Front passengers in the tidy, elegant cabin are treated to 22-way adjustable, diamond-quilted leather seats with red contrast stitching that echoes the exterior accents. A perforated ebony leather headliner harmonizes with the black veneer dashboard and door panels. The knurled finish on the rotary shift controller, ignition button, and pedals offers tactile delight, and the anodized red paddle shifters immediately catch your eye when you settle into the cockpit.

“The 4×4 was never intended as a status symbol, but later incarnations of my design seem to be intended for that purpose. I find the people who use it as such deeply unattractive. Sadly, the 4×4 has become an acceptable alternative to Mercedes or BMW for the pompous, self-important driver. To use them for the school run, or even in cities or towns at all, is completely stupid.” —Range Rover designer charles spencer “Spen” King in a 2004 interview  Photo: Courtesy

Looks, power, and luxury are a sufficient collection of qualities for any premium model, but the Dynamic claims one more: capability. Even England’s dew-soaked marshes couldn’t contend with the SUV’s Low Traction Launch System, which mitigates wheel spin through torque management. Meanwhile, the All-Terrain Info Center monitors vehicle geometry as you flex the Range Rover’s off-road muscle.

Not long ago, the Range Rover was unchallenged as a full-size luxury SUV. Even as the premium sedan and coupe markets teemed, few automakers contended with Land Rover’s foothold. However, changing consumer tastes have introduced elite luxury brands to the SUV space. Bentley’s Bentayga and upcoming models from Rolls-Royce and Mercedes-Maybach flaunt premium pedigrees, but none of those brands can claim nearly five decades of segment expertise.