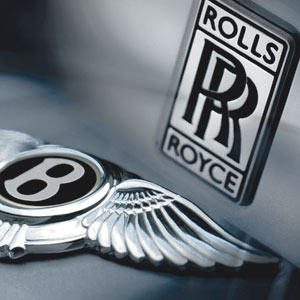 The late Sir Frederick Royston, a pioneer in the business of importing British cars to the United States, was normally the most affable of gents. But there was one thing that would send him around the bend. Every so often, while Royston was tooling around Philadelphia in his Bentley, some wiseacre would pull up next to him and demand, “Hey, you got any Grey Poupon?”

It was not the presumptuousness of the request that irked Sir Freddy as much as the inaccuracy. “That’s not a Bentley in the commercial. It’s a Rolls-Royce,” he would fume. “Don’t people know the difference?” Alas, most Americans did not. But those who did know understood that the difference was profound.

It hardly mattered that by the 1970s about the only thing distinguishing a Rolls from a Bentley was the flying lady on the former and the winged B on the latter. This minor detail, says Reg Abbiss, a Rolls spokesman throughout the 1980s, bespoke the vast disparities between the owners of each marque. “I was often asked why we had two marques when they were really the same car. I explained it was because we had two kinds of buyers.”One drove a Bentley, while the other was chauffeured in a Rolls-Royce.

This was less a matter of dimension than tradition. Bentley had won five Le Mans titles from 1924 through 1930, and salesmen of that era were often racecar drivers. In contrast, as late as 1972, the Rolls-Royce owner’s manual began its description of how to change a tire thus: “Instruct your man . . . ”

Bentley loyalists were understandably dismayed when, in 1931, the British courts awarded the then-bankrupt company to Rolls-Royce Motor Cars instead of the more simpatico Napier company, which already had plans for the first Napier Bentley on the drawing board. The gulf between the two camps widened when Bentley’s race team drivers, the famed Bentley Boys, tried to retrieve their trophies, only to learn that the new owners—who had no interest in racing—had sold them “for old silver.”

The Bentley faithful suffered further indignation in 1955, when the Bentley R type was replaced by the S type, which was little more than a dressed-down Rolls-Royce Silver Cloud, with less expensive wood trim and standard carpeting instead of lamb’s wool. By 1980, Bentleys accounted for only 4 percent of the company’s total production. This, however, was about to change.

Though it was impossible, given the company’s limited resources, to make the world’s finest car finer, for a reasonable amount of money it could make the world’s next-finest car faster. Thus, in 1982, the Bentley Mulsanne Turbo was born. For the first time in decades, buyers could draw a clear distinction between a Rolls-Royce and a Bentley, and they demonstrated a clear preference for the latter. This trend continued into the late 1990s, when Bentley was outselling Rolls three to one. If, for Bentley fans, this was vindication, it was moot.

In 1998, Britons who had never aspired to either marque wept at the news that, after years of red ink, England’s proudest automotive names were about to be separated and sold to the Germans. What would happen to tradition? One might as well dress the Beefeaters in lederhosen and start toasting the queen with “Prost!” instead of “Cheers!”

It would have been inconceivable, if not heresy, to imagine that with Rolls-Royce owned by BMW and Bentley the property of Volkswagen, tradition would emerge stronger than ever. However, the benefits of new ownership are evident in Rolls-Royce’s first Phantom in more than a decade. Though 17 inches longer than the Seraph, the last wholly British-built Rolls, it is two and a half times as rigid. As for Bentley, in 2003, its first year of German ownership, the marque won Le Mans for the first time since 1930. And its high-performance tourer, the Continental GT, is Robb Report’s 2004 Car of the Year. Need we say more?

While holding on to their memories of Bentleys and Rolls-Royces past, British motoring buffs can now look forward to the glory years to come, while the two marques’ owners reflect on their commonalities rather than niggling discrepancies in taste. Perhaps in the near future, at a stoplight somewhere, a Rolls-Royce owner may even command his driver to lower the window and offer the Bentley driver next to him a dollop of his Grey Poupon.