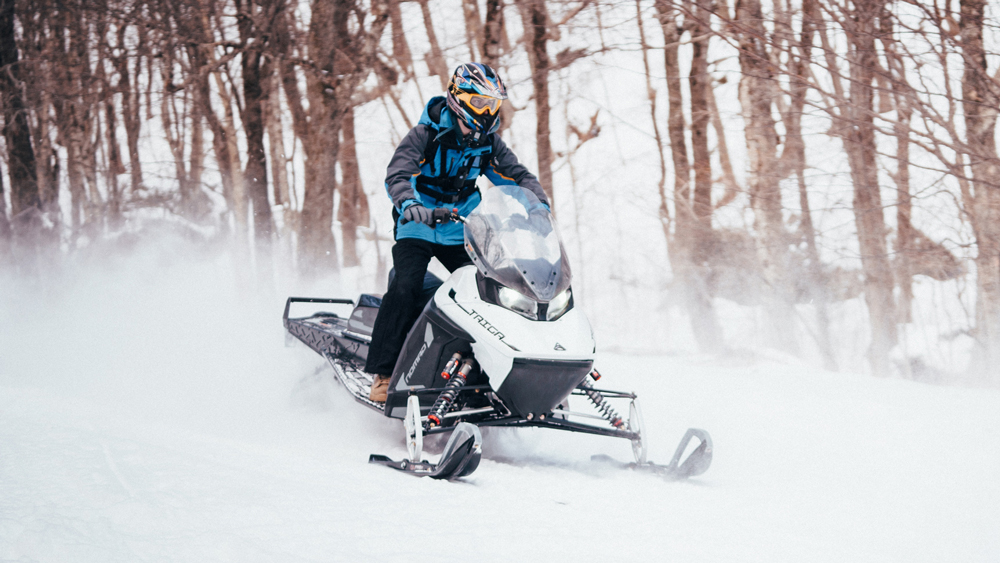 In the dead of winter, a place like Stowe, Vt., is traditionally hell for electric vehicles. Frigid temperatures dramatically slow down a battery’s internal chemical reaction necessary for performance, and, as a result, both power and range take a beating. Yet here I am, blasting down a Green Mountain State trail in February, full send, on a Taiga—the world’s first all-electric production snowmobile.

Named after the moniker for subarctic conifer forests, the Taiga offers plenty of output and little range anxiety. Has Taiga made some breakthrough in battery technology to make this possible? Is it cold fusion? Black magic? Nope. It’s all just owed to a few sled-enthusiasts with a novel engineering solution.

Much like they are in every other vehicle segment, EVs are advancing into the world of power sports in a big way, and establishing a genre-busting reputation. Generally, EV performance is comparable to that of counterparts relying on the internal-combustion engine (ICE), but while charge times are plummeting and charge-point locations are increasing, EVs still face an uphill climb when it comes to accessibility and practicality outside of urban settings. All of that makes snowmobiles the last thing you want to have powered solely by battery, right? An all-electric snowmobile should, for all intents and purposes, fail miserably. Fortunately, Samuel Bruneau, founder and CEO of Canada-based Taiga Motors, saw things a little differently.

“With where battery technology is now, it’s a great time for power sports,” says Bruneau, as we stand in an open and snow-covered clearing. “The weight is down, the charge times are down and the power is up. Performance-wise, we’re close to our ICE counterparts.” Well, yes and no.

The nearly 700-pound Nomad has 90 hp and 125 ft lbs of torque.  Photo by Vinci Visuals, courtesy of Taiga Motors.

Pricing on the Taiga Nomad, the model I’m testing, starts at $17,490, which is quite high for a sled with only 90 hp and a 62-mile range. For a Ski-Doo or Arctic Cat near that price, you can expect to get at least 50 percent more power, more than double the range and a lighter vehicle.

With EVs, however, the cost is mostly up front, with very little additional investment required on maintenance due to the fact there’s less to break with so few moving parts. The mindset marked by the old adage that “only mechanics can own snowmobiles” is, according to Bruneau, “coming to an end.” With the cost of maintenance significantly lower, and improved reliability, snowmobiles are starting to entice a larger audience.

Thanks to the battery layout, the 50/50 weight distribution on the Taiga Nomad translates to balance and predictability.  Photo by Vinci Visuals, courtesy of Taiga Motors.

Performance can still be a sticking point, especially in the power-sports circles. But you have to alter your perception. The Nomad may only have 90 hp (the two sportier Taiga models each have 120 hp), but it also has 125 ft lbs of torque that’s instantly available. This keeps the nearly 700-pound Nomad fairly rapid over loose snow, and helps it tow up to 1,125 pounds.

But how does the Taiga hold on to its battery’s performance despite the cold weather? Engine-block heaters or, in this case, battery-pack heaters are the answer. It adds some weight but regulates the battery temperature to ensure it doesn’t drop below optimum. And to keep the battery from getting too hot from extended use, the solution is even simpler—though not as obvious as you’d think.

Taiga’s Nomad has a 62-mile range after a full charge.  Photo by Vinci Visuals, courtesy of Taiga Motors.

The battery pack lies flat, running the length of the sled and covered mostly from above by the cockpit, bodywork and riders. This leaves few ways to simply air-cool the battery. Taiga’s fix is to utilize the snow that flies off the tread as a natural coolant as it hits the deliberately exposed rear section of the battery. It’s simple, efficient and effective.

The battery architecture of the Taiga models also gives them signature handling characteristics out on the trail. With the battery’s weight evenly spread front to rear, there’s a perfect 50/50 weight distribution. On the trail, that translates to balance and predictability.

Given we were seemingly out in the middle of nowhere, I couldn’t ignore the idea of running out of battery power and getting stranded. Bruneau said the company is already leading an initiative to change that. Taiga is on its way to building hundreds of charge points all over North America, focusing on the remote places its customers might need them. And that includes mountains where ski resorts like Bolton Valley just signed up to buy a fleet for the ski patrol and mountain operations.

With 120 hp, the Taiga Ekko is also a zero-emissions sled.  Photo by Vinci Visuals, courtesy of Taiga Motors.

Not only is the lack of noise pollution (and regular pollution), lower maintenance costs and usability attractive to big ski resorts, Bruneau says the performance and battery characteristics suit ski patrol duties perfectly. “Like most riders, ski patrol goes out on short trips up and down the mountain with a few trails in between, but a ride rarely exceeds 62 miles, or even 30 minutes. They go out, come back in, plug in, charge and never worry about range.”

One number that’s crucial is charge time. For EVs, that number is tumbling by the day. And with a level-three charger, you can get your Taiga from zero to 80 percent capacity in just 30 minutes. According to Bruneau, between the range and the battery charge time, that equates to a decent trail ride, a stop for lunch, another charge and then a second trail session before the average rider is done for the day.

Plugged into a level-three charger, the Taiga Nomad can go from zero to 80 percent capacity in just 30 minutes.  Photo by Vinci Visuals, courtesy of Taiga Motors.

At this point in time, both EVs and traditionally powered machines are coexisting, and Taiga doesn’t expect to replace gas-burning snowmobiles—they don’t want to. Similar to selecting a car from Tesla or a bike from Zero Motorcycles, owning a Taiga offers a different experience. It’s not necessarily better or worse, but it does present an alternative that’s more conducive to protecting the outdoors and leaving less of a footprint. And ultimately, that’s more important than the horsepower count—although a few more would be nice.