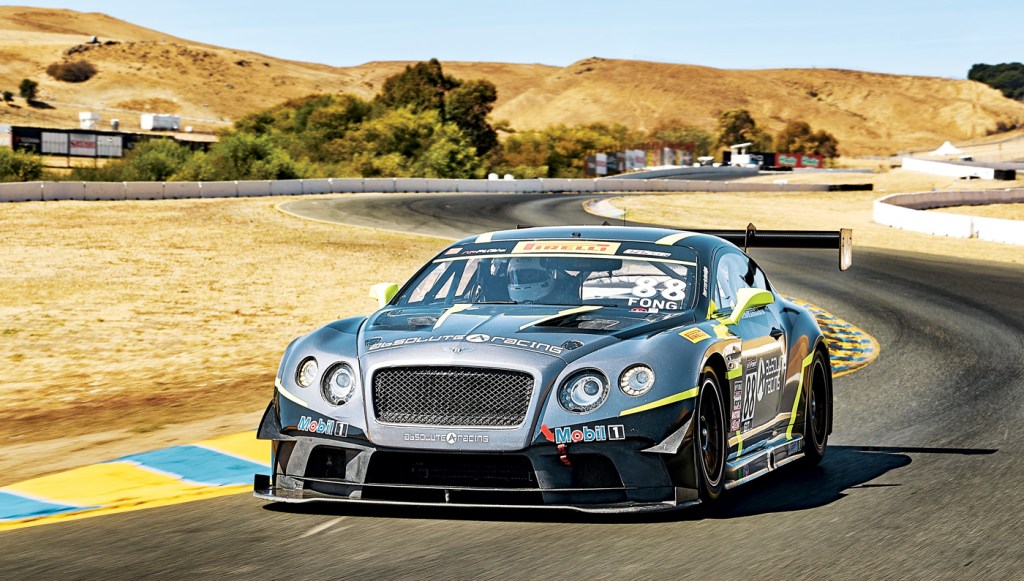 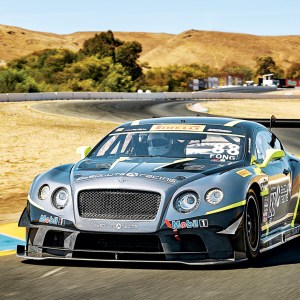 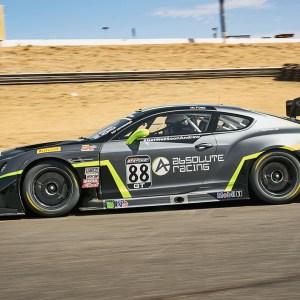 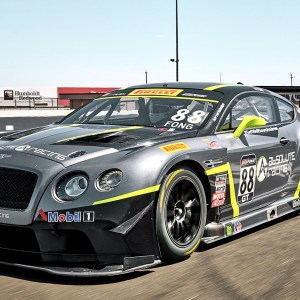 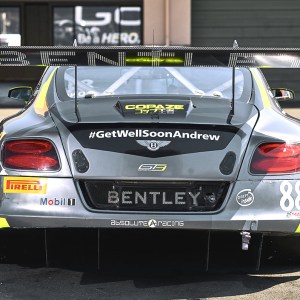 The author takes the brand’s racecar for a spin and finds that less luxury can be more fun.

Bentley describes the Continental GT3-R as “probably the most uncompromising and focused road car” the company has ever produced. The lightweight, high-performance variant of the Continental GT can accelerate from zero to 60 mph in 3.6 seconds, which is the fastest time of any road-going Bentley. The GT3-R is rare, and expensive: Bentley will produce only 300 examples, each priced at just under $340,000. Even rarer, pricier, and more uncompromising is the GT3, the racecar that inspired the GT3-R. It’s also based on the Continental GT and represents a collaboration between Bentley and the British racing outfit M-Sport. It debuted as a concept in 2012 and entered competition at the end of the 2013 racing season, marking Bentley’s return to motorsports a decade after a pair of its Speed 8 racers placed first and second at the 24 Hours of Le Mans.

The GT3 completed its third full season of racing in the fall, competing throughout the year in a total of six series in North America, Asia, and Europe. Among the five teams that drove the car was Bentley Team Absolute, a factory-supported outfit that raced in the GT Asia series and in North America in the Pirelli World Challenge. On a Tuesday in September at the Sonoma Raceway in Northern California, Team Absolute invited me to take a spin in one of its two GT3s and experience the differences between the racecar and the road car it inspired.

I would drive the No. 88 car, which Team Absolute driver Adderly Fong of Hong Kong had piloted to a ninth-place finish 2 days earlier on Sonoma’s 12-turn, 2.3-mile road course. Fong’s teammate Andrew Kim, from South Korea, placed second. Those performances helped Team Absolute earn a fifth-place finish (among 24 entries) in the series’s team standings when the season concluded in October. The 2017 Pirelli World Championship season begins the weekend of March 11 and 12 in St. Petersburg, Fla.

With its menacing stance, massive spoilers, and implausibly fat Pirelli PZero racing slicks, the GT3 was a daunting sight descending to the pavement on the transporter’s hydraulic lift. It shares the same basic shape as the Continental GT, but it has none of the fineries that would prevent it from lapping a racetrack as swiftly as possible. There is no wood trim or leather lining in the cabin; instead, it contains a steel roll cage and unfinished carbon-fiber and aluminum surfaces. The knurled-metal paddle shifters are among the few remnants from the production car’s interior.

Indeed, the racecar is more than 2,200 pounds lighter than a Continental GT road car. The carbon-fiber doors alone account for a savings of about 220 pounds: Each weighs a wispy 15 pounds. The trunk lid, hood, front splitter, and rear wing are also made of carbon fiber. Bentley and M-Sport also removed more than 50 electronic control units and electrical systems from the Continental GT. The GT3 is so light that it requires ballast to meet the Pirelli World Challenge’s minimum weight requirement. Once I maneuvered past the roll cage, through the safety netting, and into the deeply sculpted Recaro bucket seat—on the car’s right-hand side—I found other features that are unique to the racecar. The steering “wheel” is trapezoidal instead of round, and it contains 16 buttons and dials for controlling functions and settings ranging from traction control to ABS thresholds. A panel on the center console includes controls for lighting, various electric systems, and fire suppression.

I activated the main switch and fired up the fuel pump before pressing the button that starts the 4-liter twin-turbocharged V-8. The engine has been repositioned to the rear of its bay, so it sits closer to the cockpit than it does in the road car. It can be tuned as high as 600 hp and sounds louder, richer, rougher, and more robust than its predecessor. The engine was moved to improve the car’s weight distribution; the front-to-rear ratio is now 52/48. Removing the road car’s front-wheel-drive components (to comply with racing regulations) and installing a new Xtrac pneumatically activated, sequential 6-speed rear-wheel-drive transmission also improved the car’s balance.

To launch the GT3 smoothly off the line, I depressed the foot clutch, clicked the paddle to shift into first gear, and carefully modulated the throttle and clutch. In a racecar, you want to maintain a low and steady speed through the pits, but the GT3’s sensitive accelerator pedal and driveline lash make it easy to jerk the vehicle forward. Initially the car felt like an unbroken horse, a violent and uncontrollable beast ready to bolt at any moment. But as it climbed the hill on the Sonoma course and approached turn 1 in second gear—with the engine roaring and the gearbox and differential whining like sirens—it began to display an effortless athleticism. It attacked the corners, devoured the straights, and scrubbed off speed as quickly and efficiently as it accelerated.

The car instantly responded to every input I gave it, whether I stuck the throttle, turned the wheel, jabbed the brakes, or tapped the shifter. Responsive as the GT3 was, on low-speed corners—especially before the tires warmed up—it showed a surprising lack of mechanical grip. Though I had the traction-control intervention set at a conservative 7 out of 8, the tail slid when I aggressively applied the throttle while exiting those turns. But when negotiating higher-speed corners with warm tires, the GT3 remained firmly planted as it arced across the apexes. Credit the car’s sizable spoilers and aerodynamically optimized bumpers, sills, and fenders, which help create so much downforce that the GT3 can achieve a heady 2 gs of lateral acceleration.

The GT3 is built strictly for racing, so it doesn’t possess the gentility, stateliness, or luxury amenities that characterize a Bentley road car. It is, however, very fast, a little naughty, and a lot of fun.