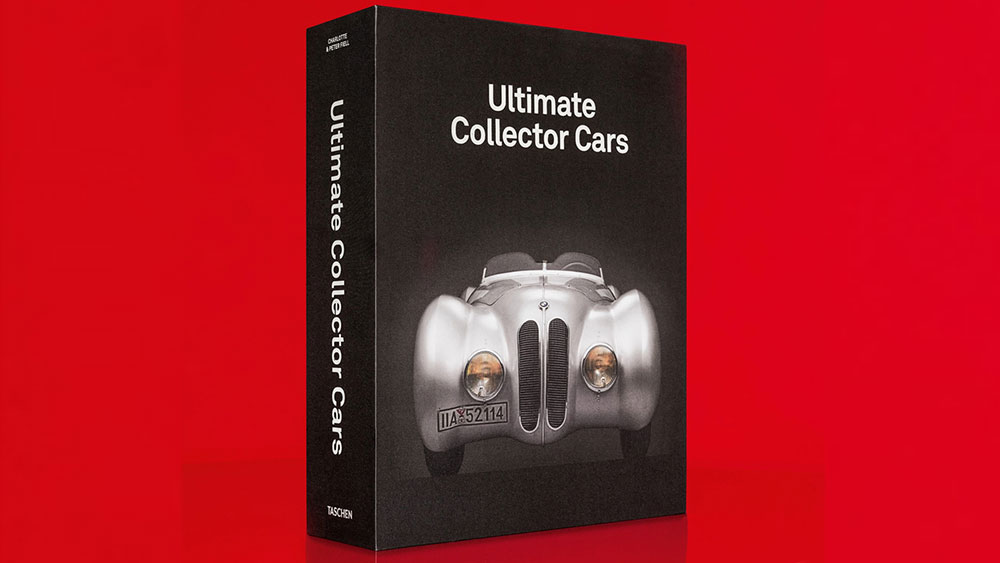 Every year brings new automotive publications, making space on a collector’s shelf as hard to come by as room in the garage. Some of these books are the result of substantial research; scholarly tomes that reveal new stories and previously unseen documentation about specific marques and the people who made their history. Others assume the role of primer, offering a taste of their subject and urging interested readers to take a deeper, more serious dive.

In any category—whether art, architecture, design or automobiles—there exists the ubiquitous coffee-table book, more often a decorator’s accessory than a legitimate publishing endeavor. Ultimate Collector Cars, a new 904-page, two-volume set from Taschen, however, is anything but, though at more than 11 x 14 inches, it’s nearly as large as some coffee tables. And weighing more than 24 pounds, it’s a reminder that one lifts from one’s legs, not with one’s back.

“Magisterial” is the word that comes to mind when unboxing the slipcase and its two thick volumes. The binding, in black linen, is the first indication that this is a fastidiously manufactured book with impeccably designed layout and text. The images, captured by an assortment of leading car photographers, are eye-wateringly gorgeous and surprisingly uniform, contrasting full-car photos with sumptuous details, and throughout, the chapters are punctuated with historic photographs that flesh out each era. Speaking of fastidious, the heavy paper stock and luxurious printing will have most careful readers washing their hands before digging in, as the glossy black backgrounds of many images deserve better than greasy fingerprints or casual flipping of pages.

Historic photos of Enzo Ferrari and racer Juan Manuel Fangio with the 250 MM complement its coverage.  Photo: Courtesy of Taschen

You could enjoy Ultimate Collector Cars without reading a word but, of course, that would be a mistake. Charlotte and Peter Fiell are specialists in transportation and design, and authors of numerous Taschen publications. Volume 1 contains a forward by auction impresario and RM Sotheby’s founder Rob Myers, followed by chapters devoted to 1900 through 1910, the 1920s, 1930s and 1950s. Absent are the 1940s, when far less than a half-decade’s worth of consumer vehicles were made due to World War II.

The book is interspersed with insightful interviews, including conversations with collector Dr. Frederick Simeone, whose Simeone Foundation Automotive Museum is home to some of the world’s greatest cars. The Duke of Richmond and Gordon, founder of the Goodwood Festival of Speed and Goodwood Revival, contributes to the chapter devoted to the 1950s.

The Jaguar XJ13 finds its place in the publication.  Photo: Courtesy of Taschen

Chapters in Volume 2 cover the 1960s, a watershed era of postwar design. A stroll through that decade presents a visual feast of 24 delectable sports cars, each an indisputable masterpiece. Most, like the Ferrari 250 GT SWB, saw their way into competition; others, like the Maserati Tipo 61 “Birdcage,” were strictly made for racing. Then there were some, like the Aston Martin DB5 Convertible, made purely for the road, while a few, like Jaguar’s XJ13, barely saw the light of day. Next up are the 1970s through ‘90s, and finally the 2000s, wrapping up with the exclusive 2020 McLaren Speedtail.

In all, the printed compilation showcases 100 automobiles that, if assembled together, would constitute a dream collection by any standard. The two-volume set is not only a coffee-table centerpiece, but a conversation-starter among collector friends.  And it’s sure to encourage healthy debate as to which of a reader’s favorite models should have also been included. Priced at $250, Ultimate Collector Cars is limited to a first printing of 10,000 numbered copies.