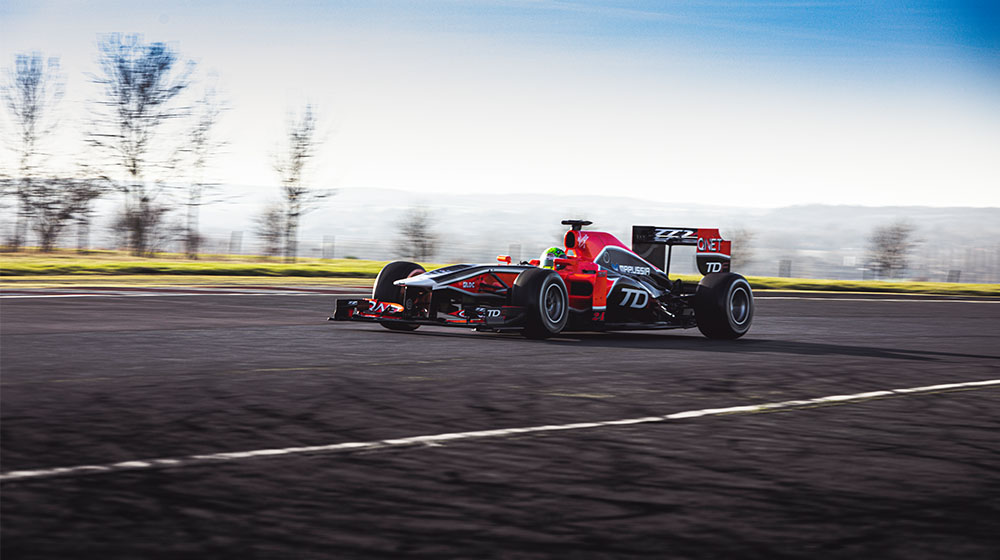 Every now and then a significant Formula 1 race car will roll across the auction block, like Michael Schumacher’s Ferrari F2002 which sold last November in Abu Dhabi. However, buying such a car—although thrilling at the time of purchase—doesn’t usually offer the winning bidder much excitement beyond the initial acquisition. After all, who wants to be the person responsible for clipping a barrier in a record-setting Ferrari or—worse yet—putting it into a wall.

Fortunately, for those who want to experience the high-speed thrills that such a technologically advanced vehicle can deliver, there is another option. Tour-de-Force, a British engineering company with decades of Formula 1 experience, now offers private ownership of state-of-the-art Formula 1 racing machines. The program, which has been two years in development and is priced at about $1.9 million, provides a select group of auto enthusiasts the chance to drive their own F1 race cars at some of the world’s most prestigious and challenging circuits.

What does almost $2 million get you? For starters, you’ll take ownership of a 1,300-pound racer outfitted with a carbon-fiber monocoque and equipped with a turbocharged, inline 4-cylinder engine that churns out 600 hp at 9,000 rpm. This is a highly advanced competition car, one built by a team of former F1 engineers and mechanics who had previously worked for Williams, Mercedes and Renault racing teams.

Capable of exceeding 200 mph and sprinting from zero to 60 mph in less than two seconds, the TDF-1 car is a single-seat rocket on wheels. “As a professional racing driver, I’ve been behind the wheel of some impressive cars in my career, but nothing comes close to the TDF-1,” says Jessica Hawkins, a development driver for the program. “The responsiveness, balance and agility is second to none, and the raw speed is incredible.”

The race car is custom fit to each owner.  Photo: Courtesy of Tour-de-Force.

In addition to the race car, which is custom fit to each owner, the program also provides buyers with pit equipment, a spares package, flight cases (for transporting the car anywhere around the world), driver equipment and access to a development program that makes it possible for drivers of all ability levels to effectively pilot the TDF-1.

“We know the complexities of keeping these cars on the track, from maintenance and repairs to running costs and the sheer skill needed to drive them well,” says Matt Faulks, director of TDF. “With TDF-1, we wanted to create a package that allows enthusiasts to have a genuine F1 experience that is more accessible and cost-effective.”