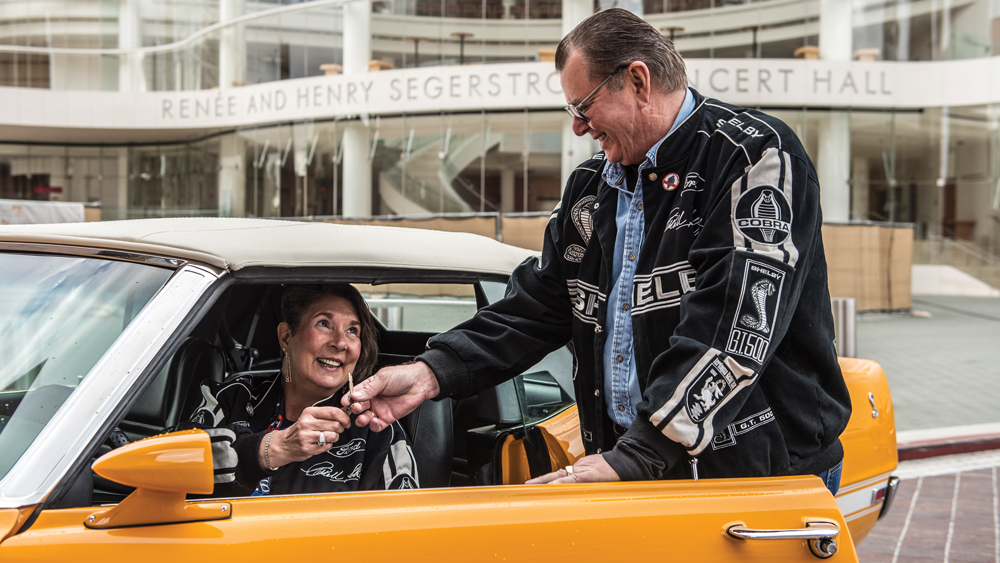 As Ted Segerstrom and restorer Tim Lea roll up to my studio with an enclosed trailer in tow, I know something special has to be inside. Segerstrom’s print shirt, populated with colorful Mustangs, tells me our conversation will center squarely on cars—and not just any cars: Shelby Mustangs. Although farming and real-estate development (including South Coast Plaza in Costa Mesa, Calif.) subsume the business hours of Segerstrom’s work week, his passion for Shelbys never takes a day off. “I got my first real Shelby, I think, in 1985,” Segerstrom recalls. “The second one about 1990. And then it kind of went from there. Today, the collection consists of about 85 cars; 90 percent of them are Shelbys. There are some big-block Fords and Boss Mustangs to round out the Ford side of it. There are a lot of the newer ones, too. And with Tim’s help, we have been able to dial in some of the ’68 KRs. Those are probably my favorite to drive.”

“The 1968 Shelby GT500 KRs are rare in themselves,” says Lea. “Shelby only made 57 four-speed, air-conditioned KR convertibles. Of the five yellow ones, Ted has managed to get his hands on all five, and we are restoring all of them. So just that collection of yellow cars is almost 10 percent of the total KR four-speed market right there.”

Part of this prized cache occupies the trailer at hand: a yellow convertible fresh out of a yearlong restoration and ready for the show field. “Tim and I prefer to keep the cars as factory-original as possible,” says Segerstrom. “Some of the original parts are definitely hard to find, and they are sometimes worth their weight in gold. But I think that’s important. I mean, you can’t preserve history if it’s altered.”

Segerstrom’s next project will be a white 1966 GT350 with Paxton supercharger. “It was the first one built,” he says. “And it was [Carroll Shelby’s]. He drove it around L.A. Of the 11 they built in ’66, there was only one automatic, and it disappeared after Carroll sold it in ’67. It’s been gone for 48 years, and we were fortunate to get a lead on it. It turned out to be verified as the first Paxton production car. So Tim’s going to get a car that’s other than yellow.”

Segerstrom has big plans for the collection. “My wife [Rae] and I decided that the best way to present the collection would be as an event center—a venue for the community for field trips with the schools. A kind of a museum,” he says. “I belong to the Shriners, who sponsor 22 children’s hospitals across the nation—free to the kids—and our life’s work is to help our local one in Pasadena. As a nonprofit, donations and any profits will go directly to the children’s hospital.”

His wife takes a hands-on approach to that mission. “She does a lot of embroidering, and her dream is creating little quilts for every child who comes in, which they take with them when they leave, because a lot of kids come in there with nothing. It’s all about teamwork and sharing,” he says. “I only own half the cars; she owns the other half.”