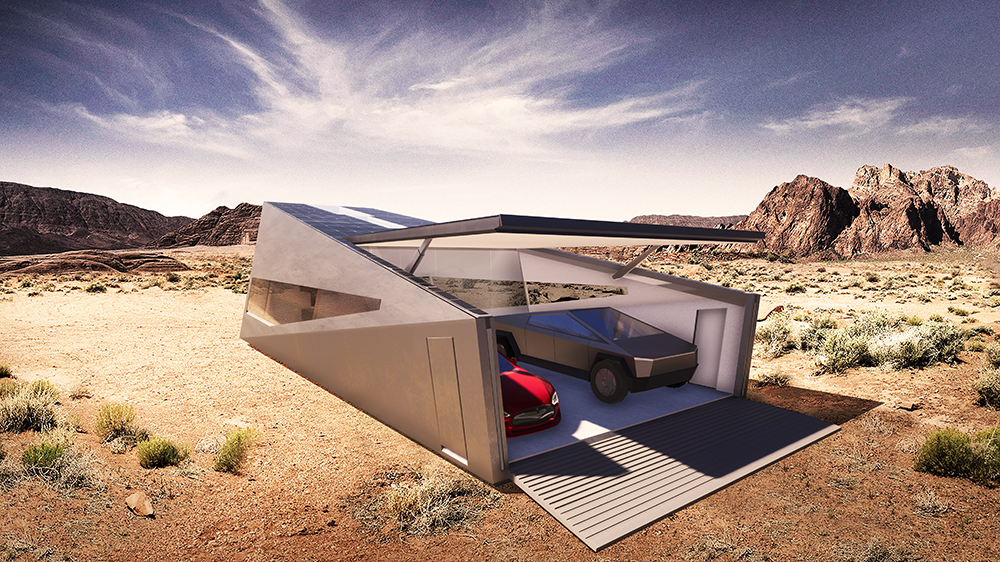 It’s not easy to identify the most absurd thing about the Tesla Cybertruck. Is it the circa-1980s name? Is it the ’90s-era video-game aesthetic? Or maybe it’s that its bullet-proof glass that doesn’t seem particularly bullet proof?  Whatever your choice, near the very top of the list must be the fact that the vehicle won’t fit into a standard-size garage.

Earlier this month, YouTuber and Tesla superfan “Tesla Raj” posted a video in which he used an augmented reality app to illustrate that the company’s first pickup was too big for his garage. That’s right, if you, like Tesla Raj, don’t have an extra-large garage, you’ll be forced to park your Cybertruck in the driveway or—even more ridiculously—on the street when the vehicle finally arrives in 2021.

Luckily, if you’ve come under the spell of Elon Musk’s latest brainchild, design firm Lars Büro has you covered. A week after a rendering of a garage tailor-made for the electric truck went viral, the New York-based firm has announced that it plans to put its Cybunker into production.

Lars Büro teases the Cybunker as a structure that can be used as “a hi-tech depot, an ADU (Accessory Dwelling Unit), or an off-grid residence.” Measuring an initial 600 square feet, the modular structure can be expanded an additional 1,800 square feet, according to the firm. Bearing more than a passing resemblance to the truck, the structure has room for two Teslas at its smallest. And let’s face it, if you like the Cybertruck’s design enough to buy one, you probably won’t mind that your garage looks just like it.

If the “Cybunker” sounds like an elaborate troll, it’s not. On Monday, a representative for Lars Büro assured Robb Report that the project is very real. The structure is currently in the engineering phase, the representative said, and the company hopes to announce pricing, final specs and availability early next year.

That’s good because, as ridiculous as the Cybertruck may seem, a whole lot of people appear to be very interested in Tesla’s first pickup. According to Musk, 200,000 customers preordered the vehicle during the weekend following its late November unveiling. Even if only a fraction of those preorders (which only required a refundable $100 deposit) are converted to actual purchases, that’s still a substantial number of Cybertrucks in need of a Cybunker to park in. Maybe Lars Büro is onto something after all.