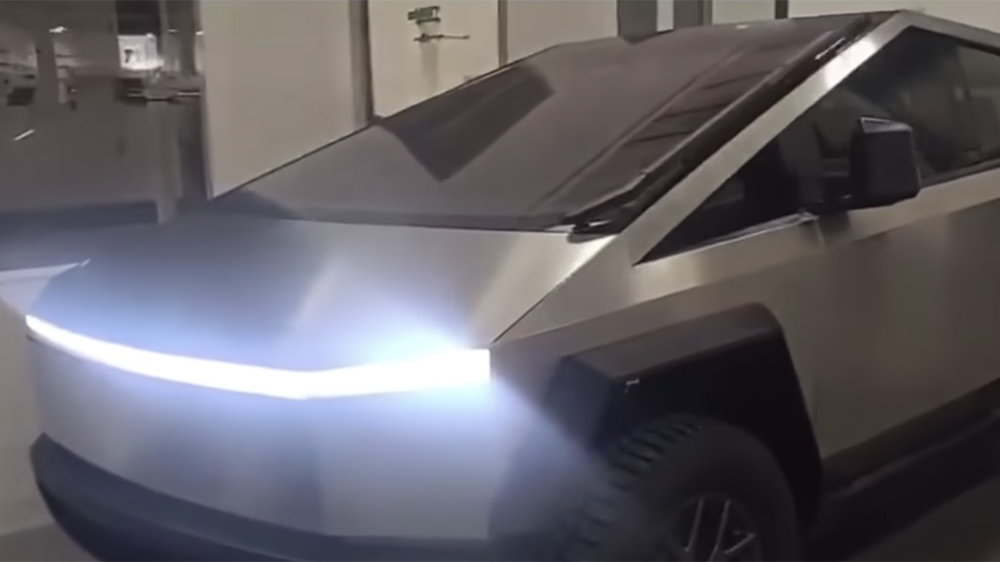 Production of the Tesla Cybertruck may have been delayed yet again, but we now have our best look at the much-anticipated EV, thanks to new “leaked” footage.

Days after photos of an alleged Cybertruck prototype started circulating online, an unofficial video showing what appears to be the same vehicle was posted to social media on Monday, according to Eletrek. Although, the truck doesn’t do anything in the clip, this is easily the best look we’ve had at the EV since it was first announced in November 2019.

The video, which runs just over three and a half minutes, shows a Cybertruck prototype parked on the floor of Tesla’s Austin, Texas Gigafactory. For the entirety of that runtime, a couple workers at the facility can be seen circling and talking about the vehicle. The sound has been muted—presumably to protect their identities—though captions remain. Our favorite quote: “Man, tell Elon he doing too much.”

The footage shows three key differences between the prototype and the show car that Tesla CEO Elon Musk stood next to at its unveiling: The windshield has been equipped with a giant single wiper, side view mirrors are now present and the aero wheels have been swapped out for a more traditional set. Other than that, everything looks the same, down to the absence of visible door handles.

The video does raise one big question, though: This is easily the most complete look at the EV’s exterior since it made its debut more than two years ago. And, as Car and Driver points out, it’s easy to wonder how and why the video ended up online now. Perhaps, it’s Tesla’s way of reassuring the thousands of people who have reserved the EV that it is still on the way, despite production having recently been delayed until the first quarter of 2023. Or, maybe, security at the Austin Gigafactory is just really lax.

Robb Report could not reach Tesla for comment. The EV maker disbanded its public relations department in fall 2020 and appears in no rush to set another one up.

Will the Cybertruck ever come out? It’s hard to say at this point. The battery-powered pickup was originally scheduled to go into production in 2021, a date that has now been pushed back at least two years. It’s easy to wonder if the Cybertruck could end up becoming another version of the Roadster, an eagerly anticipated EV that has experienced perpetual delays since it was first unveiled in 2017.

To be sure, Tesla and its EVs have achieved more than anyone could have imagined over the last decade. It now remains to be seen whether or not it can deliver on some of its biggest promises.