It’s hard to think of a vehicle that has received as much fanfare as the Tesla Cybertruck did when it was revealed last fall. Whether you’re an auto enthusiast, a tech obsessive or just an average Joe who happened to be online for a few minutes last November, chances are you’ve now heard about the EV giant’s first truck and you probably have an outsize opinion about it.

Why so much attention for a pickup truck? It could have something to do with the company’s cofounder and CEO, Elon Musk, and his penchant for tweeting about “the coolest car [he’d] ever seen” in the months leading up to the Cybertruck’s debut. The tech titan promised a futuristic vehicle that would look like something out of the sci-fi classic Blade Runner. And while that may have been a bit of a stretch, there’s no denying that the Cybertruck looks like nothing on the road, gas- or battery-powered.

That’s because the all-electric pickup seems to throw almost everything we thought we knew about automotive design out the window. There are no rounded corners or flowing, aerodynamic lines, just sharp edges and dramatic angles. The vehicle’s exterior has more in common with the polygonal vehicles in a primitive video game than it does any other cars currently on the market. But because this is a Tesla, the car promises some mighty impressive performance numbers, including 500 miles of range and the ability to tow up to a whopping 14,000 pounds.

Of course, in what has become a signature practice with the company, the electric truck was also unveiled long before it would actually be ready for production. The time between the Cybertruck’s announcement and planned on-sale date isn’t as bad as the still-unreleased Roadster, but we still have to wait until at least late next year for the pickup to go on sale. In the meantime, here’s everything we know about one of the most hotly anticipated vehicles in recent memory. 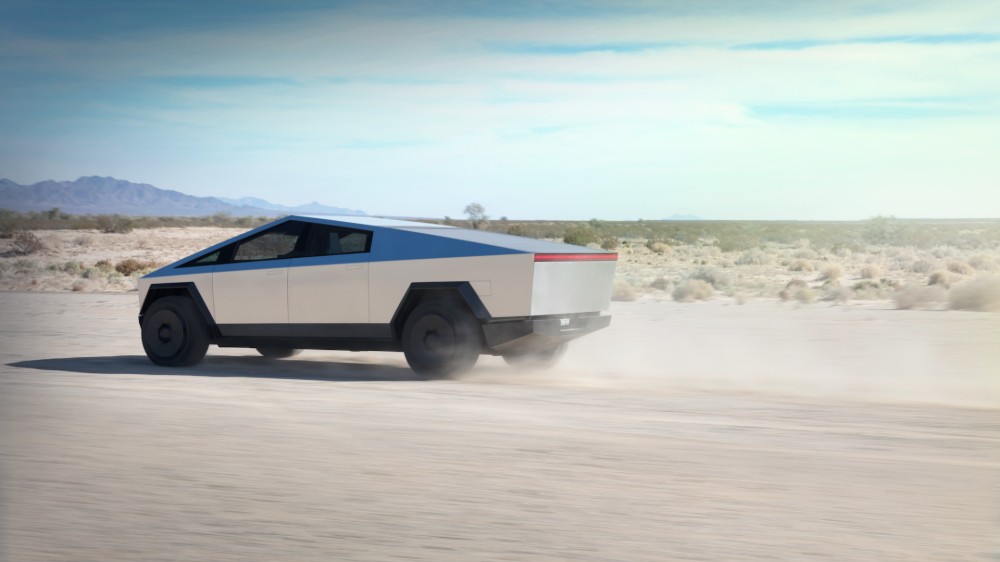 While the Cybertruck’s outlandish exterior may be what earned it so much attention last year, the most radical aspect of the vehicle may be its performance. Never one to undersell, especially a vehicle he had spent so much time building up, Musk basically promised that the truck would represent an electric revolution of sorts. And if the pickup delivers, he might not be that far off.

When it eventually goes on sale, the Cybertruck will be available in three different variants. The entry-level pickup features one motor and a rear-wheel-drive system, while the two- and three-motor models will both have all-wheel drive. As you may have guessed, the more motors your Cybertruck has, the better its performance, with the tri-motor version able to zoom from 0 to 60 mph in less than 3 seconds, which is basically unheard for a production truck. As of now, Tesla has not released any information about the Cybertruck’s horsepower, but we would expect each model to offer progressively more grunt. What we do know is that more motors will equal more range, with the top-of-the-line truck able to go the aforementioned 500 miles on a single charge. At the time it was announced, the vehicle’s range would have been a record for an EV, and while it’s since been eclipsed by the Lucid Air and the Tesla Model S Plaid, it’s still likely to be one of the longest-range vehicles on the market when it debuts.

The truck also promises the kind of towing capacity normally associated with the most powerful gas-powered trucks on the road. At the unveiling, Musk claimed the single-motor model will be able to tow 7,500 pounds, the dual-motor 10,000 pounds and the tri-motor 14,000 pounds, which is almost twice as much as the top-selling truck in the US, the Ford F-150. Tesla has yet to demonstrate these claims, or address how a giant payload will affect the vehicles’ performance in other ways, but those are enticing numbers. 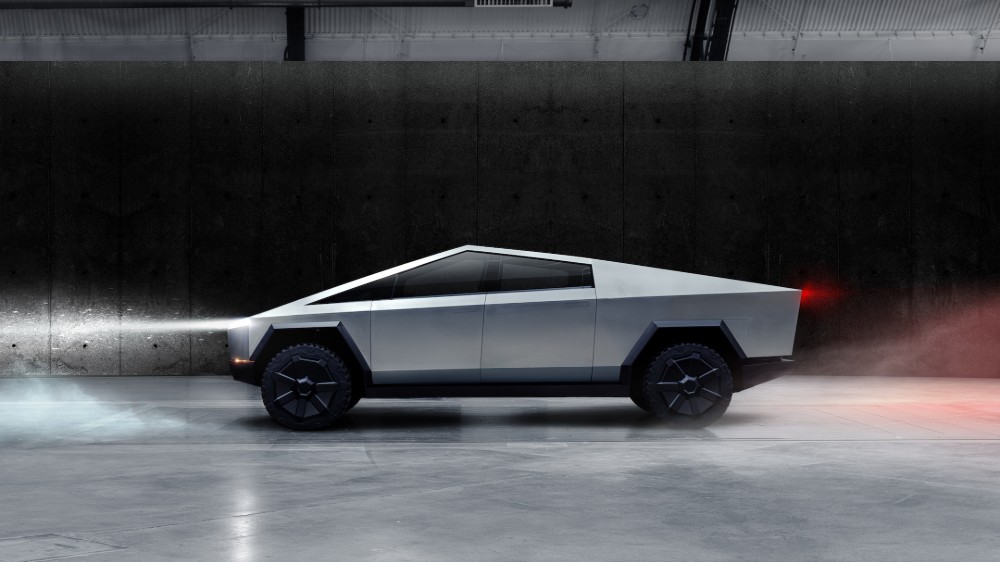 Any conversation about the Cybertruck will likely start with its exterior—and rightly so. The pickup looks like nothing on the road today, or at any time in the past for that matter. And even with at least a full year to go before its release, it’s hard to imagine that changing.

Almost from the moment it was revealed, the Cybertruck became a meme. The angular design is nothing if not bold. While other automakers obsess about smooth curves and flowing aerodynamic lines, the pickup is all sharp angles and flat planes. And that doesn’t just apply to its general body shape, but elements like its striking strip-like LED headlights, geometric windows and chunky wheel fenders. In fact, the designers seem to have been so dedicated to its geometric shape that they decided to do away with side-view mirrors entirely.

The vehicle’s out-there design does raise some questions, though. One reason why cars and trucks embrace shared design elements is because they help the car withstand the rigors of daily use and potential collisions. But this isn’t the case with the Cybertruck. For example, the vehicle lacks a “crumple zone,” the area meant to absorb the force of a crash. Two of its more striking design elements—the headlight strip and the absence of side-view mirrors—aren’t even technically street-legal at the moment. Oh, and unless the concept edition is reduced in size, the truck may not fit inside a standard-size garage.

Of course, the vehicle’s visual styling, angular silhouette and hulking size are far from the only unorthodox aspects of its design. The body will also be covered in an “impenetrable” structural skin of Ultra-Hard 30X Cold-Rolled stainless steel, which might explain the absence of a “crumple zone.” Let’s hope it’s tougher than Tesla’s Armor Glass. The supposedly unbreakable material embarrassingly shattered not once but twice during the vehicle’s unveiling.

Is the Cybertruck a thing of beauty? No. Are there some questions about whether or not its design is even feasible? Yes. But Tesla and Musk deserve credit for designing a pickup that few can look away from. Not only does the EV look markedly different from other trucks on the market, it completely breaks from the design language of the rest of the brand’s roster. Love it or hate it, you have to admit that the road will be a more interesting place with it in action. 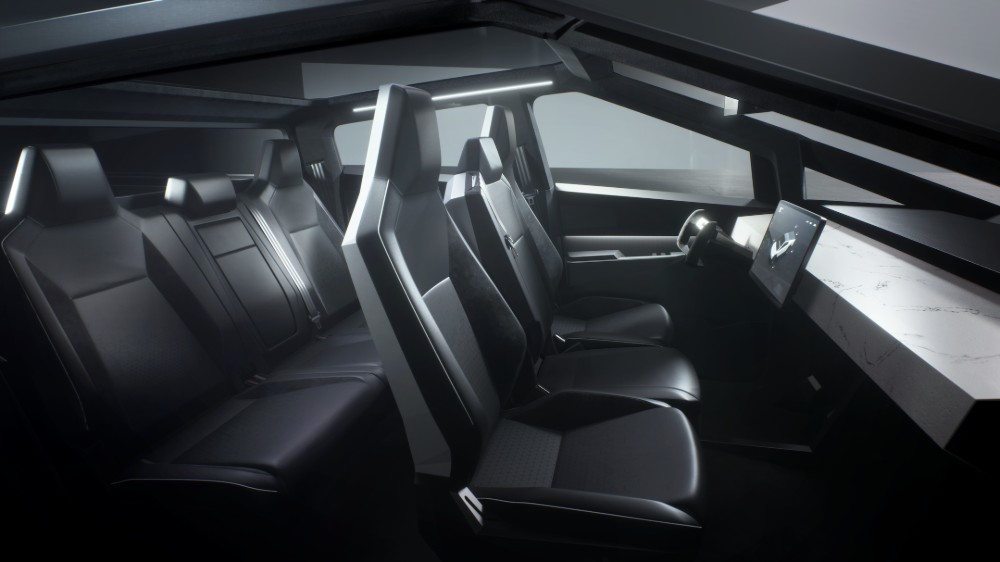 The Cybertruck’s interior is nearly as unique as its body. The exterior’s design language has been carried over, meaning there are lots of sharp angles, especially in the dashboard area, which looks like a flat ledge with a steering wheel and massive 17-inch touchscreen protruding out of it. It’s all a bit spartan, as are the seats. There’s some padding visible, but they don’t exactly scream comfort.

Yet the interior does look roomy. The marque claims that the Cybertruck, regardless of the version, can comfortably sit six adults and has 100 cubic feet of exterior storage. This will make sense to anyone who’s seen the Cybertruck up close; it’s 6.4-foot truck bed, or cargo bay as some are calling it, looks genuinely massive. But exterior storage isn’t just about the bed; the vehicle also offers lockable storage, including a vault, trunk and sailing pillars.

Musk has promised that the Cybertruck will be so much more than a normal pickup.  Late last year, the CEO said that the vehicle would be available with some “sick attachments.” And the burgeoning industry of add-ons suggests that he could be right. A stainless-steel, Airstream-like trailer and a camper configuration will allow you to turn the truck’s bed into a mobile living space. Also in the works is the Cyberquad, a four-wheel, electric ATV that fits right into the truck bed.

And those are just the official, first-party accessories. Other companies are already trying to get in on the action. The 10 months since the truck’s public debut has seen a slew of Cybertruck-inspired projects pop up around the globe. Perhaps most notable among these is a huge compound called the Cyberhouse that was very clearly inspired by the vehicle—and offers a garage that can actually house the pickup. 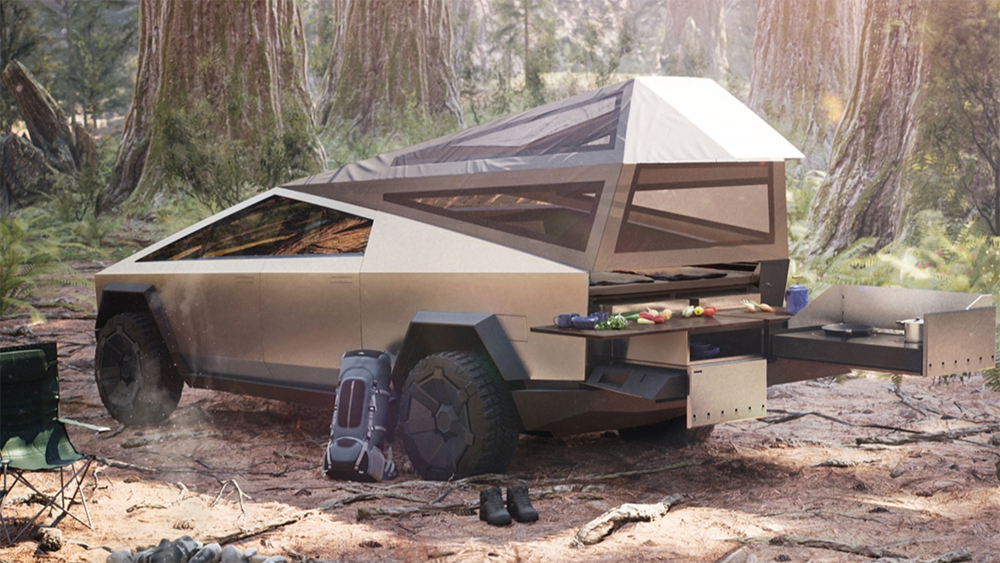 This optional configuration would turn the Cybertruck into a camper, with a tented bed and a pop-out stove for outdoor cooking.  Courtesy of Tesla

The Cybertruck’s Price: Will It Be Worth It?

What might be most surprising about the Cybertruck—and could be its most appealing feature—is its price. According to Tesla, the vehicle will be remarkably accessible. Despite its cutting-edge features and beefy performance, the single-motor model starts at an affordable $39,900, while the dual-motor and tri-motor editions will sell for $49,900 and $69,900, respectively. You can also add Tesla’s self-driving technology, Autopilot, to the vehicle for $8,000, though the brand warns that cost may increase over time. It’s also worth noting that Tesla’s Autopilot does not yet offer true autonomous driving; rather, it serves as an enhanced driver-assist feature for the vehicle.

There is a lot to be intrigued by with the Cybertruck, but its price may be most responsible for the wild preorder numbers. Within a week of its announcement, 200,000 people had reserved one of the trucks, and that number has grown more than three-fold since. Of course, it only costs $100 to preorder a Cybertruck, and that fee is completely refundable if you choose not to buy it. Still, those pre-orders offer proof that the vehicle is stirring excitement and anticipation ahead of its release.

More stories about the Cybertruck from Robb Report: