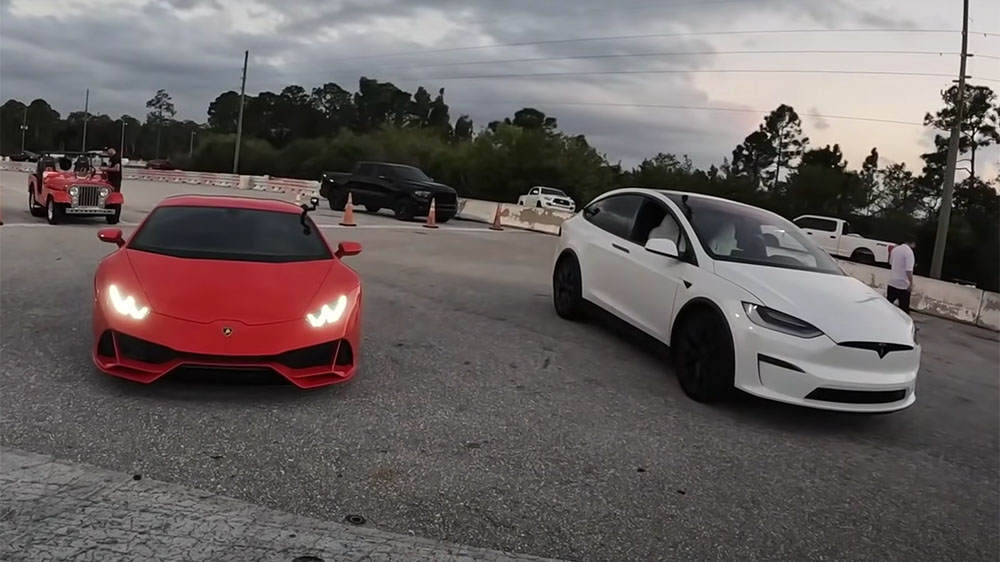 Here’s a trip down the drag strip that Tesla can be proud of.

After some recent drag-race losses, the EV maker is back in the win column after a Model X Plaid was caught on film besting the Lamborghini Huracán Evo over a quarter-mile. The EV doesn’t just beat the gas-powered supercar, either—it leaves it in its dust.

The video was posted to YouTube by DragTimes’s Brooks Weisblat earlier this week. Weisblat has used his Model X Plaid to beat other high-performance gas guzzlers like the Porsche 992 Turbo S in the past, and the race against the Huracán Evo was no different. In the first heat, the crossover SUV easily bests the supercar, even after giving it the briefest of head starts. It covers the quarter-mile in 9.89 seconds, while the Lambo does the same in 11.13. Both vehicles are faster in the second heat, but the Model X Plaid again comes out on top, making it to the finish line in 9.84 seconds compared to the Huracán Evo’s 10.84 seconds.

Throughout the video, Weisblat never expresses even a modicum of doubt about his Tesla beating the Lamborghini. And if you look at horsepower it’s easy to see why. The Model X Plaid’s electric drivetrain pumps out 1,080 hp compared to the 630 hp produced by the Huracán Evo’s 5.2-liter V-10. The SUV is also much heavier than the supercar (5,390 pounds compared to 3,650 pounds), though, giving the supercar the advantage in power to weight ratio (5.3 pounds/hp to 5.5 pounds/hp). Despite this, the Model X Plaid made easy work of its rival.

The resounding wins represent a nice bounce-back for the EV maker. Since last summer, we’ve seen Tesla struggle on the track, albeit in unofficial races like the one above. In August, the battery-powered Rimac Nevera hypercar absolutely smoked the 1,020-hp Model S Plaid in a sprint. In February, the prototype of Aptera’s electric three-wheeler took down a Model 3 with ease. Of course, as embarrassing as some of these results may be, there’s a reason everyone wants to show what their cars can do against a Tesla: Drivers and enthusiasts now associate the brand with battery-powered high performance.

And maybe this latest race will help boost the Model X’s relatively anemic popularity. It could use the help.