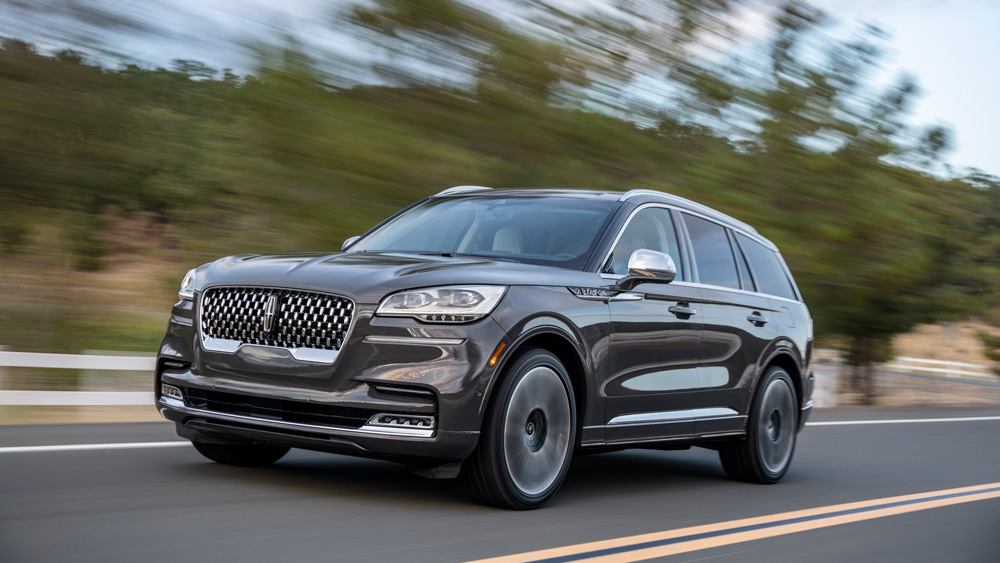 Lincoln’s transformation from struggling underdog to serious luxury contender crescendos with the 2020 Aviator (starting at $51,100), a large three-row SUV with sleek looks and a powerful hybrid option.

In the little town Yountville, home of The French Laundry and some of chef Thomas Keller’s other culinary ventures, the Aviator cuts a cool figure. Designers gave the SUV, which is smaller than the Navigator, a big presence without looking aggressive. As its name suggests, inspiration for the Aviator came from vintage aircraft and private jets.

Its confident stance, taut horizontal lines, and gleaming mesh front grille were meant, according to Lincoln’s erstwhile design director, to “seduce, not attack;” a recipe that proved successful judging by the approving glances from queuing tourists outside Bouchon Bakery as we passed. Subdued exterior colors include the mid-toned Magnetic Gray, Silver Radiance, and Ceramic Pearl. The top-of-the-line Black Label, (starting at $77,695, which includes personalized concierge services), gets exclusive colors including Flight Blue and Chroma Caviar Dark Gray. Wheels range from 19 to 22 inches and all use a variation of an aircraft-like turbine design.

That elegance carries over into the cabin, where horizontal lines again dominate, from the rectangular air vents to the wide, thin swath of open-pore wood that stretches from door to door. The central touchscreen is not the biggest on the market, but it fits with Lincoln’s philosophy of calm sanctuary, and does just what you need it to do without feeling overwhelming. A floating center console presents a manageable set of controls at an easy-to-reach angle, with space beneath for storage.

Upgraded front seats have 30-way adjustability and can cradle and massage passengers of varying heights and sizes. Second-row seats are spacious and can recline, tilt, and fold flat, and even the third row proves comfortable for adults on shorter trips. Black Label models offer interior themes which include “Flight,” clad in tan and ebony leather, with appliqued trim that designers say mimics those used on early airplane instrument panels. The Aviator’s cargo space is 41.8 cubic feet behind the second row and 18.3 feet behind the third row, and is the same for hybrid models, thanks to the underfloor configuration of the battery pack.

Wheels use a variation of an aircraft-like turbine design.  Photo: Courtesy of Lincoln Motor Company.

Although the Lincoln isn’t littered with digital screens, that doesn’t mean its devoid of the latest technology. New for the Aviator is a feature that allows you to use your phone as key, which enables drivers to lock, unlock, start the car, or roll down the windows using an iPhone and Android-compatible app via Wifi or Bluetooth, the latter of which can work in areas without a cell signal, such as underground parking garages. For those who dare to venture out without their phones, Lincoln’s old-school keypad remains on the side of the driver’s door, allowing owners to lock and unlock the vehicle by punching in a code.

On the same Napa County roads we drive for Robb Report’s Car of the Year event, it’s clear that Lincoln engineers have achieved every bit as much success as their design counterparts. The base engine is a twin-turbocharged 3.0-liter V-6 that makes 400 hp and 415 ft lbs of torque, more than enough to propel an Aviator full of people and luggage past some of the region’s most famous wineries. Combined with a silky-smooth 10-speed automatic transmission, the Aviator is the quietest, most able Lincoln we’ve driven to date.

The base engine is a 400 hp, twin-turbocharged 3.0-liter V-6.  Photo: Courtesy of Lincoln Motor Company.

“It was important that this vehicle lived up to our standard of effortless acceleration,” says John Davis, global chief engineer for Aviator. But the Aviator does not succeed on engine dynamics alone. The vehicle stays stable through the twisty roads despite its size, thanks in part to its all-new architecture and the optional adaptive suspension, which uses multiple sensors to read the road ahead within milliseconds and adjust accordingly. Combined with an air spring option, the Aviator practically glides over the bumps in the rough roads caused by last spring’s heavy rains. Drive modes similar to those found on other Lincoln vehicles include “Excite,” which allows the engines to rev higher and holds gears longer, as well Slippery for the wet and Deep Conditions for snow.

The star of the Aviator lineup is the Grand Touring plug-in hybrid (starting at $68,800), which pairs the gasoline engine with a 75 kW electric motor for a combined output of 494 hp and a hearty 630 ft lbs of torque and a total range of more than 400 miles on a single tank of gas. The Aviator hybrid retains all of the gas engine’s comforts and then some, such as the instant low-end torque characteristic of electrified power trains. As with Black Label editions, the Grand Touring comes equipped exclusively with all-wheel drive (AWD); on other models, rear-wheel drive comes standard and AWD is an option. A Pure EV mode allows the vehicle to run solely on electricity, while Preserve EV mode saves juice for later. Although drivers can get up to about 18 miles on pure electricity, Davis hopes they will put it in automatic mode and forget it. “It’s a good balance on delivering performance while giving some electric range,” he says.

The Aviator Grand Touring is compatible with level I or level II chargers, and can be fully charged via the latter in three or four hours. One thing to note for those looking to tow their boats: Despite its increased torque, the hybrid’s towing capacity (when equipped with a tow package) is limited to 5,600 pounds, compared with the gas version’s 6,700 pounds.

With its alluring design, quiet ride and spacious cabin, the 2020 Lincoln Aviator is not only one of the best American SUVs on the market, it will prove to be stiff competition for the top-selling Lexus RX and other large crossovers from Acura, Infiniti, and Volvo. And with a price point that undercuts the German set, that means more visits for caviar at the French Laundry.