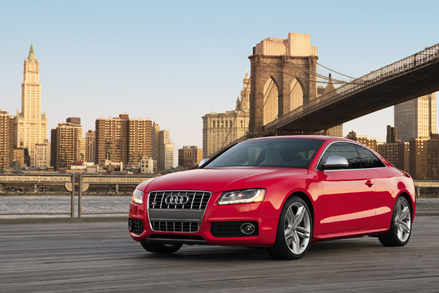 Audi’s new A5 and S5 make it hard not to stare. Sensational from any angle, these new coupes from Ingolstadt, Germany, possess a sort of urbanity and easy charisma that is positively magnetic.

We sampled both an A5 3.2 Quattro ($48,365, as tested) and an S5 ($56,215), similarly equipped with a six-speed manual gearbox, Audi’s Multi-Media Interface and DVD-based navigation system, and a marvelous 505-watt Bang & Olufsen premium audio system. The standard A5 features a 3.2-liter direct-injection V-6 engine producing 265 horsepower. Decidedly more comfortable in the role of relaxed grand tourer than that of hard-charging autobahn stormer, the six-cylinder A5 still manages to find 60 mph in 5.8 seconds and press on to an electronically limited 130 mph. For those desiring more brawn with their beauty, the S5 packs Audi’s 4.2-liter direct-injection V-8, good for 354 horsepower. So equipped, the coupe will hit 60 mph in a scant 4.9 seconds and cruise to a governed top speed of 155 mph.

The A5 shares its platform and power train with the forthcoming 2009 A4, and that’s no bad thing. But vastly more than a sedan with two fewer doors, the coupe has an identity that is entirely its own. That sensuous, low-slung shape rides atop a surprisingly long wheelbase (fully 4.1 inches longer than the sedan), creating ample space for four adults and imparting impeccable stability at speed and a silken highway ride.

Both cars are generally unflappable during normal driving, thanks in no small part to Audi’s Quattro all-wheel drive and a sophisticated, aluminum-intensive suspension, but with less weight over the front wheels, the A5 3.2 is the more balanced of the two. The V-8-powered S5 (not unlike the current S4 and RS4) can feel a bit nose-heavy during more enthusiastic cornering, although it redeems itself with pony-car straight-line acceleration and a positively glorious exhaust note.

Admittedly, a considerable amount of the attention our A5 and S5 garnered can be traced to a cameo appearance in a certain summer blockbuster, but even without big-screen product placement, this car has genuine star quality. “I am convinced that the A5 is the most beautiful car I have ever designed,” gushed Audi design chief Walter de’Silva. We’re convinced he’s right. (www.audiusa.com)