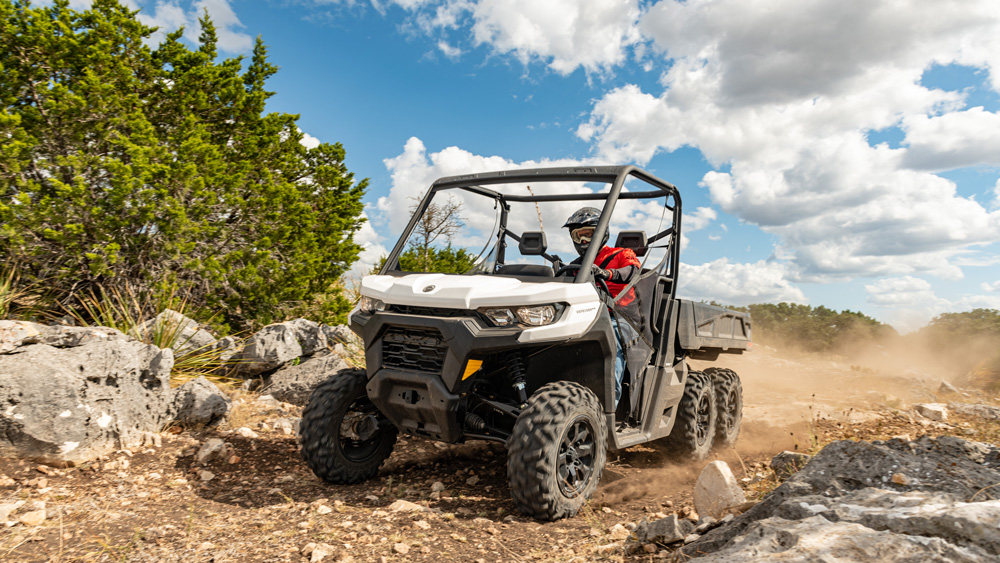 While the sport UTV segment steals all the headlines and glory shots with claims of mountains worth of horsepower and high-flying jumps, most utility models live somewhat in the shadows. The Can-Am Defender, however, is muscling in on the overlanding community in a fairly robust way.

Spending a day in the middle of Texas Hill Country, testing the full Can-Am Defender lineup, I found it difficult not to see the similarities between the Canadian manufacture’s latest utility-focused machine and the more famously named Defender from Land Rover. Sure, the Can-Am doesn’t have the same battle-hardened gritty design of the Land Rover, but on paper, and in practice, the Can-Am is arguably more of a spiritual successor to the original Land Rover Defender than the British marque’s 2020 model seems to be.

Traversing boulder-strewn creek beds, unnervingly steep inclines and gravel trails consisting of both tight switchbacks and fast sweepers, both machines tackled the terrain with a surprising amount of stability and confidence-inspiring poise. Typically, work UTVs feel more akin to softly sprung minivans. Even with 11 inches of ground clearance on the Limited and 13 inches on the 6×6—and almost a foot of suspension travel on both—neither model gave that characteristically top-heavy feeling. Both get 82 hp from the same 976 cc engine, which is more than enough grunt to keep the ride interesting.

Where the Limited sets itself apart, is with its fully enclosed cabin and HVAC system. And on a hot Texas afternoon, with temperatures flirting with the triple-digit mark, the climate control was a must. Seals along the door enclosures weren’t watertight by any means, and on the bumpy trails the doors rattled more than I’d like, but for an off-roader, the constant cool air was pure luxury.

Obviously, with the extra axel and set of wheels, grip and traction are the 6×6’s forte. But until you ascend a 45-degree-plus grade on loose gravel, it’s tough to comprehend just how much traction you have. The 6×6 attacks hills, ruts and boulders as if it were on two tank tracks. Additionally, the extra length in the bed afforded by the two-seat cabin and extended drivetrain means a more versatile cargo area measuring 4.5-feet wide and 6-feet long. Can-Am’s 6×6 also boasts a 3,000-pound tow capacity, which is higher than the Limited, and a 1,000-pound cargo capacity. Those specs perfectly set up the 6×6 for what’s to come.

The adventure markets are undoubtedly popular and are spreading into almost every facet of power sports on a daily basis. Considering the company has a product that’s already in a prime position to take advantage of the needs of mountain bikers, kayakers, rock climbers and trail riders, it’s a bit surprising that Can-Am hasn’t already leaned on its strengths. On display at the test-ride was a Defender equipped with bike racks, a rooftop tent and a full enclosure along with a handful of other add-ons. When asked about its availability in that configuration, Can-Am representatives merely said they were gauging interest.

They should already have their answer. Almost every relatable industry is getting in on the overlanding craze. People want a capable machine that can carry all of their gear as well as a few toys and shelter for a weekend adventure. It’s what classic car enthusiasts and the aftermarket companies all see in cars like the Land Rover Defender, the Toyota Land Cruiser and Jeep. Can-Am knows it has the perfect architecture and price point to go toe-to-toe with some of those full-sized rigs on capability alone. Perhaps it can stop gauging interest and build out the overlanding machine everyone wants.