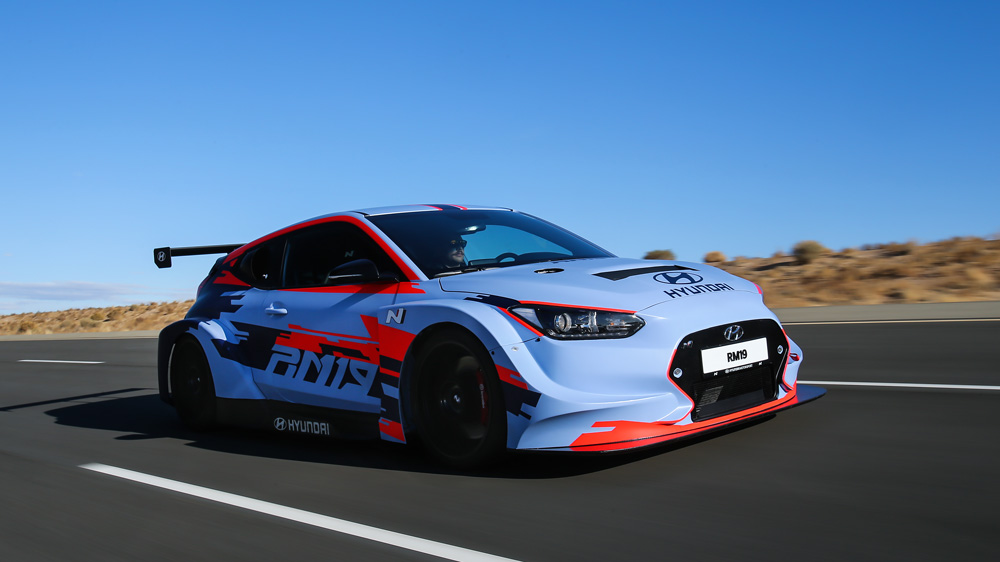 Explosive is the only word that comes to mind. I’m still catching my breath after a handful of laps behind the wheel of Hyundai’s mid-engine concept, skunkworks codename RM19, at the Hyundai Proving Grounds in California City, Calif. My heart’s still pounding, and temples sting from where the high desert wind meets the beads of collected sweat.

The prototype is radical: imagine a pedestrian Veloster hatchback, its chassis heavily reinforced and engine moved from under the hood to right behind the driver where the rear seats normally go. Pluck its 2.0-liter turbo four-cylinder out of a TCR race car and mate it to a race-spec six-speed sequential gearbox. Add adjustable suspension, 20-inches of sticky rubber and flare out the fenders accordingly. Don’t forget to throw on a roll cage, heavily bolstered five-point harness racing seats, a front splitter and massive wing and diffuser to the rear end.

The results are explosive in every way: how the racing transmission bangs from downshifts, unleashing a torrent of torque out of apexes (332 ft lbs); how the throttle bursts with acceleration as soon as toe touches pedal (zero to 60 mph in less than four seconds, 155 mph top speed); how the six-piston/380 mm ventilated disc brakes don’t just scrub speed, they pulverize it. I’ve driven my share of supercars, but there’s nothing quite as drumskin tight as the RM19.

It is a wild, wild experience. Having test-driven the original Veloster at its launch back in 2011, I can honestly say that Hyundai has now summited an echelon I never thought it would reach. Sure, the Veloster is a fun drive, but commuter fun in the way hatches can be. At the time, Hyundai had burnished its once-questionable rep by building reliable cars at great value. It was the first OEM to believe in its products so much that it offered a 100,000-mile warranty. Now, nearly a decade later, that reputation has gelled into one of the most reliable and highly rated brands in the industry.

The prototype delivers 332 ft lbs of torque and a top speed of 155 mph.  Photo: Courtesy of Hyundai Motor Group.

But never did I think Hyundai would ever develop a vehicle this…feral. The grip is otherworldly; as I ripped around the serpentine curves of the Proving Grounds racetrack with a pro driver babysitting from the passenger seat, sweat broke at the absurd speeds—and drift—the RM19 demonstrated. I relented on the throttle way before the RM19 even flirted with its grip limits. At one point, I underestimated the closing radius of a corner and started to oversteer, but the RM19 regained its posture almost immediately.

As reliable as this vehicle is at speed, however, it is also maniacal. The six-speed gearbox bangs through shifts with lightning-quick precision, but also with mechanical brutality. The noise in the cabin is ear-splitting even if euphonic. If this mid-engine architecture of the RM19 ever makes it to a production vehicle, surely it will require a ton of polishing. There are many rough edges that need to be filed before it’s polite enough for the streets, which only makes the RM19’s driving experience that much more singular.

On this circuit, its rear mid-engine layout and Hyundai’s extensive research in weight dynamics shine; the prototype attacks corners with lucid balance. You don’t stress; simply press the throttle, hold the racing wheel steady, and the RM19 does the rest—like an Olympian figure skater carving ice on long sweeping arcs across a still pond, blades somehow holding the razor’s edge. The RM19’s agility and handling are world class.

Hyundai’s experimentations with a mid-engine design began back in 2012 with a deeply secret project that explored frontiers where no previous Hyundai had even dreamt to tread. A year later, the South Korean automaker officially launched its Motorsport Division in the performance Mecca of Bavaria, Germany. Now in its eighth iteration, the RM19 (Racing Midship 2019) is peaking.

While based on the Veloster N TCR race car, the RM19 is its own beast. Of course, instead of bolting its engine upfront and sending 350 horses to the front axle like the TCR, the RM19 shoehorns the engine behind the driver, and whips its 390 horses to the rear wheels (for our sessions on the track the RM19 was limited to 360 hp). Needless to say, this creates wildly different racing physics. But as deliciously overcharged as the RM19 feels, execs hint it could be coming to a Hyundai dealership near you in the not-so-distant future.

“We’re not sure if it’ll ever make it into the showroom,” says Albert Biermann, head of R&D. “Right now there’s no decision.”

The race-focused cabin is certainly not quiet.  Photo: Courtesy of Hyundai Motor Group.

While greenlighting the RM19 into actual production is still up in the air, its mere existence makes one thing abundantly clear: The Motorsport Division and its N performance brand are both seen as critical pillars in Hyundai’s next phase. Building its headquarters in Bavaria is more than just showmanship: its proximity to the famed Nürburgring Nordschleife offers plenty of exposure to the Green Hell (the “N” not only stands for Namyang, home of Hyundai’s Korean R&D center, but also allegedly nods to the ‘Ring). Plucking Biermann, who headed BMW’s legendary M performance brand, to run Hyundai’s R&D was also deliberate.

And the results have spoken for themselves: Hyundai has absolutely dominated the Touring Car Racing (TCR) and World Rally Championship (WRC) series, winning the TCR Team championship and TCR Manufacturer’s title in the Pirelli World Challenge.

The big idea is for innovations engineered in the Motorsport Division to trickle down to the entire Hyundai portfolio—bolstering everything from the Veloster to the Sonata to even the volume-selling Kona crossover. With 9 models coming in 2020, and 2021 getting the N-Line treatment and three full-blown N models—including an SUV—it’s clear Hyundai is placing a ton of importance in performance. And should it ever release a vehicle as insane as the RM19 on public roads, then Hyundai will most definitely have arrived.