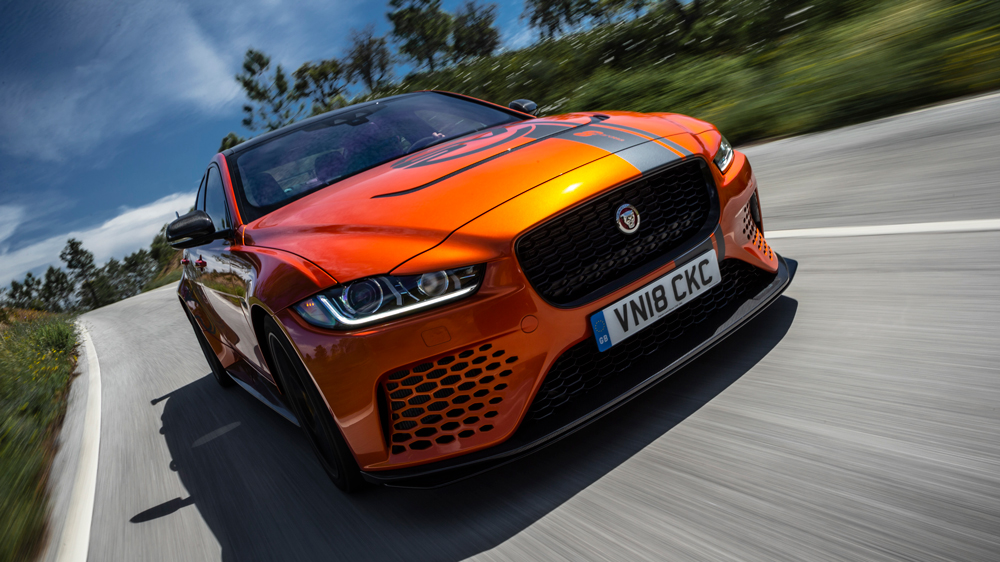 Do you remember the magical year 2008? Danity Kane was dominating the airwaves, you could buy a house in LA for under $10 million, and no one knew what the hell a Steph Curry was. But more importantly it was the halcyon era for overloaded, Gamma Ray-blasted super-sedans. You remember those years: the Mercedes-AMG C63 came fresh out of the box with a naturally aspirated 6.2-liter V-8 plucked from the $400,000 gullwing AMG SLS. Similarly, the Audi RS4 had just been unleashed on American roads, and the BMW M3 was still considered one of the greatest cars on the planet.

The Jaguar XE SV Project 8 is a callback to that magical era, and there’s very little else like it currently in showrooms (quite literally—only 300 examples of the Project 8 will be sold worldwide). This is a car built for hyperbole: imagined, designed and scripted for the abuse of words. Hit an open patch of road and tiny horns will erect from your skull. Drop the throttle—no need to downshift, ever—and the Project 8 elicits a blood-curdling howl and neck-snapping thrust as it takes off into the horizon, seemingly bending the light at the corner of your vision.

Jaguar has already established its pension for loudmouths with the vociferous F-Type R—one of the more obnoxious, overrun-sputtering bullies in the automotive industry. The Project 8 does nothing to diminish that reputation: Stepping on the throttle sounds like you kicked a werewolf in the ribs with steel toe boots.

A 592 hp car built for hyperbole.  Photo: Courtesy of Jaguar.

Unlike some modern super-sedans, however, the Project 8 is not a one trick pony—a straight-line rocket ship built simply for drag-strip boasting. The car is calibrated from nose to tailpipe for total track domination. It is a robust effort, a street-legal race car completely hand-built by the team at Jaguar’s Special Vehicle Operations (SVO) in Warwickshire, England. The rebuild is holistic, contributed to by nearly every bolt of the vehicle; the only body panels it shares with the base XE, for instance, are the roof and front doors. The rear fenders bulge so salaciously from the body to cover the widened track and fat Michelin Pilot Sport Cup 2 tires it is almost immoral.

Built on the bones of the donor XE’s aluminum chassis, already lightweight and rigid, the Project 8 is then filled out with every goodie Jaguar engineers could source. At its heart, Jaguar’s already blistering 5.0-liter supercharged V-8 is further bolstered and optimized to churn out 592 horses—making the Project 8 the most powerful street-legal Jaguar ever. Electronically controlled Continuously Variable Dampers (CVD) offer three levels of stiffness (Comfort/Dynamic/Track), with the top Track setting so unforgiving you will likely avoid it in solidarity with your kidneys (plus, on the street, Dynamic offers more than enough power/sound/hooliganism for any non-sociopath).

Only 300 examples will be made.  Photo: Courtesy of Jaguar.

Beyond the already severe Track setting, owners can dial things up even one step further by mechanically adjusting the XE SV Project 8 specifically for the circuit. Suspension can be lowered another 0.6-inches, the front splitter offers 2.4-inches of lateral movement, and the Concorde-sized rear wing can be adjusted for even greater downforce.

The end result speaks for itself: The XE SV Project 8 set the fastest lap time ever for a production sedan around the Nürburgring Nordschleife, and earlier this year set a similar lap record at Laguna Seca. Yes, its 200 mph top speed and zero-to-60 mph burst of just 3.3 seconds are impressive on paper, but its agility and balance are next-level in practice.

The record-holder for fastest lap by a sedan at Nürburgring.  Photo: Courtesy of Jaguar.

We didn’t have a chance to unleash the XE SV Project 8 on a track. You would think that was a disappointment—it wasn’t. As a throwback to that golden era in super-sedans, the vehicle offers visceral chills simply driving around town. Yes, it was imagined for racing domination, but the Project 8’s joys are certainly not limited to the circuit. Given its XE footprint, it’s already a capable daily driver (if the 11.6 mpg we averaged can be considered “capable”). Rear legroom is more than comfortable for anyone under 6’2”, trunk space is cavernous and if everything is dialed down to Comfort the XE SV offers every convenience of the A4/C-Class/3- and 4-Series segment.

With a price tag of $190,000, the singularly aggressive XE SV Project 8 is clearly worth the cost of admission.