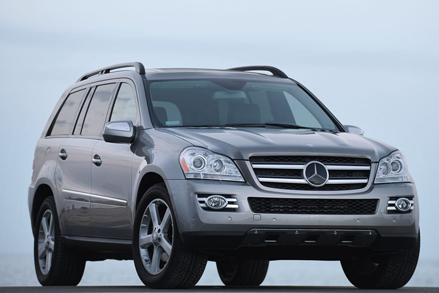 Mercedes-Benz is an old hand at diesel-powered cars—the oldest, in fact—with an unbroken lineage of oil-burners dating back to the 260D sedan of 1936. They were noisy, they were smelly, and they were slow—and that’s how their owners liked them. The 2009 GL320 Bluetec ($59,075) is none of those things, and that’s why we like it. Make no mistake, the gasoline-powered GL450 ($60,075) and GL550 ($82,175) are exceptionally fine performers: sumptuous, unwaveringly capable seven-passenger sport-utility vehicles. But the new Bluetec clean-diesel model may be the real charmer of the range, offering a terrific balance of lively response, prodigious pulling power, and unexpected frugality (20 to 30percent better fuel economy than its gasoline-powered siblings, and a cruising range of more than 600 miles).

The GL320 Bluetec features a 3.0-liter 24-valve turbocharged diesel V-6. Matched to a slick seven-speed automatic transmission, the engine churns out 210 horsepower and a rousing 398 foot-pounds of torque (more torque than the top-dog GL550, actually, and more than enough to launch the GL’s 5300 pounds with verve). The new model replaces last year’s GL320 CDI; apart from the catchier name, the real news here is the Bluetec’s remarkable cleanliness. With direct fuel injection and a highly advanced multistage exhaust system that scrubs soot and hydrocarbons from discharged engine gasses, the Bluetec V-6 produces tailpipe emissions as clean as those from a gasoline engine—clean enough to meet air-quality standards in all 50 states.

During our week with the GL320 Bluetec, what was perhaps most striking about the big Benz (apart from the fuel-gauge needle’s stubborn reluctance to budge) was the cabin’s unexpected solitude. Old-timey diesel-engine clatter rises under only the heaviest application of the throttle (and even then, only mutedly), and at 80 mph on the interstate, the Bluetec GL wafts along with S-class-like composure and tranquility. Acceleration is vigorous, from a standstill and during passing maneuvers at highway speed, and the GL320 will tow an impressive 7500 pounds, as much as the GL550.

Historically, fans of diesel-powered Mercedes-Benzes have appreciated these vehicles as much for their defiantly iconoclastic (even occasionally antisocial) personalities as for their more lovable traits: efficiency, durability, and grunt. But the GL320 Bluetec refuses to embrace Old Diesel’s notorious discourtesy. It’s an urbane, thoroughly modern piece, and an admirably good citizen. It holds true to diesel engines’ traditional virtues but summarily renounces their old-fashioned bad behavior. (www.mbusa.com)