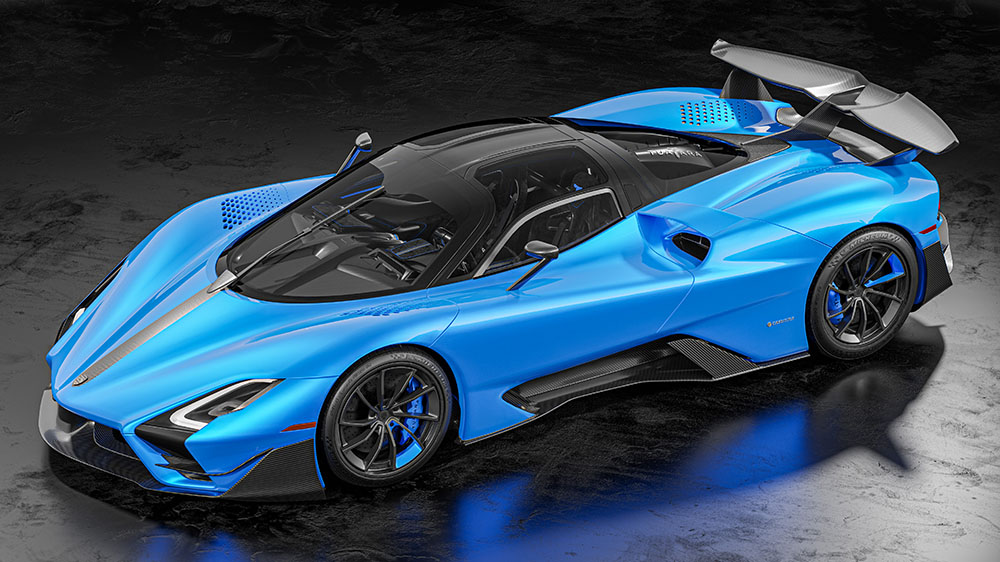 The fighter jet-like SSC Tuatara may have recently become the world’s fastest production car, but its maker still saw room for improvement.

The Richland, Washington-based performance marque has just announced two variants of its record-setting hypercar, both of which are even more extreme than the 1,750 hp vehicle they’re based on. One doubles down on downforce, while the other, a track-only beast, adds an additional 450 horses to the mix.

The first of the new Tuataras is the track-focused Striker. The hypercar, which is still street-legal, has been fitted with a dramatic aero package, which consists of a large frontal splitter, frontal dive plain, directionally vaned side rockers, vertical stabilizer, augmented diffuser, a high-downforce fixed wing and an active rear wing. The splitter, dive plane and side rockers combine to balance out the downforce, with 45.4 percent applied to the front and 54.6 percent to the back. Thanks to these changes the speed machine can produce 1,100 pounds of downforce at 160 mph, three times more than before.

Up next, is the track-only Aggressor. Whereas the Striker is powered by the Tuatara’s stock twin-turbo V-8, this variant has been fitted with upgraded mill that’s capable of producing a stunning 2,200 hp. It also features the Striker’s aero package—but that’s not all. Because it’s not street-legal, SSC says you’ll be able to customize the hypercar to your heart’s content, including, presumably, modifications that would not be allowed on a road car, though it is not clear what those might be.

SSC has yet to announced performance numbers for either of the cars, aside from downforce figures, but we expect they’ll be special. Earlier this year, the Tuatara became the world’s fastest production car after it averaged 282.9 mph across two runs at the Kennedy Space Center’s Johnny Bohmer Proving Grounds in Merritt Island, Fla. That mark bested the 277.87 mph benchmark set by the Koenigsegg Agera RS in 2017.

As you might expect, the high-performance Tuatara variants will be limited. SSC North America plans to build 100 examples of the standard version and the Striker combined, as well as an additional 10 of the Aggressor. Pricing hasn’t been announced, but the meat and potatoes Tuatara starts at $1.6 million, so we’d expect it to be even higher than that. World-record speed comes at a price, after all.