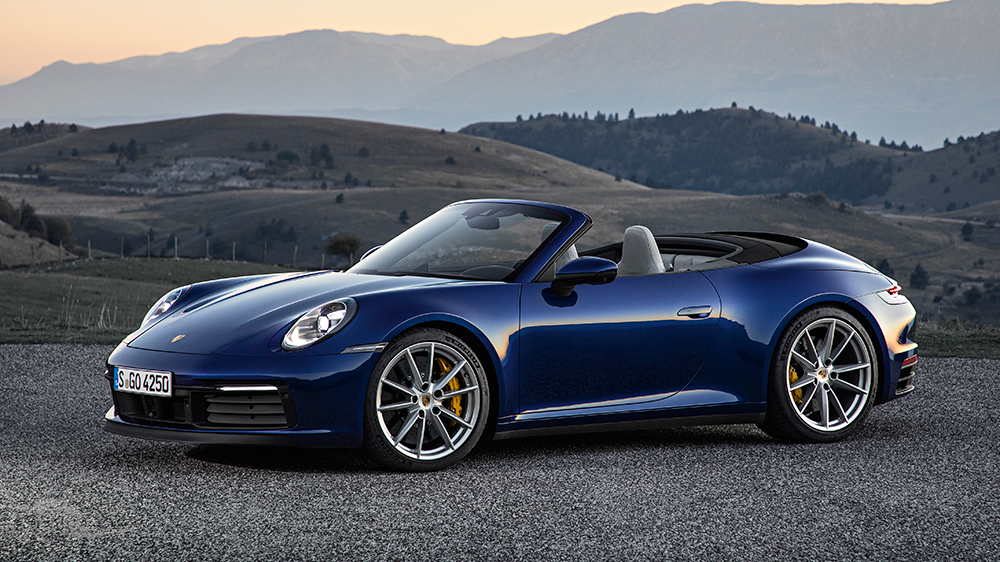 “I love this front fender line,” says August Achleitner, Porsche’s vice president of the 911 model line, running his hand over a 911 Carrera 4S Cabriolet at the Geneva Motor Show. “It’s so much more muscular compared to its predecessor. It gives it a really sporty feel. I also love the shape of the headlamp, because it’s round and pure, more like the 911s of the ’70s.”

The launch of the 911 Carrera 4S Cabriolet is a bittersweet one for Achleitner, who has been with Porsche for decades, as it will be his last before his retirement. “I’m so very proud of what we were able to accomplish here,” he says gesturing to the handsome cabrio. The vast list of enhancements seems never-ending, though a few facts and figures stick out more than others.

It’s wider than before, with comely but sizable hindquarters, giving it a more powerful stance. “A lot of the body design is coming from the larger rear wheels, which we now offer up to 21-inches,” Achleitner explains. “Beyond the rim, the whole wheel is one class bigger, which impacts the shape and the styling of the rear. There’s not a ton of space left around the wheel.” Indeed, the hump above the flat-six turbocharged engine is larger than the 991s, but it’s got a nice flow that makes it cohesive.

The 911 Carrera S and the 4S Cabriolet were developed in concert, which meant Porsche is able to offer the aluminum sport chassis for the drop-top for the first time. “That chassis sits 20 millimeters lower and we’ve brought new damper technology, both dramatically help with handling characteristics,” he says. The improved dampers can now work in conjunction with the rear wing to impart a more balanced feel when driving. “Before, we could only change that relationship in one position—the wing’s lowest—but now it can happen in live time,” he says. That variability of the rear spoiler is also new. “We would’ve had to have changed a lot of mechanical elements to get the same effect before, but now we’re manipulating it with only software,” Achleitner says.

The 3.0-liter engine in the Carrera 4S makes 443 horsepower and 390 pound-feet of torque, an uptick from the prior model by 23 ponies, and the shuffle to 60 sees 0.4 seconds shaved off, dropping to 3.6 seconds, thanks to the all-wheel drive. With the Sport Chrono Package, another 0.2 seconds fade away, leaving you with an impressive 3.4 second sprint.

While it’s 154 pounds heavier than the hardtop, the convertible is a blast to drive. “Firing off through the alps with the sport exhaust ringing in your ears,” Achleitner smiles. “That is driving perfection.”