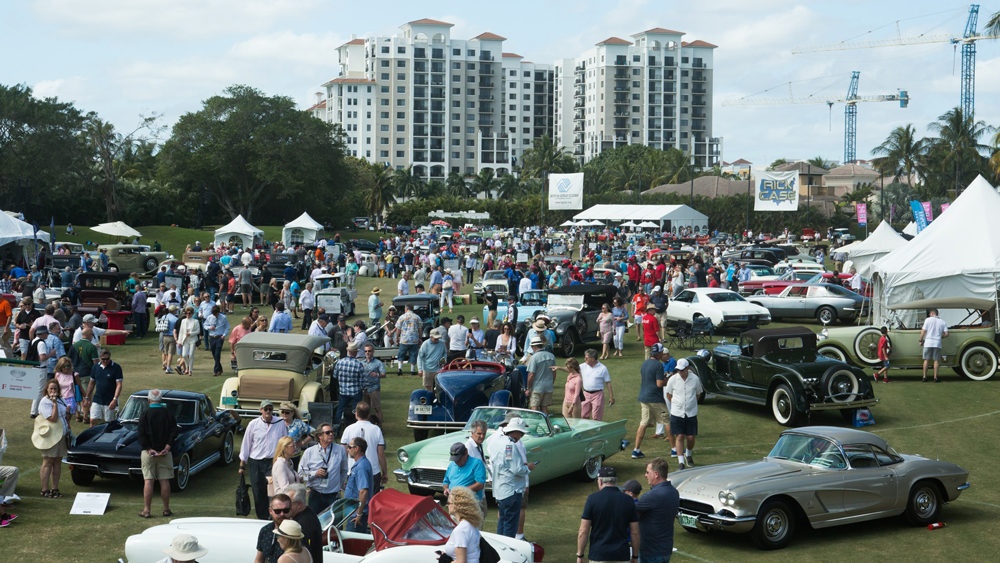 Photo by Cotography, courtesy of the Boca Raton Concours d'Elegance.

Car-show goers are finally back in the concours saddle after being cooped up for the duration of 2020 and much of 2021. The first quarter of this year brings some crisp sunshine and plenty of great machines to the tip of Florida for the 15th annual Boca Raton Concours d’Elegance on Sunday, February 27. Attracting attention will be more than 200 cars (150 of which will be judged) and 50 motorcycles.

According to Russell Glace, operations chairman of the concours for the past 14 years, the result of the pandemic actually helped the selection process. “It brought us better cars and even more serious collectors,” says Glace. “Not having a 2021 concours meant there was more time to fine-tune restorations, with an eagerness to bring the best cars out onto the show field for 2022.”

Rita Case, the concours co-chair and CEO of Rick Case Automotive Group, puts those cars in perspective when she explains the underlying purpose of the Boca Raton event. “Bringing a nationally recognized Concours d’Elegance to South Florida, which benefits the Boys & Girls Clubs of Broward County, was a goal shared with my late husband, Rick Case. I’m excited that we have achieved this recognition and raised more charity funds than any other Concours to date.” Notably, 100 percent of the proceeds generated go to the region’s Boys & Girls Clubs, which support approximately 12,500 youth.

While about half the automobile entries have been rolled over from last year’s cancelled event, 23 vehicles will be previously unseen jewels making their concours debut. Twenty-four classes (six display and 18 judged) comprise the show’s field, with Pre-War Chrysler and Imperial, Coach Built as the Marque of the Year category. Postwar Chryslers and Imperials will also populate the field.

The 1967 Corvette Competition L88 race car that will be on the show lawn.  Photo: Courtesy of the Boca Raton Concours d'Elegance.

NASCAR champion Jeff Gordon will be on hand to announce the Corvette class.  Photo by Brian Gomsak, courtesy of the Boca Raton Concours d'Elegance.

Other classes cut a wide swath across categories, from “Springfield” Rolls-Royce to Jaguar E-Type, the latter being a model which celebrated its 60th anniversary in 2021. Four examples from the first year (1961) will set the stage for E-Type iterations spanning 1963 to the end of the model line in 1974. A display class for Tuner Cars will appeal to the modern-car crowd, and the 30 under 30 category features as many cars displayed by their under-30-year-old owners.

Youth from the Boys & Girls Clubs of Broward County at a previous edition of the concours.  Photo by Clay Wieland Photography, courtesy of the Boca Raton Concours d'Elegance.

The concours weekend kicks off with a private welcome reception on Friday, February 25, followed by the next evening’s Grand Gala Dinner that includes a live auction and a performance by comedian Howie Mandel.