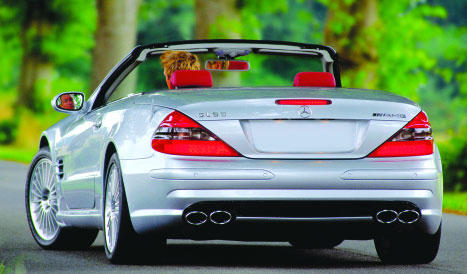 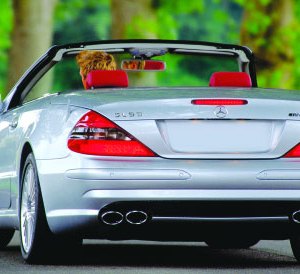 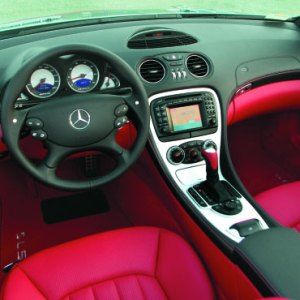 While all great cars have at least one party trick, the Mercedes-Benz SL55 has three. Trick number one: the burble. Nothing stirs a car enthusiast’s soul like the barrel-chested burble of a properly sorted V-8. It’s a mechanical rumble that projects the promise of pure power. For more than 40 years, Mercedes has built some of the world’s most potent V-8 engines, but they have always been engineered for refinement. A Mercedes-Benz never burbled—until now.

The $113,915 SL55 is a reluctant burbler. Baby the gas pedal, and the car is as demure as a standard SL500. Plant your right foot, give those 493 horses a good kick in the sides, and the SL55 burbles like a ’60s muscle car on steroids. Rousting the beast requires a moment’s patience. Even Mercedes’ fly-by-wire electronic throttle cannot eliminate the slight delay between the initial accelerator input and the glorious moment when the car’s kompressors get up to speed.

Coast through town, then violently floor it. The burble erupts from the SL55’s engine bay, prompting pedestrians to move as if poked, and car nuts to do double takes. As quickly as you can, remove your foot from the gas before you segue into the SL55’s next trick, and whatever solid objects lie in your path.

Party trick number two: speed. Again, the über-roadster exhibits a multiple-personality disorder. Exercise restraint, and the SL55 responds with civility. Slap the gas pedal into the carpet, and objects in your rearview mirror simply disappear. The 6-speed box kicks down a couple of cogs, the powerplant bellows like a wounded grizzly, and the thing just gets up and goes.

The ferocity of an SL55 at full charge beggars belief. Standstill to

60 mph takes 4.7 seconds. The searingly quick Ferrari 360 Modena just beats the SL55 to 60 mph, but the torque-tastic German waves good-bye to the Italian in any other situation. Ferrari’s Modena runs out of puff at 183 mph, while Mercedes’ coupe steams on to over 200 mph—with style.

This leads to party trick number three: glamour. Mercedes’ designers have honed the venerable SL’s classic curves into a graceful yet athletic shape.

The SL55’s lower stance, fatter rubber, and more sharply creased bodywork add an entirely welcome dose of testosterone. Unfortunately, the AMG interior is a less successful modification. The aluminum inserts and pseudo-suede surrounding the speedometer look cheap, and the white-on-gray dials impress only at night. The interior simply does not do enough to distinguish the SL55 from the stock SL.

Of course, such nitpicking is a bit like criticizing supermodel Giselle Bundchen for wearing horizontal stripes. The real question is whether beauty itself should be considered a party trick. It should when you can change from purposeful hardtop to sleek boulevardier in 16 seconds. Panels lift, flip, turn, retract, and disappear in a perfectly coordinated mechanical ballet. I know, all SLs do it. But the SL55’s transformation is even more spectacular. For one thing, the car’s appearance morphs from mean to lethal. For another, occupants receive an unrestricted earful of the 5.5-liter, 24-valve V-8’s burble, snarl, and roar.

There you have it: three things to do with your SL55 to amaze and amuse yourself and your friends.