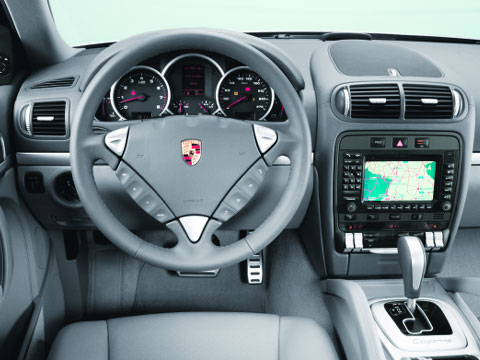 If the Porsche Cayenne Turbo did not have a 450-hp engine, if it did not possess a 165-mph top speed, and if it could not outrun every SUV and most sports cars on the planet, it would still be the finest SUV ever made. That it does do all of these things also makes it a Porsche.

Paradoxically, much of the attention given to the Cayenne has focused on what it is not—a sports car with its engine in the rear—rather than what it is—a remarkably refined yet rugged automobile. The Cayenne is the only SUV on the market with a 6-speed automatic transmission.

No less significant is its planetary transfer case, which directs 38 percent of the torque to the front wheels and 62 percent to the rear to produce a sports car feel to the driving experience. (By way of contrast, torque on the Volkswagen Touareg, which shares the Cayenne’s platform, is divided equally between the front and rear wheels.)

The Cayenne Turbo also carries the most advanced suspension on the market and computer-controlled shock absorbers (optional on the Cayenne S). When the driver changes ride selection from “comfort” to “normal” or “sport,” an electric current travels through the shocks’ metallized fluid to increase or reduce viscosity.

The Cayenne’s ground clearance adjusts to accommodate a variety of situations. Traveling at 130 mph automatically lowers the chassis to the aptly named “autobahn” level of 7.1 inches. The off-road settings vary from 9.6 inches to 10.8 inches, but traveling at more than 50 mph automatically lowers the car to the “normal” setting of 8.5 inches. “The system is designed to prevent people from doing silly things,” says Chris Gilman, Cayenne project manager for Porsche Cars North America.

Both the Turbo and the S can climb a 100 percent grade with ease, while the Cayenne’s Tiptronic hill holder feature prevents either model from rolling backward, with no action required of the driver. The same technology enables the Cayenne to descend a similarly steep grade without the driver’s having to even tap the brakes.

Some critics have wondered why the German carmaker has equipped the Cayenne with so much off-road technology when so few owners are likely to subject a finely crafted $90,000 vehicle to the rigors of the unpaved wild. Again, the company did so because it is Porsche.

By now everyone has heard the mutterings from some Porschephiles that the Cayenne is bound to become a soccer mom’s car. Be that as it may, if my wife were driving a carload of kids to a soccer game, I would want her to be driving a Cayenne.