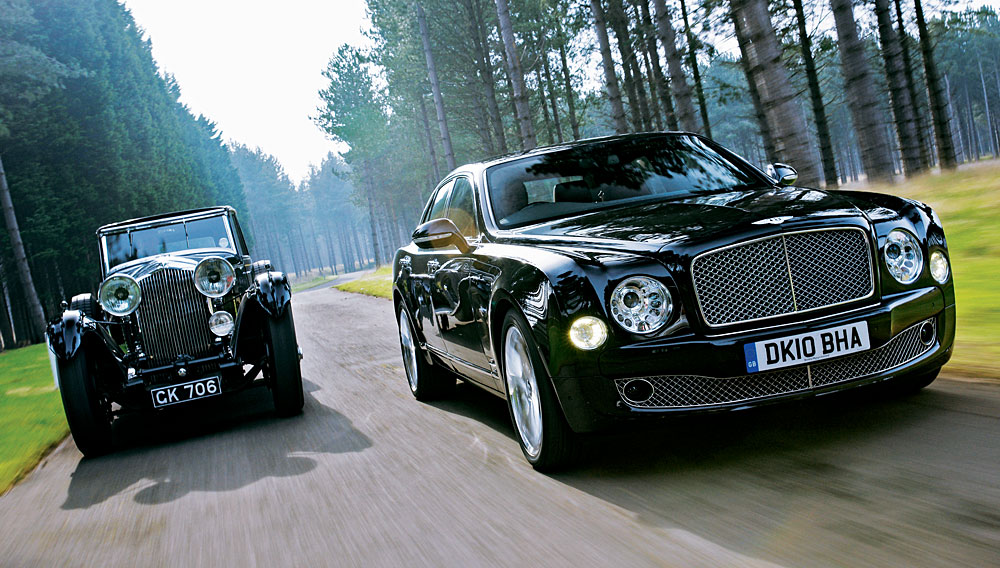 During the formative decades of the luxury motorcar, oversize was a virtue. Girth was good, and bigger was even better. One of the outward signs of a driver’s financial success was automotive excess. A Bugatti Royale weighed more and stretched farther than today’s Hummers and dually trucks. Vehicles bearing the badges of Cadillac, Delahaye, Lincoln, Lanchester, Packard, and Minerva also pushed the limits of size, comfort, and opulence.

Yet only three of these distinguished marques still exist today, and some other survivors of the luxury car’s golden age continue to contend with shifting social and political attitudes. The Daimler AG–owned Maybach, reintroduced in 2002 to compete with the similarly sized Rolls-Royce Phantom in the heavyweight-sedan division, has yet to attract the loyal following the marque enjoyed during its heyday in the 1930s. Rolls-Royce, for its part, has responded to the current penchant for more modest cars by expanding its lineup beyond the coachlike Phantom to include the somewhat sportier Drophead Coupé and the slimmer, lither, and lower-profile Ghost.

One esteemed carmaker, however, is flouting this trend. In introducing the 2011 Mulsanne, 90-year-old Bentley Motors makes absolutely no apologies for the new sedan’s extreme measurements, noticeable appetite, and unblushing avoirdupois. The decision to produce a large four-door may seem incongruous given that, in 2003, the directors of Volkswagen Group agreed to phase out the similarly weighty Arnage. At the time, lighter, more responsive, and certainly more profitable Continental GTs and Flying Spurs were attracting a new generation of Bentley buyers; building another motoring mastodon made about as much business sense as developing a new V-16 Edsel.

“After Azure and Brooklands, there simply were no plans to continue the Arnage range,” says Dr. Franz-Josef Paefgen, chairman and CEO of Bentley Motors. Seated on a park bench on the grounds of Floors Castle in the Lowlands of Scotland, he explains that the Arnage Final Series was intended to be the model’s 150-edition epitaph. “Then the economy started getting better,” he says, referring to the record profits and unit sales that Bentley Motors experienced in 2007. “We were talking to customers and knew that 10 percent of our sales were of big Bentleys, and that the percentage had barely changed over the years. So a decision was made, and we began the three-year development of Mulsanne.”

Named for the fastest, scariest turn at the end of the 3.7-mile straight on the 24 Hours of Le Mans racing circuit, the Mulsanne is one of the quickest, most powerful ultraluxury four-doors ever conceived. Its 6.75-liter pushrod V-8—first assembled in 1960—may seem antiquated and underpowered by today’s engineering standards, but this venerable design achieves 505 hp and an ungentlemanly 752 ft lbs of torque with the aid of a pair of ordinary turbochargers. Spurning all limits, the sedan rushes to a top speed of more than 180 mph and ekes out 16 mpg while cruising. The Mulsanne’s performance is as immoderate as its base price of $285,000—a figure that does not include monogrammed tread plates, marquetry on cocktail-cabinet doors, or license and delivery fees.

Paefgen acknowledges being the driving force behind the new Mulsanne—a name used previously for the flagship Bentleys built from 1980 to 1992. “I have always loved these big cars,” he says. “From the first day I saw one, I recognized that this was a different form of motoring. In maturity, you learn to appreciate refinement. The handling of a big car is solid and has security. It’s like a big airplane versus a small airplane. It gives you a feeling of confidence.”

Bentley’s boss, who drives a 2010 Brooklands and owns a 1950s Bentley S1, accepts the apparent folly of letting this mammoth loose on an automotive market that is currently demanding lighter, less conspicuous vehicles. “It reminds me of driving an old Cadillac with an American V-8, the old big-block engine that had fantastic torque but was incredibly quiet,” he says. “In a way it is an old-fashioned car, but it comes together with the latest of technology.”

Some of this technology is even green, by Bentley standards. Thanks to the use of aluminum and composite parts in its construction, the chunky Mulsanne is 15 percent more fuel-efficient and emits 15 percent less carbon dioxide than the old Arnage. Moreover, by 2012, the Mulsanne—along with every other vehicle in the Bentley lineup—will adopt the eco-friendly design parameters of Bentley’s new Continental Supersports, a thoroughly lightened, largely recyclable coupe that runs on biofuel.

Despite these 21st-century concessions, the Mulsanne still conforms to each of the tenets established by founder W.O. Bentley in 1919. He insisted that a Bentley begins where others leave off, and that each car is the opposite of mass production. Start with the best, he told his employees, and make it better.

From an aesthetic standpoint, the Mulsanne’s lines are pedigreed, well-balanced, and nicely proportioned. The car is cast in the authentic mold of all big Bentleys and incorporates some obvious but wise styling cues from the old Arnage and new Continentals. The sedan’s long hood flows beautifully through well-styled lines that culminate in its finely rounded derriere. Its designers have eschewed the superfluous bling of the Rolls-Royce Phantom while skirting the porridge-like blandness of the Maybach. Only the traditional steel-mesh grille—an abrupt contrast to the gently sloped nose of the Continental GT—strikes an awkward note. Of course, not all observers will admire the appearance of the Mulsanne’s xenon headlights, whose 9-inch bowls, ringed by a series of perforations, resemble a pair of Gatling gun muzzles.

The interior, however, perfectly exemplifies the notion that a Bentley is the opposite of mass production. The choice and quality of materials and the artistic placement of the brightwork reveal superb handcraftsmanship. Each piece and part, seen or unseen, reflects skills developed over generations, flawless attention to detail, and the passion for excellence that assembling a single vehicle over the course of nine weeks requires. Craftsmen spend 10 hours polishing by hand each piece of metal detailing and five weeks transforming oak, cherry, and walnut root balls into mirror-matched leaves of veneer. Seventeen handpicked bull hides from herds in cooler climates (where a lack of insects minimizes the number of blemishes) embellish every interior.

The level of artistry achieved by the master craftsmen at Bentley can be envied but not easily emulated. These individuals, like all great artists, introduce subtle signature touches to the Mulsanne that observant owners will appreciate. The inverted speedometer and tachometer needles, for example, start from the two o’clock position in homage to the first racing Bentleys, and the crystal-topped dashboard knobs glow crimson—an allusion to the now-defunct dashboard cigarette lighters that showed red when depressed.

Still—though such amenities are important—for W.O. Bentley, the driving experience was all. “The thrill of effortless acceleration in a refined motorcar,” he once observed, “is intoxicating.” Yet one might not expect the Mulsanne’s 50-?year-old engine to make one giddy. After all, for an 18-foot-long, 5,700-pound Bentley, any serious movement calls for a small mechanical miracle. Fortunately this well-seasoned powerplant has been updated significantly since its inception. Its modern variable displacement system, for example, manages its eight cylinders until only four propel the car at cruising speed, and the variable cam phasing lowers the torque threshold. But its zero-to-60-mph time of 5.1 seconds and top speed of 184 mph tell only part of the performance story.

Headquarters for our test-drive of the Mulsanne is Archerfield House, where Edward I and his English archers encamped during the English invasion in 1298. Visitors to the storied estate have included Mary Queen of Scots and Winston Churchill.

As we take the Mulsanne through its paces, we note that the 8-speed ZF automatic shifts as if no ratios were moving, let alone changing. A sophisticated series of performance modes adjusts the air suspension and steering. Bentley mode is firm but friendly; Sport yields a stiffer yet civilized ride; and Comfort cushions the occupants so sublimely that even a speed bump would fail to rouse one’s dowager aunt. If none of these preset options appeals, Custom mode allows one to customize the suspension and steering settings. Whatever one’s preference, the Mulsanne accomplishes the mechanical transitions between modes in the same way the perfect butler carries out his duties: quietly and effectively.

The variable displacement system handles its task with similar discretion and finesse. Although half the cylinders cut in and out between acceleration and cruise, the driver remains insulated from this process. The brakes, even when stomped on at speed, ease confidently and securely into operation. When we boot up the Mulsanne’s considerable torque for a multiple-vehicle pass, even on the mud-slicked back lanes of East Lothian, the enormous sedan’s handling remains light, short, and narrow—just like a sports car.

As we pull back into the deeply graveled forecourt of Archerfield, we encounter extremes of ancient and modern motoring: a medley of Windsor Blue-, Glacier-, and Silver Tempest-hued Mulsannes accompanied by a haughty, Bible-black 1930 Bentley 8-Liter. Bodied by Mulliner, this straight six (purchased three years ago and restored by the company at a cost of $1 million) was the second of only 100 cars made, as well as founder W.O. Bentley’s daily driver. Although 80 years old, the three-ton 8-Liter will still run out at 100 mph, says Ray Steele, the vehicle’s handler. “This is not a car, but a sense of occasion,” he observes. “It is heavy, but it is powered to handle that weight. In a light car, you bounce around. Hit this, and you bounce off.”

This admirable memento of the marque’s past makes a fitting mascot to the launch of the Mulsanne. Yet we wonder if, given today’s political and social climate, the biggest Bentley ever built—which measures six inches longer than the 8-Liter—will inspire the same kind of admiration among potential owners. Or will these buyers bounce off?

The company’s representatives have a ready answer for us. Bentley has set a production target of between 700 and 800 Mulsannes per year, and the car is already sold out through 2012.