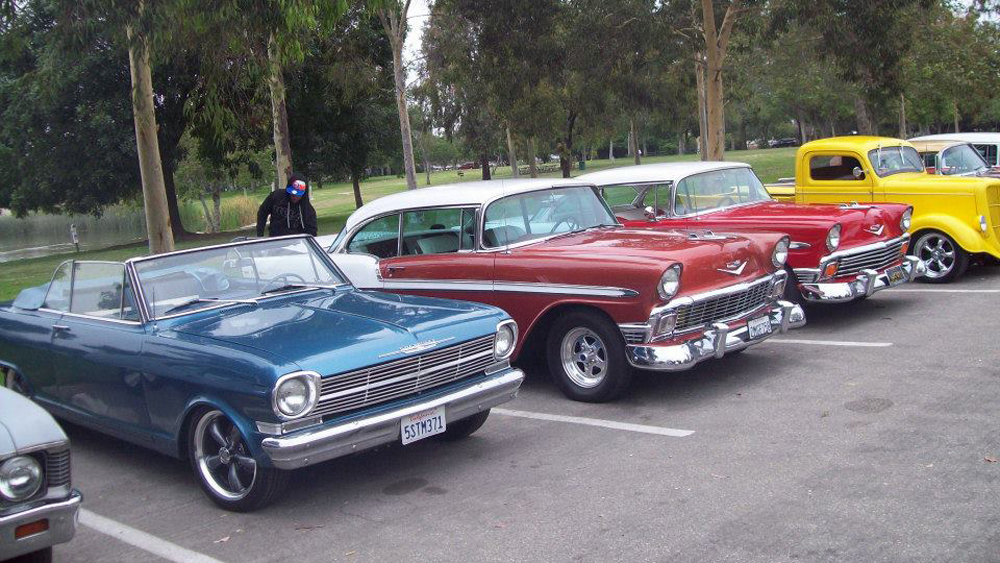 Car culture burns bright in Los Angeles, where the arterial network of roadways links an endless sprawl of diverse neighborhoods. As the automobile industry emerged from the oil crunch and malaise of the 1970s, cars started becoming cool again, forming a stronger-than-ever force in urban circles. At South LA’s Fremont High School, shop teacher Bruce Gray rode that wave and became a lynchpin for impressionable kids who had motor oil coursing through their veins.

“There were so many people who attended the automotive technology class,” recalls Mark Thomas, who graduated from Fremont in 1984. “Year after year, more students attended that class and graduated, but still kept in touch.” A sort of critical social mass, it seemed, was inevitable. “It turned into, ‘We’re going to all get together,” he says, in spite of the forces that tear individuals apart.

The motoring connection forged a universal sense of community and everything that comes with it; witness familiar teen automotive-culture tropes established across varying demographics—everything from American Graffiti to Boyz n the Hood. In this case, Gray and his students transcended high school, evolving into a social network that started at his nearby shop, A & G Gray Auto Repair in South Central LA, and extended well beyond graduation.

Founded more than three decades ago, the club now comprises about 30 members but is continuing to grow with a new generation of participants.  Photo: Courtesy of the Black Classics Car Club.

“We just had a fondness for the cars and for helping each other,” recalls Fred Steger, who was one of Gray’s students. Following years of unstructured meet-ups and drives, the Black Classics Car Club was co-founded in 1986 by Steger and Gray. “The next thing you know, it started growing and growing,” Steger says.

Thomas, who serves as the club’s historian, studied engineering in undergraduate and graduate school following his time at Fremont, eventually moving to Detroit to work for General Motors before returning to LA five years later. It was back home where he reconnected with his old crew, whose automotive interests largely focused on Chevrolet models like so-called Tri Five Chevys, the evocative coupes, sedans and wagons manufactured in the years 1955, 1956 and 1957. Also well represented in the group of approximately 30 members are Camaros, Novas, Chevelles and pickup trucks. Ironically, Thomas’s exposure to GM didn’t dampen his passion for the Blue Oval: in addition to a Chevy Nova and 3100 truck, he also enjoys owning a 1967 Ford Mustang.

Members were originally drawn to stylish cars that were easy to work on and customize. And within the club emerged nearly every area of expertise that involved building, rebuilding or modifying the relatively straightforward classic cars from the pre-computerized era. “We have one guy who’s a major mechanic and can fix anything; we have a guy who’s really good at fabricating and sheet metal; we have an electrical guy; we have another one who had a radio shop, and another who works at a tire shop,” says Thomas. “It ended up being much cheaper because we didn’t have to take our cars to a shop. Someone in our club does everything.” Steger adds that the only thing not covered by club members is chrome and interior upholstery.

A member’s 1966 Shelby GT350 displayed during one of the club’s monthly gatherings.  Photo: Courtesy of the Black Classics Car Club.

The Black Classics Car Club has evolved since the days when Run-D.M.C. and Aerosmith topped the charts. In high school, the kids put their hot-rodding handiwork to the test by street racing. Nowadays, the members just meet up on the third Sunday of every month (as many of them work on Saturdays). There are also road trips, the calendar for which is planned out months in advance with destinations including Palm Springs, San Diego and Utah’s Zion National Park. And every February, the group votes on its officers— though there seems to be an “if it ain’t broke, don’t fix it” approach to the arrangement, as Steger has continuously served as president since the club’s formation over three decades ago.

The club is also more focused than ever on giving back to the community, using its members and their meticulously cared-for vehicles as an opportunity to help those around them. From toy drives and free meals to donations given to convalescent homes, members of the Black Classics Car Club have leveraged their passion into a boon for those around them. And road rallies have strengthened the group’s resiliency throughout some trying times, bringing as many as 52 cars together for these journeys.

The club convenes on the third Sunday of every month.  Photo: Courtesy of the Black Classics Car Club.

The annual trip to Laughlin is referred to as the club’s “super bowl,” and it’s considered the long-distance gauntlet through which all member cars must pass in order to be worthy of admittance. If one suffers a breakdown, the group will work together to find a solution, even if it requires the last-ditch effort of towing the vehicle to a friend’s shop in Bullhead City, Ariz. Such is the solidarity and camaraderie on hand.

Members are usually drawn to stylish cars that are easy to work on and customize.  Photo: Courtesy of the Black Classics Car Club.

With an eye towards keeping the organization relevant for future generations, the founders have expanded the age of the cars to 1987, as some of the mid-century classics owned by old timers are usually no longer attainable for young newcomers to the hobby. “We brought it back so we can get younger folks who can afford Malibus, Grand Nationals and cars like that,” says Steger. He says that one unfortunate byproduct of modern times is the demise of classes that originally brought this group together.

“There are no more shop classes were kids could use their hands; they’re not there anymore,” says Steger. Yet, on the other hand, Thomas is bullish on what lies ahead. “Multiple clubs are doing events with each other now, and that’s making it even better for the community because we have a chance to make a bigger impact collectively. The future is bright.”