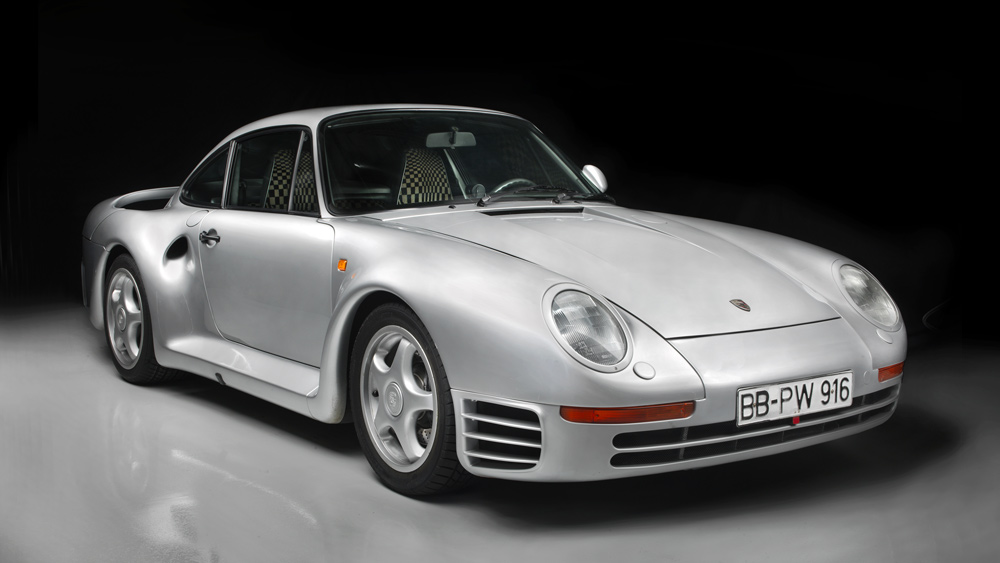 There are cars, and then there are cars. Of all the 1980s-era Porsches, the 959 tops the pyramid. As groundbreaking as it was bank-breaking, the 959 pushed limits, and offered a glimpse into the 911’s ultimate future at a time when the rear-engined oddity’s head was on the chopping block. It was a harbinger of advanced engineering that would trickle down to more accessible models, and featured Porsche’s implementation of all-wheel drive and twin-turbocharging, while being the first supercar to crest the 200 mph mark in refined luxury.

Between 1986 and 1988, only 292 examples were made, in addition to 37 prototypes and pre-production models, with an additional eight cobbled together at the factory through 1993 for special customers. But the 959 didn’t just emerge, like Botticelli’s Venus, from a scallop shell in Stuttgart. Like all brilliant automotive designs, it was developed through prototypes, one of which is in the Brumos Collection. Like most 959s, this one is silver, and was a pre-production car gifted by Dr. Wolfgang Porsche to the man who fathered it, Project Chief Engineer Helmuth Bott.

It’s rare to encounter one of these jewels on the road, and so the Brumos Collection’s Inside the 59 video episode titled “Porsche 959 Project” is a five-minute Porsche-gasm that lets viewers see and hear a special example come to life. Bott’s car remains remarkably original, and is regularly driven to maintain it in peak condition.

The 959 was originally designed to compete as a Group B rally car, with homologation requiring 200 units to be manufactured. But that racing series ended abruptly in 1987, with the 959 project well underway. The automobile’s 2.8-liter, twin-turbocharged flat-six engine develops 450 hp. That was well beyond the Porsche 930 Turbo’s output at the time, and double the 911 Carrera’s power.

Like the 1973 Carrera RS, the 959 was offered in Sport and Komfort trim. The model was a “statement” piece and, like some halo cars before it (Ford’s Continental Mk II or BMW’s 507, for instance), cost the automaker far more to make than it could be originally sold for, even priced at $225,000, which was roughly half of its production cost in 1987.

Not only does the museum, which opened to the public again on January 21, take its example to the local roads near Jacksonville, Fla., but the vehicle spends some time running and revving on a four-wheel dyno, a useful tool for data analysis and general maintenance, while exercising the engine and gearbox without traveling an inch.

The seats retain the dizzying black-and-white print on Pasha fabric.  Photo: Courtesy of the Brumos Collection.

The video also lets viewers in on some details ordinarily unseen. Fascinating is that many parts and panels on the car have the notation “V6” either stamped, engraved or written on them, most likely designating the example as the sixth prototype of the 959 to be built. And of course, no Porsche from the past features an interior as outrageous as the ones whose seats were upholstered—like Bott’s 959—in wild Pasha fabric displaying a black-and-white Op Art pattern so outrageously hip that it hurts.