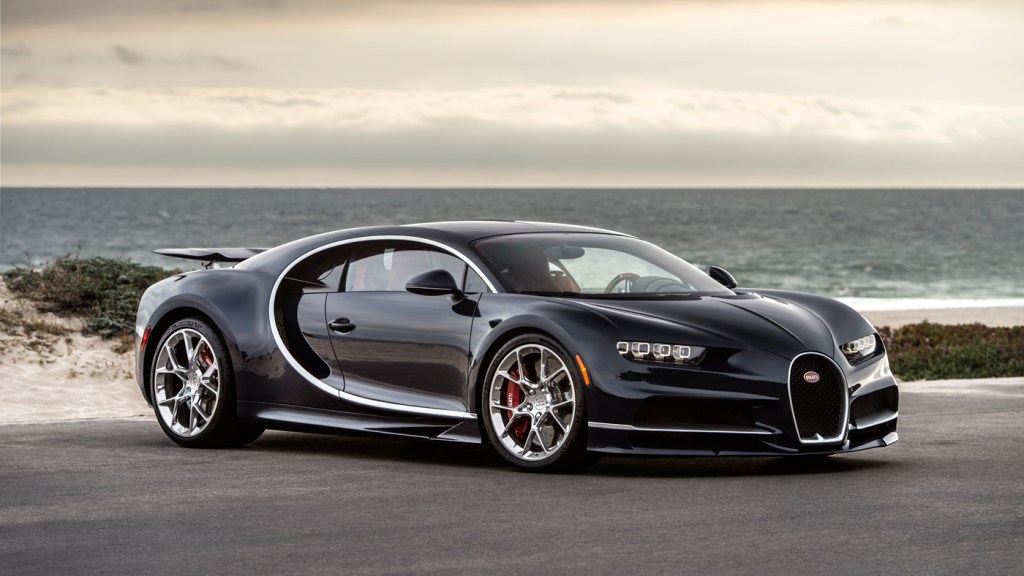 Bugatti has never been shy about breaking rules and raising expectations. That’s why the French marque’s Veyron has, since first emerging from the factory in 2005, been the model by which all other supercars are measured. Bugatti has been present at Robb Report Car of the Year in 2007, 2010, and 2013. Each time, it has redefined automotive excess—exquisitely. The Veyron Gran Sport was such a stellar achievement that our editors and judges named it the Car of the Decade in 2010. But that decade, like its king, is now dead. Long live the new king, the Bugatti Chiron.

First shown at Geneva in March 2016, the Chiron succeeds the Veyron as Bugatti’s grand statement of what is possible. Possessing 1,500 hp and an eye-watering window sticker starting at a smidge less than $3 million, the Chiron deals in numbers that are essentially academic, even for the handful of people who will actually drive—much less own—one. In fact, of the 500 units that Bugatti plans to build, more than half are already spoken for, mostly from buyers of one-or-the-other Veyron variants who have put down substantial deposits to get in line for the mother of all supercars.

We recently attended a small, private showing of the Chiron in Malibu, Calif., to talk with some of the people responsible for its design and to avail ourselves of the opportunity to drive it. Bugatti Director of Design Achim Anscheidt, who plies his trade at the Volkswagen headquarters in Wolfsburg, Germany, addressed our group with an overview of the Chiron’s design brief. Anscheidt elucidated the solutions he and his team arrived at to satisfy not just aesthetic objectives, but technical challenges encountered in the development of the car.

A glimpse of the Pacific Ocean through the interior of the Bugatti Chiron.

Engineering a 1,500 hp supercar is an exponentially complex project compared to a “mere” 500 hp vehicle. The volume of air required to feed a quartet of turbochargers while exhausting the heat generated by the Chiron’s 8-liter W-16 engine are just two hurdles; making the car civilized is another. We’ve driven many vehicles carrying more than 1,000 hp, and most are a terrifying combination of ill-sorted prototype and wishful thinking. Not so the Bugatti. Despite its 1,180 ft lbs of torque and 261 mph top speed (limited for road use; it’s capable of speeds north of 280 mph), the Chiron is as refined as a Bentley, and docile enough that one’s grandmother could drive it.

Certainly, docile enough for us. Accompanied by Bugatti’s test driver (“Trust, but verify,” I imagine him thinking), we started north of Zuma Beach and drove for miles along Pacific Coast Highway, snicking off onto Kanan Road and arcing south along Mulholland Drive, then backtracking north through Encinal Canyon Road to our point of departure. Having driven many Veyrons in various guises, we have a pretty good idea of how that model has incrementally improved over its years of production. But the Chiron dials everything up: more power and torque, handling response that is more immediate and light (with less understeer), and seamless shift transitions from the 7-speed DSG dual-clutch gearbox. The wheels have gotten larger (20-inch and 21-inch in the front and rear, respectively), the tires are markedly improved and longer lasting, and the brakes are bigger since they have more of a beast to stop in its all-wheel-drive tracks.

The Bugatti Chiron has 20-inch front wheels and bigger brakes than the Veyron before it.

While public roads are no place to exploit a car like the Chiron, even a less than 2.5-second sprint from zero to 62 mph is sufficient to impress the most jaded car person. Acid reflux sufferers will be used to the suffocating sensation—in this case, trying to catch one’s breath as all the air in the universe is sucked up by four greedy turbochargers—while the car catapults forward. But its brutal acceleration is just one facet of this capable performer’s personality. It is the ease with which one drives this large GT that makes it different from other supercars. No blistering exhaust note, no spine-rattling suspension, no claustrophobic cabin paneled in surgical steel or cold carbon fiber. Inside, the Chiron is a model of simple luxury, with quilted sport seats and a single shift stalk on a wide center console. A round analog instrument (with digital information displayed as needed) and a compact steering wheel punctuate the driver’s view, while a few elegant metal knobs control climate and ancillaries. And although the Chiron is anything but simple, its designers make it seem so, and that may be the most surprising achievement of all.

It’s hard to imagine a car like this being made today, had not its predecessor been conceived when the year 2000 was looming and Bugatti’s parent company Volkswagen Group was aiming to dominate the supercar world. They did that with the Bugatti Veyron, and having set the bar, it only makes sense that the Chiron should come around to raise it again.