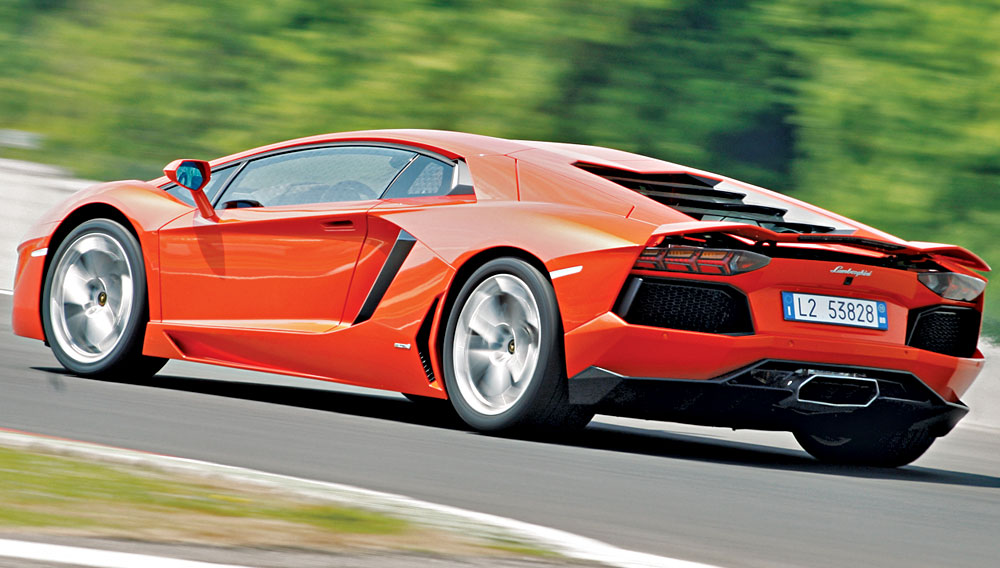 This past March marked the 150th anniversary of the unification of Italy, an occasion that Rome’s citizens and visitors alike celebrated with gusto. In restaurants hung with plump prosciuttos and cloaked in the aroma of white truffles, patrons lifted their glasses of Prosecco to toast the anniversary. On the city’s streets and in shops, vendors offered commemorative souvenirs as diverse as papal postcards and red-green-and-white ashtrays, while museums exhibited and politicians proclaimed the nation’s pride in Giuseppe Garibaldi’s stately achievement.

Well into the second month of festivities, when the party was barely winding down, Automobili Lamborghini joined the soiree, bringing a phalanx of automotive writers to Rome as its guests. The carmaker paid its respects to the republic and availed itself of the occasion to announce its first all-new creation in nearly a decade.

Lamborghini is an apposite example of Italy’s post-unification, postwar prosperity: Newly minted tycoon Fer­ruccio Lamborghini formed the company in 1963, and within a year it produced an automobile—the 350 GT—that bettered the 1964 Ferrari on every count.

Nearly five decades later, on a podium in front of the Westin Excelsior hotel in Rome, near the tangled thicket of tiny Fiat 500s and Smart cars whizzing along the Via Vittorio Veneto, sat a bright orange Lamborghini Aventador LP 700-4, the most formidable bull ever to charge into the supercar stadium.

Supercar is an oft-abused moniker, if one applies the strict, 200 mph criterion for this categorization. While an automobile’s ability to achieve such a velocity on today’s Prius-populated highways might be academic, the technical underpinnings of such prowess also apply to far broader and more practical aspects of a car’s character.

Since relabeling the P400 as the Miura in 1966, Lam­borghini has named its creations after famous fighting bulls or, in the case of the Espada (1968–1978), instruments with which to dispatch them. Aventador is the name of a 20th-century Spanish bull of great renown, but it is also the Spanish word for a wooden fork used for winnowing wheat—that is, separating the grain from the chaff. If there is such a thing as supercar chaff, the Aventador—with a 700 hp V-12, a zero-to-60-mph time of 2.9 seconds, and a top speed of 217 mph—stands apart from it. Lamborghini plans to build 800 examples per year and will begin offering the car in the United States in late summer for $387,000.

When Ferruccio Lamborghini first threw down the gauntlet to rival Enzo Ferrari, he made certain that the automobile bearing his name contained the most sophisticated and powerful V-12 engine of its time. Developed by Giotto Bizzarrini—who no doubt still was smarting in 1963 from his recent and sudden dismissal by Enzo during the mercurial il Commendatore’s purge of Ferrari’s entire management team—the aluminum masterpiece boasted dual overhead cams; Ferrari’s Colombo-designed V-12 had only one per bank of cylinders. Lamborghini used six Weber carburetors; Ferrari used three. Bizzarrini’s original design proved so sound, so reliable, and so adaptable to increased displacement and power output that it has soldiered on and found its way into the most recent Murciélago, though Lamborghini has hugely improved it over the years by applying advances in metallurgy and modern engine management.

However, since the beginning of this century, automobile manufacturers have pursued ever-more efficient engines, mostly in response to governments’ increasingly stringent emissions and fuel-economy standards. Even designers of the highest-performance automobiles have become focused on efficiency. Thus the Aventador’s engine is an all-new 60-degree twin-cam V-12 (known at Lamborghini as the L539 and made entirely in-house) that burns fuel 20 percent more efficiently and more cleanly than the Murciélago’s V-12 while developing greater power and delivering even more blistering performance. The new engine also is more compact and lighter than the Murciélago’s, weighing only 518 pounds. It has four valves per cylinder and displaces 6.5 liters, churning out the aforementioned 700 hp and 509 ft lbs of torque at 5,500 rpm. Like all Lamborghini V-12s, the Aventador’s offers superb low-end torque, while an oversquare bore and stroke take revs up to 8,500 rpm. The accompanying exhaust note is bass and mellifluous and unmistakably a Lamborghini’s.

Although the L539 powerplant enables the Aventador to achieve a terminal velocity of 217 mph, Lamborghini president and CEO Stephan Winkelmann says, “Top speed is not as important as it was before.” Handling and acceleration, he contends, are more important aspects of a supercar’s character.

Most Lamborghinis are equipped with an enormous aluminum cue-ball-tipped stalk that diehards might enjoy finessing through its imposing shift gate. But on the Aventador, this brutal stick-shift- and pedal-operated manual clutch apparatus has been replaced by a kinder, gentler means of laying waste to challengers—and those soft, expensive Pirelli P Zero tires. Lamborghini engineers have developed a robotized 7-speed gearbox called ISR, which utilizes independent shifting rods to actuate shifts that are faster than those of conventional dual-clutch transmissions. Shift times are as quick as 50 milliseconds, which is more than four times faster than the Murciélago’s and 140 percent quicker than those of the excellent E-gear transmission in the Lamborghini Gallardo. The ISR gearbox also is much lighter than the other cars’ transmissions, and it has the compact dimensions of a manual transmission case.

The ISR offers five driving modes: Strada, Sport, Corsa, and two fully automatic modes of Strada and Sport. During our day at the fabled ACI Vallelunga circuit, situated about 20 miles north of Rome, we drove primarily in Corsa mode, though Sport is the most likely choice for real-world street driving. The new gearbox stands as further proof that modern paddle-shift transmissions are superior in every way to their stick-shift counterparts, which seemingly still exist solely to provide tactile involvement for those drivers who must have their hands and feet engaged at all times.

Exploiting the Aventador’s power in a safe, manageable fashion requires that all four wheels—not just the rear ones—do the driving. Instead of using traditional viscous coupling, as the Murciélago’s four-wheel-drive system does, the Aventador’s all-wheel drive employs a lighter Haldex IV differential, which continuously distributes as much as 60 percent of the available torque to the front wheels. With traction delivered to all four corners of the car, the Aventador tracks like a giant slot car. It is easy and undemanding to drive, whether at speed or in less challenging, real-world scenarios. The car’s relatively lightweight (3,475 pounds) and bank-vault build serves as a reminder that big, strong, and powerful need not mean heavy too.

Winkelmann claims the Aven­tador has made a two-generation jump in terms of design and technology. “We want [it] to be the reference for super sports cars,” he says.

The Aventador’s chassis represents a fundamental advancement for supercars, though it is not wholly accurate to call it a chassis. Exploiting composite technology to a degree not previously seen in a series-production automobile, Lamborghini uses carbon-fiber resin transfer molding (RTM) to form a full composite monocoque. While some companies build their exotics with a carbon tub, bonding A-pillars, and a metal roof as separate components, Lamborghini fabricates a complete carbon cage, which confers structural integrity and weight benefits superior to any other construction formula. The monocoque is about 30 percent lighter and 150 percent stronger than a conventional aluminum structure.

Attached to this carbon masterpiece are front and rear aluminum subframes that carry a pushrod suspension straight out of Formula 1. Separating dampers from the double aluminum wishbones improve handling response and feedback while reducing spring stiffness and increasing ride comfort. A hydraulic lift system raises the front end about an inch and a half, to help drivers negotiate diabolical driveways and speed bumps.

A Lamborghini designer does not have it easy. The Miura (1966–1972) and the original Countach (1974–1977), maybe the most beautiful and influential designs of their respective eras, are tough acts to follow. But designer Filippo Perini, director of Centro Stile Lamborghini, has created a body that is as startlingly beautiful today as the remarkable Miura and Countach were in their days. Perini trained as a mechanical engineer, and that schooling clearly has influenced his aesthetic sensibilities. The Aventador sports no gratuitous embellishments; as a form, it is pure, powerful, and precise.

Like a favorite sculpture, the Aventador abounds with details that reward intense observation, whether you peer into an opening, follow a crease, or caress one surface that morphs into another. The form is complex yet coherent and organic, like that of an exotic flower or insect; inspirations for Perini’s design include the X-shaped wing configuration of a bug, which becomes immediately apparent when the car is viewed from above.

While less than 45 inches tall, the Aventador, at nearly 89 inches wide (including mirrors), has a substantial footprint. Lamborghini’s signature scissor doors sweep upward to reveal a spacious interior containing such engaging details as tactile leather, carbon fiber on the doors, and the latest electronic TFT-LCD screen instrumentation.

In discussing Italy’s rich legacy of designers, Perini cites Franco Scaglioni as the most remarkable. Never predictable, Scaglioni designed the earth-shattering Alfa Romeo B.A.T. cars of the 1950s and Ferruccio Lamborghini’s very first car, the 350 GTV prototype. The GTV was so far ahead of its time that Lamborghini hired Carrozzeria Touring to dial back the design for his production 350 GT.

The mid-engined Aventador is as advanced today as its forebear was nearly 50 years ago, representing lessons Lam­borghini learned about materials and aerodynamics from building its Sesto Elemento concept vehicle and limited-edition, $1.5 million Reventón.

At a time when hood emblems are traded among manufacturers like so many marbles, the Aventador stands as a proud and pure expression of Ferruccio Lamborghini’s original mission. It is a genuine supercar that goes blindingly fast in a straight line and around a test circuit. The Aventador also embodies the essence of gran turismo in the spirit of Lamborghini’s first 350 GT, offering great ease and pleasure on drives from Los Angeles to Napa or from Munich to Lake Como.

In a 1964 interview with Sporting Motorist magazine, Ferruccio Lamborghini, Italy’s then-newest automobile manufacturer, said, “It is very simple. In the past, I have bought some of the most famous Gran Turismo cars and in each of these magnificent machines I have found some faults. Too hot. Or uncomfortable. Or not sufficiently fast. Or not perfectly finished. Now I want to make a GT car without faults. Not a technical bomb. Very normal. Very conventional. But a perfect car.”

Like the 350 GT, the Aventador is a true grand-touring automobile of the highest order, and it would doubtless please Ferruccio if he were alive today. Although he might snort with Taurian ferocity because the Aventador is, very definitely, a technical bomb.