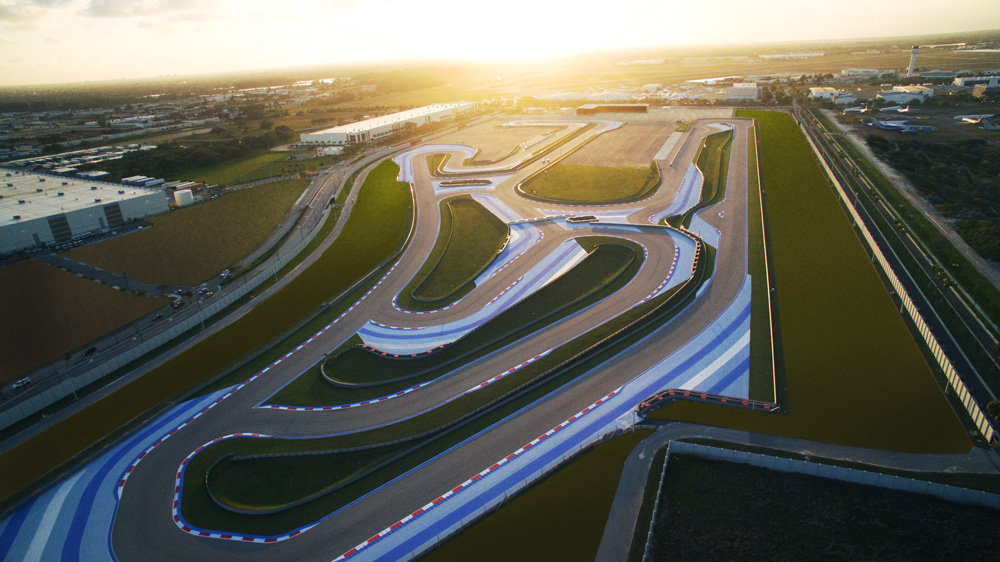 Photo: Courtesy of the Concours Club.

One of the most technologically sophisticated racetracks in the world will soon open in Miami, complete with state-of-the-art vehicle-tracking systems and tons of high-tech safety features. But it also happens to be quite challenging, with no less an authority than Indy 500 champ Hélio Castroneves advising in its design.

But you won’t see Castroneves battling it out there in his Indycar, nor any Formula One, NASCAR, or other pro series machine. This is the Concours Club—a decidedly more genteel proposition than, say, the infield at Indy on Memorial Day weekend. The two-mile private road course, located on the grounds of Miami-Opa Locka Executive Airport and just 20 minutes from Miami Beach, will instead host premium supercars owned by its carefully selected, high-net-worth membership.

Between laps, drivers will be able to enjoy some of the most lavish and well-thought-out accommodations ever provided at a track. Even the food will be something special: The Concours Club just announced that renowned Miami chef Brad Kilgore, owner of the city’s award-winning Alter, Kaido, and Ember restaurants, would be its culinary director.

We recently received an exclusive preview of the venue, which is due to officially debut later this year. During a few moderately aggressive laps with track personnel, it became immediately clear that the Concours Club aims to challenge enthusiasts who like to squeeze the most out of their investments.

“Our philosophy has been to build a really fun track that’s also very technical,” says founder Neil Gehani, a Chicago real estate investor and racer who bucked conventional wisdom about the feasibility of such a venture in Miami. “It has world-class design elements including perfectly drawn, decreasing-radius turns and hidden apexes, but also fast straights. Members are going to have to really work in order to go faster here.”

Tearing it up on one of the track’s straightaways.  Photo: Courtesy of the Concours Club.

Aaron Weiss, the club’s president, pointed out one of his own favorite features: Lighting for night driving that keeps things challenging without compromising safety. “At most tracks, the lighting is grandstand lighting—it’s basically daylight, with no shadows,” notes Weiss. “That’s for television and fans. But the best tracks are the opposite, with darkness in some areas that makes the drivers hunt around to find their way. I love that.”

But the course still throws drivers an assist to help keep them out of the grass. It’s one of the few racetracks in the world to use reflective airport paint to keep the edges illuminated, and there’s lighting above the apex of each turn. “It’s hard to hit the apex when you can’t see it at all,” Weiss mentions.

Set within the grounds of Miami-Opa Locka Executive Airport, the private course is only 20 minutes from Miami Beach.  Photo: Courtesy of the Concours Club.

To further boost safety, the track includes a telemetry system that can track the position of every car and immediately throw up caution alerts if it detects any vehicles that have had an accident or gone into one of the special, impact-absorbing barriers that line the course. The runoff areas feature high-friction surfacing designed to slow the car down significantly, and even the coaching system is designed with safety in mind. Instead of having an instructor inside the car—which can throw off a vehicle’s balance and braking distances, drivers can receive live coaching remotely, as cameras and telemetry data allow instructors to ride along virtually with every lap.

A rendering of the club’s exterior aesthetic, designed by DMAC Architecture.  Photo: Courtesy of the Concours Club.

Gehani definitely raises the bar on the private racetrack model in all aspects. For example, the Concours Club will include a trackside comfort station—designed by DMAC Architecture—that includes a permanently shaded area, refreshments and amenities like helmet-dryers, iPads with updated performance data, seating for friends and family and tablet-based menus for ordering lunch.

But as helpful as the comfort station will be, it’s perhaps the food that promises to compete most closely with the cars for crème-de-la-crème status. Kilgore says he’s programming the menus to be both invigorating for drivers who are involved in grueling conditions on the track, but also satisfying for when they finally hang up their helmets for the day.

“There’s a huge degree of athleticism to what they’re doing, so we’re thinking a bit more along the lines of energy and physical preparation,” Kilgore explains. His cuisine will feature a lot of vegetables and proteins for lunch, followed by full gourmet meals afterwards, in the main restaurant.

Also on hand will be vehicle storage for owners, maintenance and detailing services and plenty of creature comforts designed to make it an attractive hangout for the motorsport minded. Membership will be required to access the track and its facilities—or accompaniment by a member. And once inside, you may actually run into founding member Hélio Castroneves while there. Well, figuratively speaking, of course.