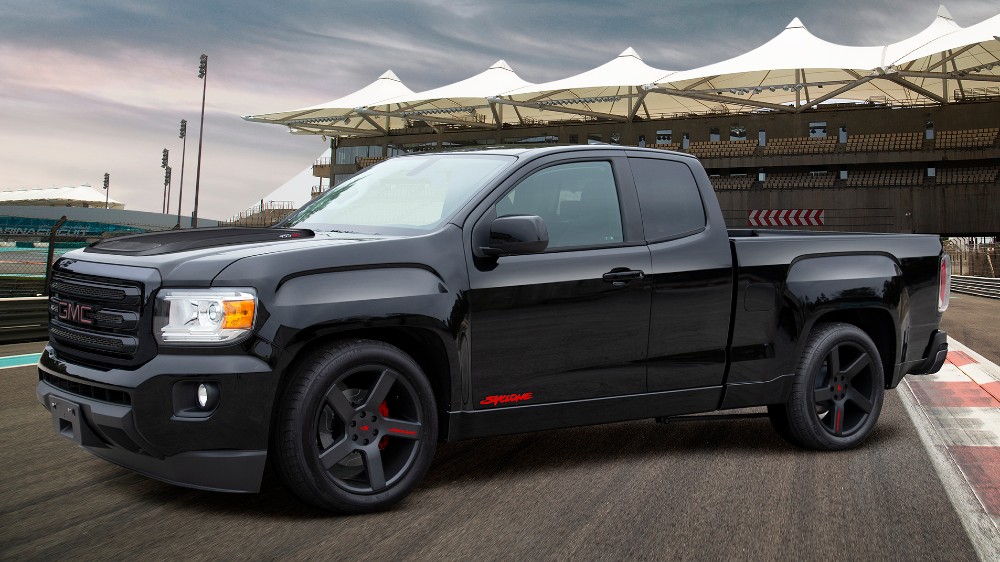 The GMC Syclone was a proper automotive legend in the ’90s, deserving of poster status, hanging in between a Lamborghini Countach and a Ferrari F40. Based on a Sonoma pickup, it boasted a turbocharged 4.3-liter V-6 that was good for 280 horsepower and 350 lb-ft of twist. When the Syclone stormed onto the scene in 1991, it was stupid fast. A 1991 C4 Corvette was putting up a 5.7 second zero to 60 time, and a Ferrari Testarossa did the deed in 5.3 seconds. The Syclone blew everything away with a 4.3 second sprint. Now, the Ferrari-beater is back, in a modern interpretation, thanks to Specialty Vehicle Engineering from New Jersey.

With fewer than 3,000 original Syclones produced, since GM only made it for one year, they’re a rarity. Thus, SVE will only build 100 units, all of which will be based off the two-wheel and four-wheel drive versions of the GMC Canyon. The 2019 Syclone will feature a sport suspension that’ll see the chassis drop two inches up front and five in the rear. It’ll be powered by a 455-horsepower 3.6-liter V-6, and have a cat-back dual exhaust. There’ll be 20-inch shoes, rocker panel extensions, a body-color matched grille, and plenty of Syclone badges. You can get it clad in any hue that GM makes for the Canyon, though the original Syclone was only offered in black and if you’re getting a 2019 variant, you should opt for black, too.

While 455 horsepower probably isn’t enough to wallop any modern Ferraris, SVE pledges the Syclone will be absurdly quick and we’ve got no reason to doubt them. The cost isn’t terribly expensive, with the base 4WD Canyon truck requiring $32,195 and the Syclone conversion kit running another $39,995 on top of that.

Lastly, in case you’re wondering why the hell GMC didn’t spell it “Cyclone,” it’s because Ford had that name on lockdown, so GM just slapped an “S” in there and called it a day.