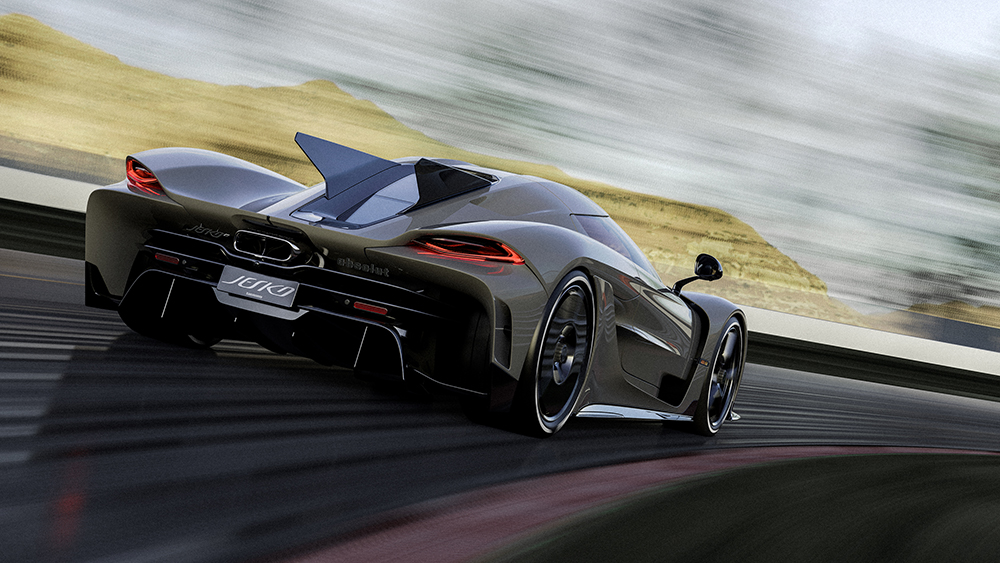 The Jesko Absolut is Koenigsegg’s fastest supercar ever, and it will be forever.

On Tuesday, the Swedish marque unveiled the brand new “land-based rocketship” and declared it will never endeavor to make a quicker model. While its top speed has yet to be determined, judging by the stats, three digits are on the horizon. The automaker says simply that the new model will be “unbelievably fast.” That’s all thanks to a low-drag configuration and clever aerodynamic elements. Essentially, Koenigsegg has packed 1,600 horses into a 3,064-pound supercar and reduced its maximum downforce to just 333 pounds.

Touted as a “stealthier interpretation” of its track-focused predecessor (the Jesko), every inch of the carbon-fiber ride was constructed to reduce drag. Koenigsegg replaced the Jesko’s massive rear wing with two fighter jet-style fins, elongated the rear hood and adjusted the air intakes to help with flow. In total, the marque spent more than 3,000 hours on aerodynamic analysis, plus 5,000 hours on engineering the car. The end result is a drag coefficient of just 0.278. By comparison, modern automobiles generally have a drag coefficient between 0.3 and 0.4.

The Jesko Absolut (right) and the Jesko (left)  Koenigsegg

Under the hood is a twin-turbo 5.0-liter V8 capable of punching out 1,280 horses and 738 ft lbs of torque when feed regular gasoline. Swap to E85 and the car can deliver 1,600 hp and 1,106 ft lbs of torque. The engine is connected to a nine-speed “Light Speed Transmission” system which, according to Koenigsegg, can change gears “in virtually zero time from any gear to any other gear—regardless of how many gears are skipped.”

While it may seem as though this beast belongs on a race track, Koenigsegg says it’s a comfortable daily driver. It can fit two people, plus plenty of luggage and still maintains its 1:1 weight-to-power ratio. What’s more, you can live out your drop-top dreams as the roof can be stowed in the front of the car. Price and production details are still to come.

The Jesko Absolut (right) and the Jesko (left)  Koenigsegg

If the Jesko Absolut tops 304.77 mph, it’ll take the title of the world’s fastest supercar from the Bugatti Chiron Super Sport. Bring on the speed runs.