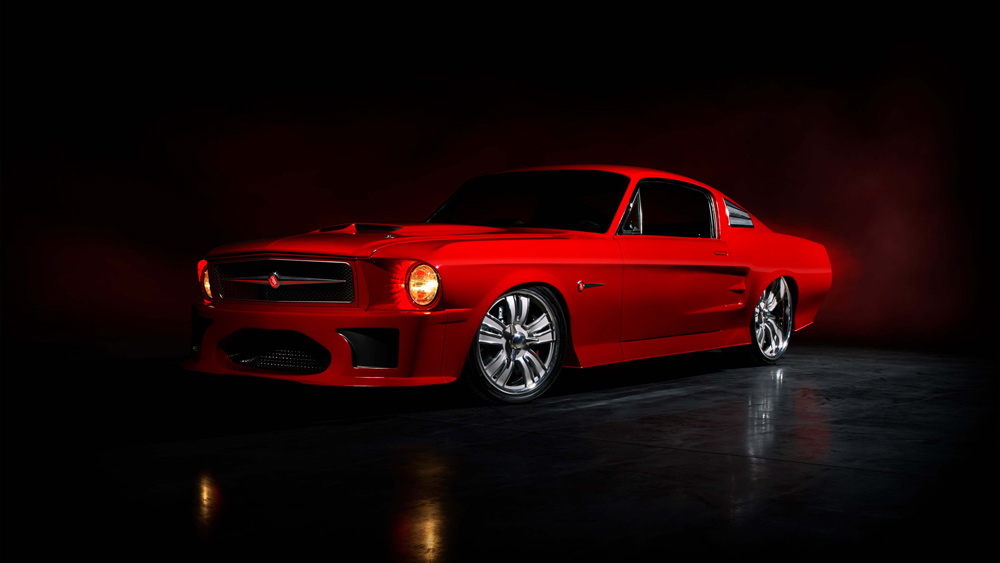 Ever since the movie Gone in 60 Seconds presented Eleanor as its star car, restomod Mustang fastbacks have dominated the imaginations of both custom builders and Mustang lovers who appreciate the combination of classic style and modern American muscle. And let’s face it, there are few cars more evocative of speed, swagger and sheer seductive appeal than a long, low fastback ‘Stang with a fire-breathing Ford crate engine and modern underpinnings.

Now, Kendall Motor Oil has written the check to build a one-of-a-kind Mustang restomod called, appropriately, The Kendall Custom, inspired by Carroll Shelby’s 1967 Shelby GT500 and featuring the components and handiwork of more than 20 standouts in the automotive industry. To be sold by Mecum Auctions on January 15 in Kissimmee, Fla., this one-off is special for more than just its unique build. All of the proceeds from the sale of the car will go to Curing Kids Cancer, a nonprofit organization founded by Grainne and Clay Owen in 2005, two years after their son Killian passed away from leukemia at the age of nine.

“It takes approximately $25,000 to help a child receive a lifesaving treatment that’s been developed for leukemia and other cancers,” says Grainne Owen, the organization’s co-founder and president. “We anticipate the proceeds from the car sale to potentially help save the lives of multiple children, and that’s truly amazing.”

A one-of-a-kind build, the 1,080 hp Kendall Custom will be offered through Mecum Auctions on January 15 to benefit Curing Kids Cancer, a nonprofit philanthropy.  Photo: Courtesy of Differential Imagery.

While that’s reason enough to keep bidding on the boil, there’s also the 1,080 hp, 5.0-liter twin-turbocharged Ford “Coyote” V-8 engine by Garrett Advancing Motion. That monster mill, shifted by a Ford six-speed automatic transmission hooked up to a Strange Engineering 9-inch differential, is stuffed into Dynacorn Classic Bodies’ exact replica of a 1967 Mustang fastback shell. Dynacorn is a manufacturer familiar to anyone who has ever fantasized about a ground-up restomod build. In this case, the vehicle’s overall construction is the handiwork of Thompson Street Customs (TSC) in Denver, Colo., who masterminded the project. The Roadster Shop’s Fast Track chassis is a work of metallurgical art, while exterior and interior billet pieces accent the brilliant Kendall Red paintwork custom-mixed and painted by TSC. And Baer disc brakes hide behind Custom TSC-designed wheels, while Pirelli rubber fill out the corners.

Inside is where the action is, and it’s a whole lot more luxurious than any GT500 Ol’ Shel ever made. While the interior tips a hat to the styling cues of the original 1967 Mustang, it takes the concept to a new level of extreme. Created by Eddie’s Rods and Customs of Pueblo, Colo., the cabin is trimmed in black leather and suede, accented with red stitching and red Dakota Digital gauges, along with lots of machined and polished billet aluminum from Lokar Performance Products. Vintage Air keeps things ice cold, while a Kenwood custom sound system with JL Audio amps and speakers plays backup to the main act: twin Garrett turbos spooling up more than a thousand horses.

Anyone who has built or commissioned a restomod of this caliber understands the commitment of time and resources (read that as dollars) required to achieve a concours-level result. This car has it, and knowing that the price paid by the top bidder goes to a higher purpose makes putting pedal (or paddle) to the metal seem all the more worthwhile.