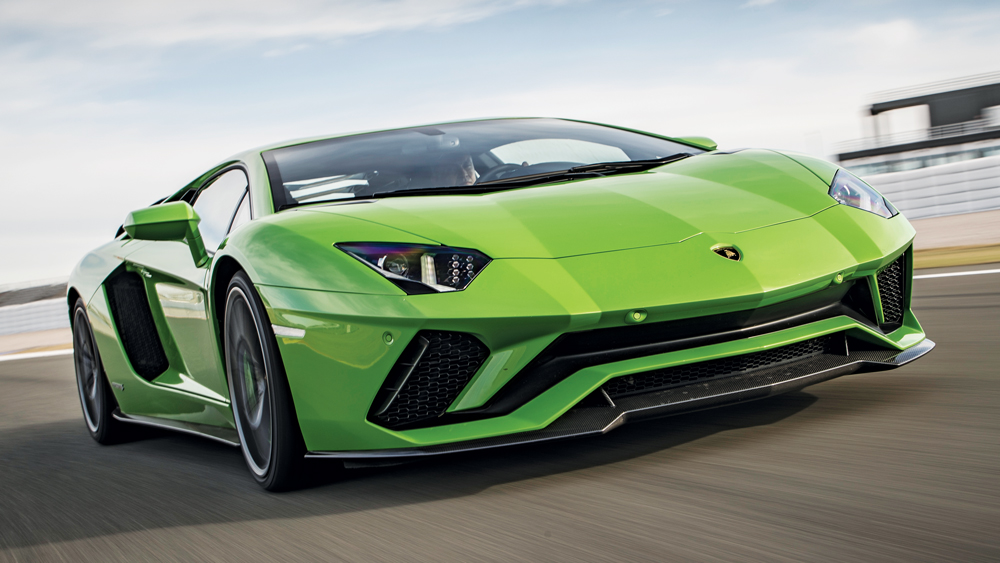 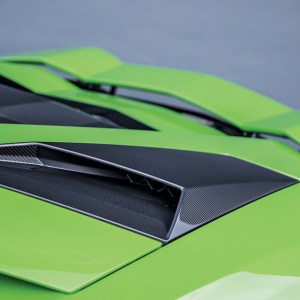 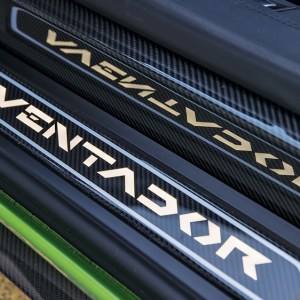 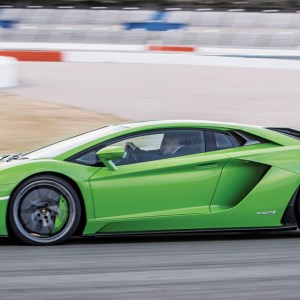 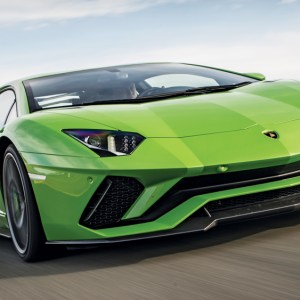 A host of upgrades make the Lamborghini Aventador S nimbler and even more thrilling than its predecessor.

It didn’t take long to experience some of what’s special about the new Lamborghini Aventador S. Mario Fasanetto, Automobili Lamborghini’s senior development driver, was leading two other drivers and me on our first lap around Spain’s Circuit Ricardo Tormo racetrack when the gray car just ahead of my white one climbed the curbing at the apex of a turn. As the rear tire transformed the yellow and black paint on the track into powder, the driver accelerated too hard, sending the vehicle sideways and creating a test of my reflexes and my car’s agility.

The Aventador S’s new four-wheel steering system reacted instantly when I flicked the wheel, enabling me to avoid contact and possible disaster. Adrenaline-fed laughter cascaded from my diaphragm as I blasted toward the next curve. Few cars can produce such a moment.

Introduced in 2011, the Aventador was never just another car: It was a daring advance. A carbon-fiber tub and aluminum subframes in the front and rear formed the chassis. The body was skinned with carbon fiber and aluminum. Lamborghini had the audacity to plant a 6.5-liter V-12 in the middle, using all-wheel drive to allocate the torque. The car proved a success for Lamborghini, with production reaching about 6,000 units in the first 6 years.

Now the Aventador is being replaced by the Aventador S, which is available now for just over $421,000. Compared with its predecessor, the Aventador S incorporates an unprecedented number of updates and refinements, according to Lamborghini R&D director Maurizio Reggiani. “In 23 years with Lamborghini, I never made a face-lifting that was so full of new content,” he says.

The improvements begin with a 5.4 percent horsepower increase from the naturally aspirated 48-valve, 6.5-liter V-12 engine. The gains come from revisions to valve timing and air-intake management, which also enriched the torque curve. As I experienced when exiting the racetrack’s corners, the engine delivers abundant torque from the moment you press the accelerator until the peak of 508 ft lbs arrives at 5,500 rpm—which is midrange in a rev band that reaches 8,500 rpm. The engine tweaks enable the Aventador S to accelerate from zero to 62 mph in 2.9 seconds and from zero to 186 mph in 24.2 seconds. Top speed is 217 mph. The brakes, which have monstrous carbon-ceramic rotors, will bring the car to a stop from 62 mph in just 101.7 feet.

Lamborghini also wanted the Aventa­dor S to produce a better sound than the Aventador, so the exhaust system, now made of titanium, integrates a new muffler and resonator, and it culminates in three outlets in the center of the rear bumper.

After a few laps, we pulled the cars into the pits. The scissor-style doors haven’t changed—you still open them by hooking your index finger under the pull and giving a backhand flip upward on the handle. The brakes were hot, but the great stench—like that of an industrial accident—came from the tires. During the development process, Fasanetto worked with Pirelli’s engineers to create exclusive P Zero rubber that provides higher lateral-acceleration rates and reduced understeer. The sticky tread wears out fast, though; it left “marbles” all over the track and on the faces of the cars. If you drive this car hard, expect to go through tires fast.

Interior updates include a new instrument display—a brilliant and broad thin-film transistor screen that changes with the selection of driving mode. In addition to the Strada (street), Sport (mountains), and Corsa (track) settings, there is Ego. It lets drivers individualize each of the three modes within parameters for traction, steering, suspension, and torque allocation from the all-wheel-drive system.

Lamborghini also added Apple CarPlay and a telemetry system that communicates track-performance information and trip data. Despite a dated layout—the Aventador S is not in the game with the Ferraris that have dual-cockpit displays—the interior is comfortable and luxurious.

Interior updates include a new thin-film transistor instrument-display screen that changes according to the driving mode.  Charlie Magee

Walking around the car on pit lane, I could easily see changes Lamborghini made to the Aventador’s bodywork. When reshaping the car, the design team considered ideation boards displaying images of snakes, spaceships, and jet aircraft. The snake appears in the visage of the Aventador S, with slit-eye headlamps and fanglike elements in the bumper. As always, the precepts of Marcello Gandini, the originator of Lamborghini’s design heritage, inspired the staff in Centro Stile. “In every drawing and every car, he is in our soul,” says Mitja Borkert, the brand’s head of design. The upward-sloping crease of each rear-wheel arch evokes Gandini’s Countach.

The more aggressive-looking nose and longer front splitter of the Aventador S help to generate 130 percent more downforce and 50 percent better aero efficiency—the ratio between drag and downforce—when the three-stage rear wing takes its optimum position. But unseen parts of the car do a disproportionate share of the aerodynamic work. “The underbody is the area where we have much more freedom,” says Reggiani, referring to drag reduction by means of pressure recovery when the undertray channels airflow.

The rear diffuser’s prominent fins—the most obvious change to the exterior—look like bristles and combine with the three exhaust pipes to make a final, malevolent assertion to onlookers.

During lunch, the pit crew installed new Pirellis for the afternoon’s drive. Departing the track, we wended through limestone mountains in the Hoya de Buñol district of Valencia province, through vineyards and olive groves, before reaching Dos Aguas, a pretty village situated about 1,300 feet above sea level. During the drive, the Aventa­dor S assumed the role of what once was called a pleasure car: a civil and supple vehicle that is up for a bit of touring.

Despite the car’s 20-inch front wheels and 21-inch rear wheels, the ride was comfortable, even over indifferently maintained roads. The excellent ventilation system kept the glass from fogging as a light rain fell, and the heated side-view mirrors dispersed any buildup. The V-12’s stop-start system was unobtrusive at intersections, and when the car rejoined the autopista for the return trip to Valencia, one cylinder bank shut down for efficient cruising.

Of all the upgrades to the Aventador S, the most significant may be the four-wheel steering—the feature that helped me avoid a collision on the racetrack. This is the first Lamborghini production car to include Lamborghini Dynamic Steering, as it’s called. The system seemingly shortens the wheelbase by nearly 20 inches during low-speed maneuvers. Actuators push the rear wheels—which are close to 14 inches wide—up to 3 degrees in counter phase to the front wheels, helping the chassis to rotate. At very low speeds, the turning radius decreases. At 75 to 80 mph, depending on cornering forces, the actuators pull the rear wheels into phase with the front ones, in effect stretching the wheelbase and adding stability through the bend.

With four-wheel steering, it seems as though the Aventador S has gained a set of hips that shift judiciously one way or the other, enabling it to throw down some truly impressive moves. (lamborghini.com)