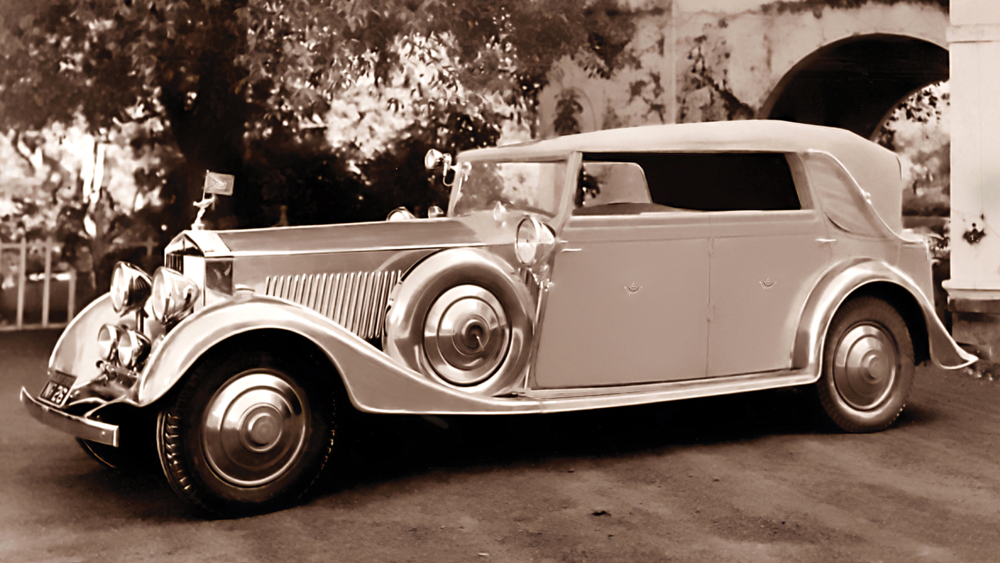 When Rolls-Royce launches the all-new Phantom in July in London, the car will be accompanied by an important example of each of the seven previous Phantom series. Representing the second series will be the Star of India, a one-of-a-kind 1934 Phantom named after the 563-carat sapphire from Sri Lanka that’s now in New York’s American Museum of Natural History. The car features saffron-colored paintwork symbolizing the purity of Hinduism. The fenders and hood are a brilliant polished aluminum to reflect the intense Indian heat. Etched into each door, the hood, and the glass of the side windows is the crest of Rajkot, one of India’s pre-independence princely states. Above each crest is a Sanskrit motto that translates as, “The one who fulfills the obligation of the happiness and welfare of his people is their ruler.” The car was specially ordered by Shri Dharmendrasinhji, who at the time was the maharaja of Rajkot.

Shri Mandhatasinh Jadeja, a great-grandson of the maharaja, acquired the vehicle in 2010.  Photo: Courtesy

On the eve of their independence in 1947, what are now India, Pakistan, and Bangladesh comprised nearly 600 states, each with its own maharaja, or prince. For generations of Indian royals, Rolls-Royce was the marque of choice. They commissioned coach-built bodies to suit a variety of functions, from the formal motorcade to the tiger hunt. Many of these unique cars with princely provenance still exist and are in private collections. Some, like the Star of India, belong to the descendants of their original owners.

Shri Mandhatasinh Jadeja, a great-grandson of Shri Dharmendrasinhji, acquired the Star of India for €644,000 at the 2010 RM Sotheby’s Monaco auction and brought it back to Rajkot for the first time since 1965. “Kings, maharajas, and rulers of India—heads of their respective states—considered the Rolls-Royce brand as the highest-quality automobile in terms of engineering excellence, status, luxurious interiors, and decor,” he says. “Over the years, the Star of India has been used by distinguished visitors to Rajkot on special occasions. Even Mahatma Gandhi and various dignitaries from India and England have graced the Star of India. It’s an object of great esteem and respect to the Rajkot royal house.”

The kaleidoscope lens through which we view British-Indian history allows for a multitude of distortions. Some beautifully embellish it; others magnify a troubled colonial past. But one tiny facet of the interplay between these disparate cultures wrought a handful of sparkling jewels, each sporting a Parthenon grille. The relationship between Rolls-Royce and the maharajas dates to the very early years of the automaker.

Rolls-Royce made its first impression on the Indian subcontinent in 1907, when a 40/50 hp Silver Ghost won a 620-mile trial, traversing six mountain passes between Bombay and Kolhapur. That performance helped the brand achieve a reputation for building tough, reliable cars that were also elegant and stylish. For Indian royalty, a Rolls-Royce represented the ultimate expression of wealth and power. By the early 1920s, the carmaker had established showrooms in Bombay, Calcutta, and Delhi. In the years leading up to World War II, about one in five Rolls-Royce cars were sold to Indian clients. Most of these customers ordered their cars delivered with coachwork, unlike the brand’s European clientele, who traditionally purchased a chassis and engine from the carmaker and then commissioned a coachbuilder to create a bespoke body. Some Indian customers bought in volume; the maharaja of Mysore ordered seven cars at a time, and the maharaja of Patiala owned 44 Rolls-Royce automobiles at the time of his death.

The maharajas and other wealthy Indian clients often requested opulent or eccentric embellishments for their cars, such as gold plating, ivory accoutrements, firearms, elaborate lighting, horns, sirens, and flagpoles. Many of the cars served as formal limousines. Some were made for transporting hunting parties, wives, other family members and household servants, religious objects, or even refuse. On more than one occasion, disgruntled Indian royalty directed their Rolls-Royce fleets to collect their city’s garbage. It was repayment for ill-treatment they had received during visits to Rolls-Royce’s London showroom, or for other perceived insults suffered while doing business with the carmaker.

Many of the commissions wrought remarkable creations, such as the Star of India, which was featured at the 2012 Pebble Beach Concours d’Elegance in a special class called Cars of the Maharajas. Another maharaja car displayed at Pebble Beach belongs to Sir Michael Kadoorie, whose Peninsula Hotel in Hong Kong is renowned for a fleet of green Rolls-Royce Phantoms. Kadoorie’s personal collection includes a first-series Phantom from 1925 that once served as the hunting car for the maharaja of Jodhpur. It’s fitted with two mounted 16-gauge shotguns for snipe shooting. “It is one of the nicest driving cars that I have been privileged to be a caretaker of,” he says. “The boattail body style draws admiring comments by enthusiasts and when the car stops at traffic lights.” One can imagine the impression it made in its day, when such a sight on Indian roads would have been as rare as a Bengal tiger is today.

Don Williams, president of the Blackhawk Automotive Museum and owner of the Blackhawk Collection classic-car dealership, both in Danville, Calif., has owned some of the world’s most significant cars, among them Rolls-Royce cars with Indian provenance. “They wanted anything except normal,” says Williams of the maharajas, “and Rolls-Royce did a wonderful job of being different.”

As an example, he cites a 1930 second-series Phantom built for maharaja of Rewa. The boattail rear deck, with yacht-like wood planks, opens to reveal a trio of shotguns and assorted pistols that were used during tiger hunts. “If you’re a real car guy,” says Williams, “your only limitation is your pocketbook and your imagination.”

Maybe the maharajas were just car guys after all.